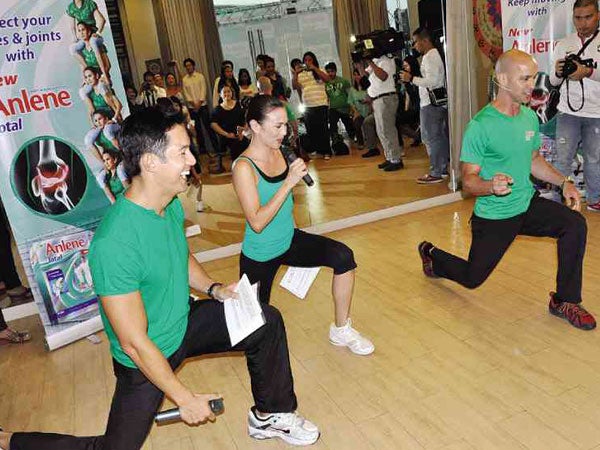 If the last time you remember drinking milk was when you were still in nappies, then it’s time to rethink picking up that childhood habit. Do it not just for your bones this time, but for those aging joints, as well.

When it comes to joints, we live with what we’re naturally given, as the cartilage in joints does not regenerate; they “wear and tear” with everyday movements as people grow older.

A sedentary lifestyle is just as bad for one’s joints, since it could lead to osteoarthritis. The first joints to go are the knees, hips and hand joints.

“When you don’t use the joint, it becomes arthritic, weak,” said Dr. Francis Altarejos, Philippine Board of Orthopaedics vice chair. “When you move, you pump synovial fluid, clear fluid which acts as lubricant, into the joints.”

The best we can do is delay the degeneration through preventive treatment, such as the intake of supplements like glucosamine, chondroitin and collagen, chemicals essential to joint health.

Fonterra, makers of milk brands Anlene, Anmum and Anchor, has recently come up with a new product that promises both bone and joint protection: Anlene Total.

The new milk formula, which comes in both powder and liquid form, was launched April 18 at Beyond Yoga Studio, Il Terrazo, Tomas Morato, Quezon City.

Hosting the event were Issa Litton and Marc Nelson. California-based fitness trainer Mark Wood demonstrated to guests how even normal, daily movements—sitting down and standing up, walking, picking up objects from the ground—put strain on the joints.

Anlene Total is Fonterra’s “enhanced platform on mobility,” said Anlene assistant brand manager Mary Louise Liao. “For someone who is mainly concerned about bone health, the regular Anlene is fine, but Anlene Total has an added component for joint care.”

That added component is glucosamine, an essential building block of cartilage naturally produced by the body, but which is reduced with age. Anlene Total also has twice the calcium found in regular milk (keeping true to its brand claim as the “expert in bone nutrition”), and is low-fat, for the diet-conscious.

Diabetics, pregnant women and nursing mothers, however, are advised to consult their doctors first if they can take Anlene Total, although the glucosamine in the formula has been proven safe, said Angela Kathrina Pablo, Fonterra Brands Philippines Nutrition manager.

Because Anlene Total is an “improved” version of Anlene, one need not drink both formulas simultaneously. Liao, an Anlene drinker since she was in college, said she likes to mix the milk with fresh fruits for a creamy drink.

What’s important is that one drinks Anlene Total regularly, said Altarejos. Coupled with exercise and a balanced diet (to prevent obesity, a condition that adds more load to the joints), this milk formula promises to help delay degeneration of the bones and joints, as well as keep one active and mobile. “But the earlier you start drinking milk, the better,” he said.