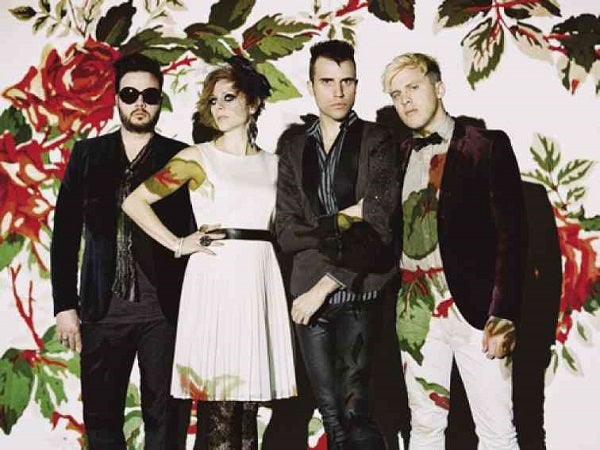 Neon Trees to light up Wanderland 2013

After gaining fame via the single “Animal” from its debut album “Habits,” followed by the second album “Picture Show,” the American band Neon Trees is gearing for  Wanderland 2013, a music and arts festival on May 18 at Globe Circuit Event Grounds in Makati.

Wanderland 2013 will also feature Temper Trap (Australia) Nada Surf (US), and local talents Up Dharma Down, Taken By Cars, Pulso, Yolanda Moon, and She’s Only Sixteen.

Also in the lineup are Avalanche City (New Zealand), Colour Coding and Tully on Tully (both from Australia).

Neon Trees bassist Branden Campbell talked to Inquirer Super on how the band got its name, its musical influences, among other things.

Your Filipino fans want to know how did you come up with the name Neon Trees?

We actually saw a sign with a neon palm tree on it, [a] forest with neon lights. And, it’s kind of more of a joke, you see that with some band names, bands that expect to become popular, like Pearl Jam, or Foo Fighters, or Green Day. So we decided that it will be Neon Trees.

Is it true that it was inspired by In-N-Out Burger signs?

The band first played in your hometown in Utah. How long did it take you to enjoy recognition?

The first show we ever did, there were about a hundred people. We waited for about two years, though, before we started going on tour…

How long have you been together as a band? How did you manage to stick with each other?

We’ve been together for about five years now and managed to be together by hanging out. Because you know, when you go to work with someone every day, and when the work is over, you’ll think “Oh, I can go home now.” But the people who go home with you, the moment you wake up, they’re gonna be there. And since your band is not earning any money yet, you have to share your bed with them.

It’s easy to get on each other’s nerves, especially when you have these creative people. I think it’s recognizing that, too. Letting it be a secret or being all weird.

Sometimes people need some space and it’s good to be that. It’s not that you don’t like each other, but everyone goes through that.

What are your music inspirations and influences?

I like classic rock a lot. These days, they have this surge of boy bands again and I just like band bands. And lady bands, too. I remember Tyler (Glenn, vocalist/keyboardist)… one night when someone, I think he was 20 years old, said, “He’s (Tyler) too old and he’s never gonna make it.” It’s funny that people have to say those things.

I think what really counts is a good song. I don’t care if you’re a guy or a girl, or you’re 16, or you’re even 10. If you have talent and you have a good song, you can stand up to your talent. That’s why there’s Whitney Houston, and the Beatles, and Taylor Swift. [Their] songs stand up to their talent.

Oh, they’re sweethearts. They’re professionals, good sense of humor, and they’re wonderful musicians. And they exercise a lot! (Laughs) That’s why they look so good.

In the album “Picture Show,” it is interesting to know that the songs are of different genres. How would do you describe the band’s sound?

Oh, I see it as an extension of [the original] Neon Trees. Neon Trees started with electronic dance music. And I think that when Elaine (Bradley, drummer) and I joined the band, we brought more of this live rock component to the band. We became more of a guitar band, then we got back to the electronic overtones on the record.

Does being a Mormon have an impact on your music?

Overall, there is a desire to love and to be loved, so it definitely comes out in our music. But I don’t think it comes from being Mormons. I don’t want to come out the wrong way, because there are some people in the band who aren’t Mormons, and I don’t know if they have that same intent in [our] music. So, it’s something that we try to coexist with and it’s not just from the religion aspect.

Can you tell us about Wanderland? What can your Filipino fans expect from the show?

We’re gonna have the “funnest” set of all the bands. I mean, all the bands are good, but ours are gonna be the best! And we’ll just have a good time!

What’s in store for Neon Trees this year? Is there anything that has been keeping the band busy lately?

We’re going to play in Hawaii, and Australia for a couple of days before we come to the Philippines. After the Philippines, we’re going to Europe and UK with Maroon 5. And we’re writing a lot of good music and we’re planning to release it worldwide. On a secret date. (Laughs) Come and meet us at Wanderland and take a picture with us and we’ll tell you more about the secret.