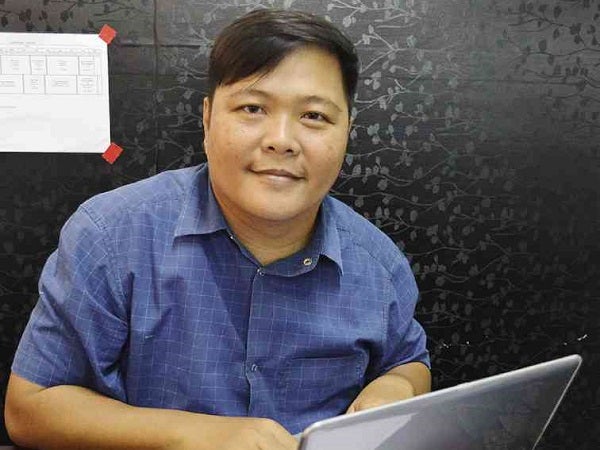 DENNIS TEODOSIO, who has had 9 one-act plays and one full length work staged at the Labfest

Except in the year 2011, Dennis Teodosio holds the distinction of being the only playwright to have been produced in every single installment of the Virgin Labfest (VL) since it began in 2005.

VL has grown into a much-anticipated annual event where new plays are given their world premieres—usually at least nine new one-acts per festival.

The fest is organized by Writers Bloc, a playwright group founded by Rody Vera that holds free critiquing sessions for established and aspiring playwrights, and Tanghalang Pilipino (TP), resident theater group of the Cultural Center of the Philippines.

Teodosio has had a total of nine one-acts, up to two per festival in some years, staged for VL.

Last year, he submitted a full-length play. His “Totong Hilot,” about a boy who yearns to become a hilot like his grandfather, was selected to be staged.

It is his first full-length play for VL, but actually the 18th full-length from his prolific output.

“I’ve been writing two to three full-lengths a year since 2007. I write plays because it’s cathartic. I am more familiar with writing one-acts, but the experience of writing full-length plays is more orgasmic,” says Teodosio.

The first play he ever saw was Orlando Nadres’ “Hanggang Dito na Lamang at Maraming Salamat” at Philippine Educational Theater Association’s (Peta) former theater in Intramuros. “After watching Rody Vera’s ‘Ralph at Claudia,’ I started to get a feeling that I could write plays,” he points out.

Teodosio had done work in communications-related fields such as advertising, public relations, events and corporate communications before he shifted to scriptwriting and playwriting.

Alongside his playwriting, he has had scriptwriting “day jobs,” initially with Star Cinema and ABS-CBN, and currently with a television network in Myanmar.

In 2000, Vera invited Teodosio to join Writers Bloc. “I didn’t think I could do it,” says Teodosio, “but Danton Remoto once told me that I was very dramatic when I recounted stories and that I could write. So I pushed myself to write.”

Writers Bloc has been “tremendously helpful,” he adds. “I’m able to polish my works from the comments of other playwrights. You learn from their experiences, tips they’ve formulated from their own writing experiences.”

His first play, “Gee-Gee at Waterina,” a fictionalized conversation between two characters based on Justo Justo, founder of the Home For The Golden Gays, and Walter Dempsey Jr., more popularly known as Walterina Markova, a sex slave during the Philippines’ Japanese occupation, received its world premiere at the very first VL.

And it was a Writers Bloc writing session that spawned it. “Playwright Rene Villanueva challenged us to write about two people having a conversation and their realizations. He eventually became my mentor. He told me to prepare myself because I would give birth to many plays. I think his prediction has come true. I hope I can properly raise all these plays I’ve delivered,” he says, laughing.

While VL exposes audiences to new works and provides opportunities for actors, directors and backstage collaborators to hone their craft, the fact that it is primarily an endeavor “to encourage Filipino playwrights to create new works and define new perspectives in contemporary Philippine drama” is sometimes subsumed by the fest’s large scale.

Nonetheless, while no formal auditing has been done yet, a sample survey of past VL playwrights affirms that inclusion in the fest does help spur restagings of their plays.

All of Teodosio’s past VL plays have been restaged numerous times by university-theater groups throughout the country.

Directors and producers also monitor the fests. Because of his exposure in VL, Teodosio has been commissioned by Gantimpala Theater’s late artistic director Tony Espejo to write “Jack and the Beanstalk” and “Ang Pagong at Matsing,” both children’s musicals, and by Peta to write two musicals for its clients.

His advice for aspiring playwrights who wish to join VL (the festival accepts entries annually, even from non-Writers Bloc members) is: “Sugod lang nang sugod” and, if selected, to enjoy the process. “I’m one of the few playwrights in VL who keeps on revising during rehearsals. That’s my learning arena. I tweak the text for the director, the cast, the audiences.”

VL and CCP will host a Playwriting Fellowship Program this year for college students and young professionals 29 years old and below to be taught by Glenn Mas. There will be a scriptwriting workshop, lectures, discussions and script critiquing.

Accepted applicants will have a chance to interact with known playwrights, directors and actors during their rehearsals for VL. The program concludes with a staged reading of the fellows’ works.