‘The King and I’ with Nonie Buencamino and Menchu Lauchengco-Yulo–now much more than a battle of wits | Lifestyle.INQ ❮ ❯ 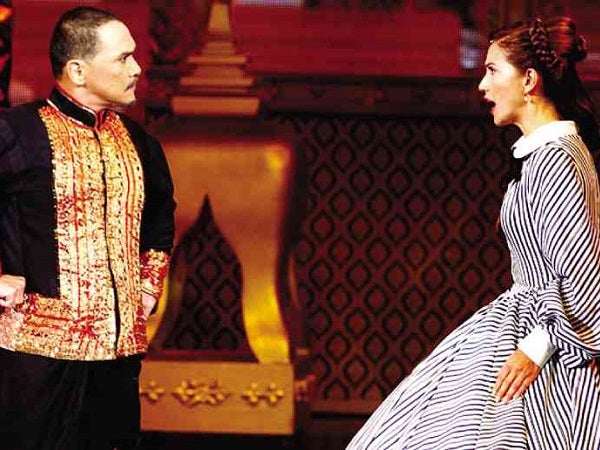 The romance could never be overt. Still, at the end of the day, it is the relationship between the titular characters in Rodgers and Hammerstein’s “The King and I,” and the actors who play them, that can make or break any new incarnation of this beloved musical.

The phrase “sexual tension,” especially between a foreign ruler with many wives and a proper British widow, was unheard of in the early 1950s when the musical first opened on Broadway, topbilled by Gertrude Lawrence and Yul Brynner, who went on to immortalize the role of the Siamese King from his very first performance.

Modern audiences have come to regard “The King and I” as family theater—safe, clean, fun and appropriate for children. But back then, it was a Western audience’s first exposure to the might and pomp of an unapologetic Asian ruler whose ways were a radical departure from a Christianized, monogamous, prim-and-proper First World.

As drama critic Richard Watts Jr. described it in his review of the very first production in 1951, the audience witnessed “an East of frank and unashamed romance, seen through the eyes of … theatrical artists of rare taste and creative power.”

Anna, with her circular Victorian-era petticoat designed to define the boundaries that a woman should have with a man, was the odd lady out in a royal court where a very emotionally secure Head Wife supervised and guided younger wives and mistresses who were not afraid to show off more than a little skin. Anna’s courage to speak her own mind and stand her ground was a challenge to an autocratic ruler who was used to getting his own way.

The King may be called a misogynist, bigamist and chauvinist by today’s standards, but there was no denying his love for his kingdom, his charismatic power, and the inspiration his leadership provided.

The glory and grandeur that is 19th-century Siam are breathtakingly captured in Resorts World Manila’s production of “The King and I.” The production design team—lights designer John Batalla, set design and construction head Jo Tecson, and costume designers Rajo Laurel and Aksana Sidarava—transport the audience to glittering palace chambers, an awesome dockside port, a short but impressive tour of the main city, and the front seat to the now-famous Siamese dramatization of an American novel on slavery.

What is impressive about the production design is that it does not call attention to itself, despite its lavishness. The spectacle supports the actors and the unfolding of the plot. The scene changes, while impressive, are done seamlessly and smartly, like a magician’s sleight-of-hand.

Director Freddie Santos assembles an impressive cast, most of whom have matured over their roles in time. My first viewing of this production was last October with Leo Valdez and Monique Wilson in the title roles. The second was a few weeks ago, with Menchu Lauchengco-Yulo and Nonie Buencamino now playing Anna and the King.

The supporting actors like Tanya Manalang as Tuptim, Lorenz Martinez as Lun Tha, Richard Cunanan as Captain Orton, and James Ketcher as the young Louis have fit snugly into their roles, acting them like a second skin.

Two gentlemen in the cast have added a bit of depth to their performances: Anton Posadas as the Crown Prince has mellowed, letting us see the struggle between the emerging ruler and the little boy; while Richmond Tan as the King’s right-hand man has laced his sheathed arrogance with just the right streak of vulnerability.

Gina Respall as Head Wife Lady Thiang is one of the pillars of this production. The authority and dignity in her performance matches Anna’s Western pride, and is an effective argument against any European assertion that feminine submission to her man automatically means unthinking, humiliating subservience.

Her interpretation of her key song, “Something Wonderful,” brought the house down in both productions. This number is a complex one, far from the simple encouragement that it supposedly says. It is a declaration of one mature woman to another of the love they both share for the same man—and her acceptance of this situation if this arrangement would lead to a happier husband and a better monarch.

Respall’s performance was slightly different in the Buencamino-Yulo production, and it may very well be revealing. There was a tinge of anger in her admonishment, an exasperation at her fellow woman to leave her pride aside and help their king. The emotion did not come out just as irritation or impatience; it was frustration at Anna’s stubborn denial of what she (Anna) really feels for the ruler.

None of that rumbling volcano was present during the Valdez-Wilson version, where Respall’s Thiang was simply sisterly and encouraging.

But it was that “Something Wonderful” number—which had to state the obvious to a more innocent age in the ’50s—that also cleanly identified the relationship between the King and Anna in the Valdez-Wilson version.

It was only after that number was sung that some semblance of sexual tension manifested itself between Valdez and Wilson.

Valdez and Wilson sung their numbers beautifully, but very little of the unspoken romance of their characters could be detected on stage. Their chemistry was more of two platonic kindred spirits who found common ground in a cause they could fight for, and much to respect in each other.

Their dueling was an intellectual chess game, a battle of wits between two polar opposites who would somehow become friends.

With Yulo and Buencamino, it was a dance that drew them to each other against their will. Hence, Respall’s Thiang, acted opposite Yulo, became a mirror of the emotions that Anna had tried to bury and submerge.

Buencamino’s King and Yulo’s Anna were attracted to each other precisely because of their differences; they needed what the other had to accomplish what they were supposed to do. And while Valdez’s King was a preening, aspiring wise man, Buencamino’s was a short-tempered, impatient little boy who could not do quickly the things he wanted to do.

He would lash out angrily if his demands were not met, and there is no mistaking his wanting to bend Anna to his will (in more ways than one).

The professional contest between Yulo’s Anna and Buencamino’s King transformed into the personal, when the latter became the means to accomplish the goals in the former. The clash of ideas turned into grudging admiration, and the ability to influence and persuade the other became the key to win his or her heart, such that Anna’s rejection of the King’s traditional whipping of a former slave who had cuckolded him broke his heart and drove her away.

The selection of the act of whipping the runaway Tup Tim as the proverbial straw that broke the camel’s back is integral to the story. The King’s assertion of his rights over his many wives, and Anna’s defense of the dignity of the woman, captured the depth and nature of their conflict that could never be resolved in their era.

Fortunately, some things did work themselves out. The Crown Prince’s abolition of the act of kneeling before the King was certainly an influence of his British governess.

In a sense, Chulalongkorn was the cultural love child of the King and Anna. The blocking of the last scene, different from that in the movie, certainly pointed to it.

As the new young King makes his dramatic stand to make his proclamations, everyone gathers to him, including his mother Lady Thiang and the Prime Minister. Only Yulo’s Anna sees and goes to Buencamino’s King as he draws his last breath.

It is a moment when the two are finally alone, with no diplomatic, moral or legal parameter to consider.

The blocking was the same as that in the Valdez-Wilson version. But then, everything was too hurried. The death of the King almost became a mere footnote to Chulalongkorn’s ascension. There was no time to savor the loss of a character the audience had come to love.

But in the latter production, Yulo and Buencamino got it right. The silent acknowledgement of what they meant to each other and their respective kingdoms was felt before the King moved on. The young and rising King at center stage was the continuation of that love and that legacy.

It was closure and a salute. One wishes, though, just for the lingering of the spotlight on Anna and the King to make the moment last.

“The King and I” runs at Resorts World Manila until May. Visit www.ticketworld.com.ph or  www.rwmanila.com, or call 8919999.