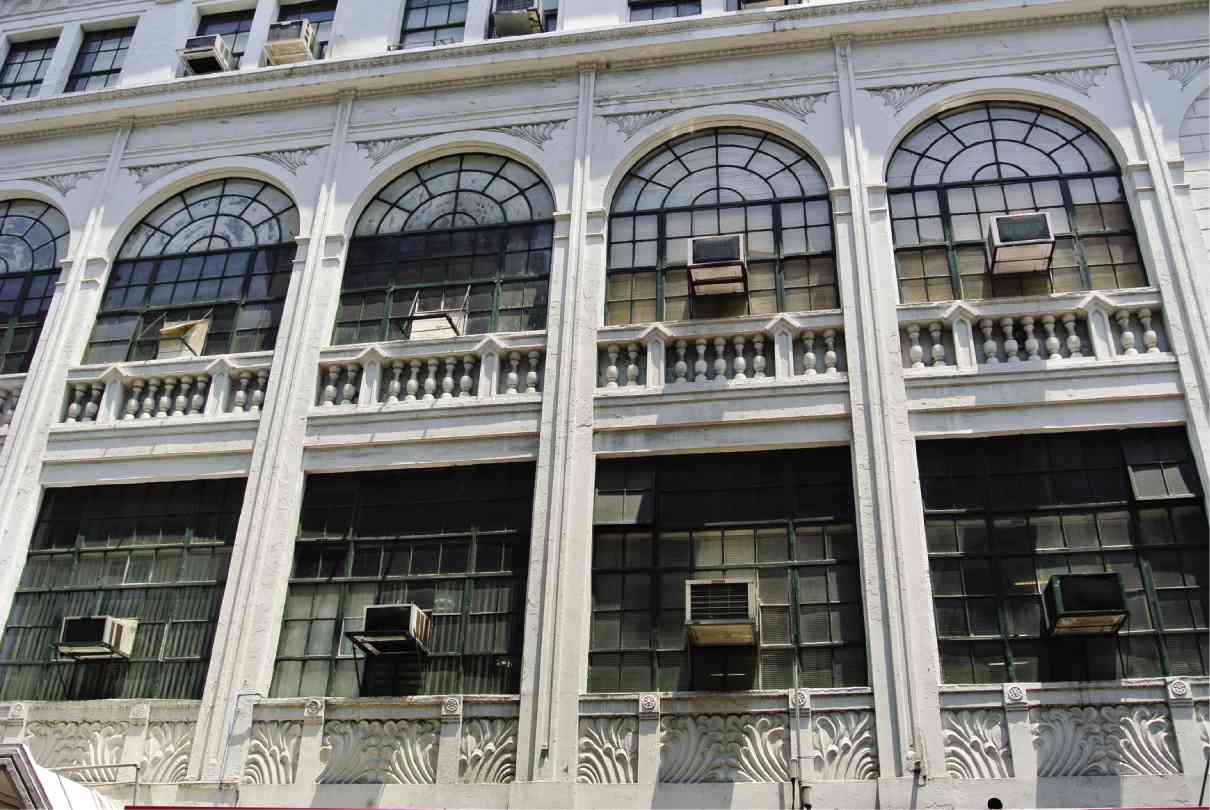 ELEGANT façade of the Regina Building, which was designed by Andres Luna de San Pedro

Remember Escolta?  It is the street running parallel to the Pasig River that once was Manila’s premier commercial location.

Escolta  is talked about in the past tense these days, but a primer published by a group called 98B brings out little-known or forgotten facts about the area with the hope of bringing it back to the Manileño consciousness.

First, about 98B:  it is a multidisciplinary art “COLLABoratory” that connects artists, designers, musicians, curators, writers, students, and anyone else involved in the arts and culture sector.

The group provides a venue where anyone in the arts and culture sector can gather and talk, to present their work in different ways—through a talk, publication, sharing a meal, or organizing a bazaar.

The group organized a bazaar a few weekends ago at the Escolta.  Its success strengthened 98B’s resolve to revive Escolta by working hand in hand with the Escolta Commercial Association Inc. (Ecai), the association of Escolta building-owners.

The reintroduction of Escolta in 98B’s primer begins with walking from Carriedo Fountain at the Plaza Sta. Cruz (nearest LRT1 station is Carriedo), from where you walk on the bridge across the narrow estero to enter Escolta.

Stop  at  First United Building (first structure after the estero), and check out the Escolta Museum where images and building models of Escolta during its heyday are on display.  98B also has a gem of a gift shop on the building’s mezzanine.

The First United Building is  something to see, an Art Deco masterpiece dating from pre-World War II days.  Notable are the architectural details of the building, especially the stairs and geometric grillework.

Across the street is the dowager Regina Building, dating from the same period, whose tower flanks the First United Tower to provide a grand entrance to Escolta from Plaza Sta. Cruz.

Other heritage buildings on both sides of the narrow street are  Burke, Juan Luna and Panpisco Buildings, Capitol Theater, and TEOFF Center (formerly Natividad Building).

The ensemble of the buildings along the Escolta is one of the handsomest architectural settings in Manila which still manages to portray its days as the city’s center of power and finance before moving away to Ayala Avenue and Makati.

Escolta is a time machine.  The primer asks: “What don’t people know about Escolta?” It not only has much history, it is also the site of many “firsts” in the country.

First ice cream parlor in the country was Clarke’s, established during the early days of the American colonial period.

Other firsts to happen on the street were the first moviehouse; the first elevator, installed at  Burke Building; and the premier stop of the first Manila cable car, the tranvia.

Other firsts?  Movie and TV production outfits started out on Escolta, such as Dolphy’s RVQ and GMA 7.  National Book Store and Bookmark started out there as well.

Urban legend says that Jose Rizal’s remains were kept somewhere on Escolta before they were transferred to his final resting place at the Luneta.

The biggest misconception, says the primer, is that people think  all life has gone away from the street, leaving it dangerous and dark at night.  Not true.

Ecai is actively reviving the historical strip and the association does not take security for granted.  They are in close contact with city and police authorities, the local barangay, and keep it safe from petty crimes.

Restaurants?  There are all kinds of restaurants on the street.  Choose from among Uno Seafood Restaurant, coffee shops and other restaurants in the neighboring Binondo area, where excellent Chinese food and even vegetarian restaurants are found.

Soon 98B is opening a coffee shop.

Running parallel with 98B’s efforts to revive Escolta is the solid work done by  Ecai which has just celebrated its 25th anniversary.

Aside from assuring security, Ecai has done much to improve facilities in the area, especially in cleanliness, ensuring safe and well-paved sidewalks, and making the Escolta area more people-friendly.

Ecai’s primary mission is to renew interest in Escolta; to attract people to the area; and most importantly, to attract 21st-century businesses to the area, especially call centers.

Leading the way in attracting call centers to locate in the Escolta area is the almost-completed Juan Luna Building  on Juan Luna Street, Muelle de la Industria, on the Pasig banks.

Juan Luna Building was constructed in the early 20th century as the Philippine headquarters for what was then the First National City Bank of New York (now Citibank).  After years of abandonment, the building was restored, fitted out as a call center, and is now ready to accept its first tenants.

From seeing what is happening on Escolta, the revival of Manila is becoming more and more  a reality.

E-mail the author at  [email protected]