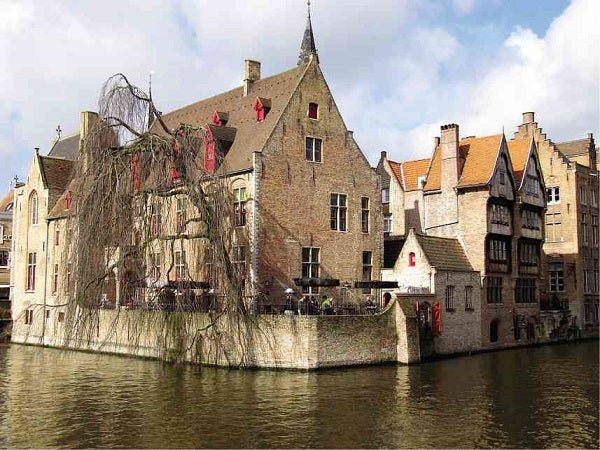 POSTCARD-PRETTY Bruges, Belgium, one of the stops during the Artistry II’s special christening tour PHOTO BY ALEX Y. VERGARA

It couldn’t have happened at a more fitting time. As a growing number of affluent Filipinos are discovering for themselves the beauty of going on a river cruise in Europe, a Filipino, Marilen Sandejas-Yaptangco, graced the recent christening of the Artistry II in Middelburg, the Netherlands.

As the ship’s godmother, Yaptangco, a travel industry veteran and president and CEO of Manila-based Baron Travel, wasn’t only the first Filipino, but also the first Asian woman to have been given such an honor.

“This isn’t just a feather on Baron Travel’s cap,” Yaptangco said a day later, and soon after a walking tour of the scenic and medieval city of Bruges, Belgium. “For a Filipino to be chosen as godmother of a ship is a big honor and source of pride not only for the Philippines, but for the entire region.”

In her long years in the industry, she couldn’t recall an instance when an Asian woman, let alone a Filipino, was asked to be godmother of a ship. It was always either a Caucasian celebrity or member of royalty who did the honors. It was also an indication, said Yaptangco, of Asia’s growing importance as a market for such upscale tours. (A typical eight- to 12-night river cruise anywhere in Europe could set you back $2,500 per person).

In all likelihood, it was also probably the first time the Philippine flag fluttered side by side with an EU-member and Avalon Waterways flags in any of the company’s ships.

Braving the nippy, winter-like Northern European spring, Yaptangco, assisted by ship captain Milos Laskovich and Avalon Waterways managing director J. Patrick Clark Jr., had to wear a black coat with ruffled details over a white, form-fitting and beaded jersey number by Nono Palmos, as she turned on the charm.

Instead of hitting the ship with a bottle of champagne like they did in the old days, Yaptangco swung a dangling one attached to a rope. Yaptangco finally succeeded in cracking the bottle on her fourth try, to the cheers of guests and spectators, including her husband Alex Yaptangco and their two children Miggy Sandejas and Rafa Yaptangco.

“Patrick kept on assuring me that it wasn’t my fault,” said an amused Yaptangco. “They later had to adjust the length of the rope to allow the bottle to hit the ship with maximum impact.”

The event, she added, became all the more relevant because she totally belonged to the industry. It would have been probably more expedient and newsworthy had they gotten, say, a famous Filipino celebrity or broadcaster, but that would have totally missed the point. Since Yaptangco’s company is the exclusive GSA or general sales agent of Avalon Waterways in the Philippines, she is, in effect, part of the company’s success.

It was also an acknowledgment, said Yaptangco, of the Asia-Pacific region’s growing importance to Europe’s tourism industry. Because of Baron Travel’s head start in promoting Avalon Waterways, the Philippines reportedly ranked first last year, beating much bigger and more affluent markets like Japan and China, in terms of the number of tourists who went on a river cruise holiday in Europe.

“It was Stewart Williams, managing director of Circuit Travel, Avalon’s GSA in the Asia-Pacific region, who first informed me in August of the company’s invitation,” said Yaptangco. “My first reaction was, ‘Why me?’ They answered back with a question: ‘Why not?’”

The Artistry II is Avalon Waterways’ newest ship among its 12-vessel (and counting) fleet cruising the rivers and waterways of Europe. Apart from belonging to the Switzerland-based Globus Family of Brands, which includes Cosmos and Globus Motorcoach (bus) Tours, Avalon has several joint ventures with private companies in China, Egypt, the US and South America to do river cruises there.

Since Baron became Globus’ exclusive GSA in the Philippines for its motor coach and river cruises more than 25 years ago, Yaptangco noticed that the company’s tour packages, particularly its river cruises, have become more diverse, and gained considerable ground among upscale and well-traveled Filipinos.

“First they go on an ocean cruise,” said Yaptangco, whose company is also the exclusive GSA of Royal Caribbean cruises. “As they venture further and try to discover what’s new, they start going on river cruises.”

During our four-day christening cruise, for instance, we had guided walking tours of Antwerp, Middelburg, Veere and Bruges (more on these attractions next time). We also sailed through several so-called locks, a mini-version, if you will, of the Panama Canal, which control the level and flow of certain European rivers to keep them from inundating low-lying cities and villages in their banks.

There was even an option for intrepid and outdoorsy guests, which included a sizable delegation of travel executives and journalists from the Philippines, to bike from Veere to Middelburg, while the boat sailed to the latter destination. Owing to the cold, damp weather, there were no takers.

Earlier, during the third day, a group, including this writer, opted to take a guided excursion to the Delta Works, a Herculean attempt of the Dutch government, through a series of mega dikes, pumps, sensors and monitors, to control floods, divert sea currents and reclaim sizable tracts of land from the North Sea in the wake of the country’s great flood of 1953.

Like in a typical ocean cruise, guests have the option to go on drive-by and walking tours, as the ship makes daily stops. They have no reason not to go, since such tours don’t require them to shell out additional money.

“A river cruise may seem more expensive,” said Yaptangco. “That’s because, unlike in ocean cruises, the shore excursions are already factored in as part of the price.”

Part of the christening package includes bus tours of certain sections of The Hague, as our group headed for an afternoon visit to the tulip gardens of Keukenhof. You need not be a flower lover to be amazed at the variety, color and texture of tulips. Now is the best time to visit the Netherlands, as tulips are currently in full bloom.

On our fourth day, a pair of brew masters from a small family-owned brewery in Belgium called Grutt gave guests a “culture and cruise” presentation on Belgian beers.

We thought beers were synonymous with Germany—until we learned that there were close to 1,250 breweries in Belgium, many of them non-listed family businesses. Germany can only boast of 350 breweries.

The ship’s seeming limitations have proven to be its strength, said Clark. On top of several deluxe suites with receiving areas or staterooms, a typical ship has 60 or so twin-occupancy suites and cabins, many with sliding picture windows.

For one, because of its limited size, it offers an intimate venue for its core market composed mainly of lovers, honeymooners and couples with grownup children. It also appeals to more mature pairs celebrating their wedding anniversaries and renewal vows.

Unlike in a titanic cruise ship, Avalon’s ships are much smaller, as they’re built to run through rivers and certain waterways. Thus, they don’t offer as many dining and recreational options.

The Artistry II, for instance, hosts  meals at its main dining venue, simply known as the ground-floor restaurant. For after-dinner drinks, tapas and entertainment, there’s the Panorama Lounge on the second deck.

The special run’s featured attraction during christening night was a band dubbed the A-GoGo. One of its lead singers is a Dutch national of Filipino descent.

“If you have young people looking for venues to dance all night and play video games, then this ship is probably not for you,” said Clark. “What we offer guests is a more intimate, more relaxed and more personalized experience.”

The Panorama Lounge, by the way, takes its name from the design of Avalon’s new generation of ships, including the Artistry II, called the panorama class. A typical twin-occupancy suite has a floor area of 200 square feet.

“The Artistry II is the fourth ship in our fleet belonging to the Panorama series,” said Clark. “The fifth one is going to be delivered in two days.”

People who feel dizzy at the slightest motion need not worry. Since Artistry II and its sister ships sail along rivers, guests are spared from being tossed like a salad by giant ocean waves. Except on a few occasions, our group hardly felt abrupt movements.

And to ensure their guests’ safety and comfort, Clark emphasized the fact that Avalon Waterways boasts of one of the youngest fleets in the business.

“We like to retire our ships young,” he said. “At six years of age, we think a ship has had a good run.”

For more information, please contact your preferred travel agency or Baron Travel Corp., general sales agent in the Philippines of the Globus Family of Brands (Globus and Cosmos Motorcoach Tours, and Avalon Waterways)  at tel. no. 8174926; e-mail [email protected] or [email protected] You can also log on to www.avalonwaterways.com.