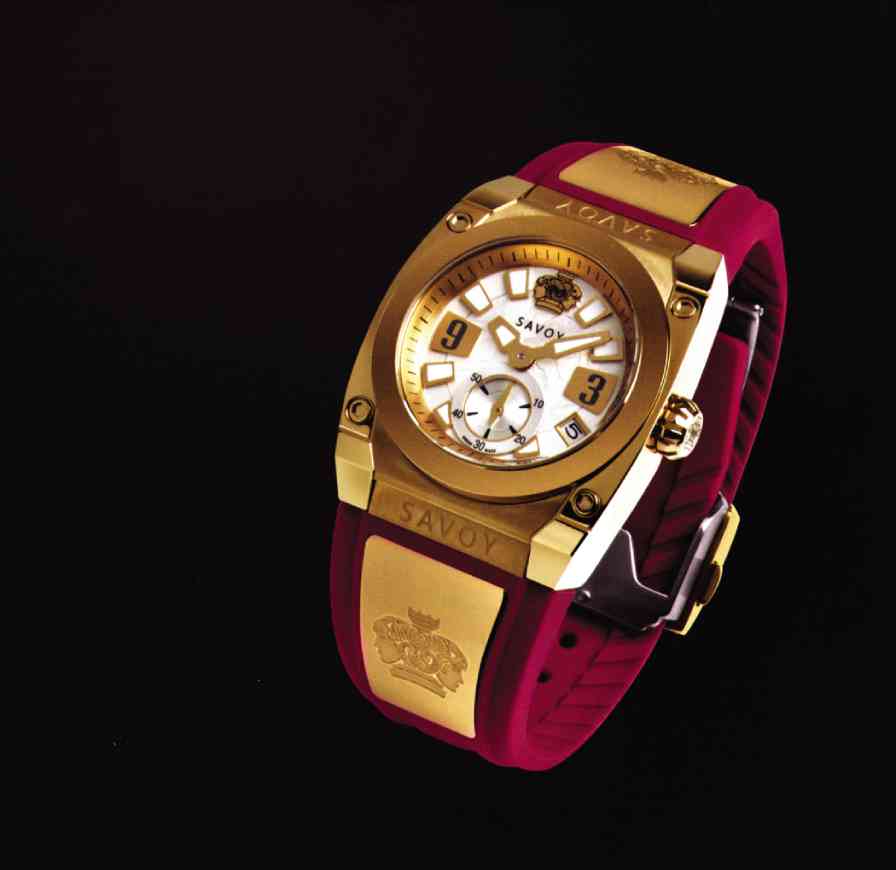 HOT PINK is the trend for Savoy ladies’ watch

If fashion tends to lack creativity and individuality these days, the same could be said with the cookie-cutter look of watches.

To get out of the  industry design doldrums, Pascal Savoy, president and CEO of Savoy Collections, came out with a watch with a unique casing and straps with changeable inserts.

“When retailers put out watches in their showcases, you can’t tell which watch belongs to which brand,” said Savoy (pronounced “savWah”). “We created a brand in which the watch shape is unique—the squarish barrel with a round face.”

The watch is also distinguished by the silicon straps with black or gold metal inserts that create a different look.  These accessories enable the wearer to customize the watch according to his or her liking.

“It’s completely new in the industry,” declared Savoy, who came to Manila to launch Asia’s first Savoy boutique at the New World Hotel. It is distributed by Timebound Trading, headed by banker Arthur “Chito” Bautista.

A prominent figure in the watch industry, Savoy, 45,   worked for the Richmond Group, which owns luxury brands such as Cartier, Piaget, Baume & Mercier, Montblanc. He then went to Florida to raise the profile of certain luxury watches and became president of Hublot in America.

In 2004, he established his own watch brand with his wife Lola as the vice president and creative director. The Savoy Collections is backed up by the Swiss-based International Luxury Group, one of the world’s leading fashion companies.

The watch appeals to two kinds of buyers—established individuals who buy $10,000 watches but are weary of overspending, and younger consumers who want to enter the luxury market without breaking the bank.

Savoy said many luxury brands are costly because of their high profile and image.

“The complication of the case, the movement (the mechanism that determines the time), and what you put inside influence the price of the watch. When you see Leonardo DiCaprio saying, ‘I love my Tag Heuer,’ or James Bond (Daniel Craig) promoting the new Omega, it costs a fortune to pay these people. The consumer pays for the marketing.”

Although Savoy employs the same high-end manufacturers that produce timepieces for the other luxury brands, he is conservative with his advertising.

“That’s why I created Savoy. There is no need to be expensive. You can have a nice watch that is different at an affordable price.”

Although Savoy is not a fashion watch that follows trends, it is attractive because of its understated elegance. The watch styles follow the current trend for big timepieces—40-45 mm in width compared to the standard 35 mm for men.

Although the women’s watches are 35 mm, they are still big for delicate wrists, yet chic enough as a bangle. The most popular styles come in gun metal as an option for black. Men also favor the carbon inserts.

On the other hand, women can change their inserts according to the seasons, such as white for the summer and black for the fall-winter. Hot-pink watches have been selling well and turquoise is making a comeback.

Savoy said high-quality watches bear the “Swiss Made” acknowledgement at the bottom of the dial. A “Swiss Made” watch must follow certain criteria. Foremost, it must have the Swiss movement. This means that the parts are Swiss in origin and must comprise at least 50 percent of the movement’s total value, and that the mechanism was assembled in Switzerland in a Swiss factory.

Further, the watch must be encased in Switzerland and the manufacturer is Swiss (Savoy hails from Geneva).

“If you follow these three legal criteria, then you can put ‘Swiss Made,’” which is something that you need to be careful of. Many brands claim Swiss movement or Swiss design, but it is not ‘Swiss Made.’ When they claim ‘Swiss Movement,’ the movement may come from Switzerland, but the parts or assembly may come from China.  They lure the customer into thinking it’s a good watch because it has Swiss movement. It may be better than some because of the Swiss movement, but it’s not a ‘Swiss Made’ watch. For us, it is important that we come as a Swiss watch. I am Swiss. This is a Swiss company. Everything is made and assembled in Switzerland.”

Great on the wrist

Asked how to distinguish the watch as a well-made accessory, Savoy said: “Even if I don’t attach it, see, it feels great on the wrist. The silicon we use is extremely soft. In metal, a certain weight is important. Some ladies’ watches are light because they are made of folded steel. It’s empty inside. A good-quality watch is made of solid steel. If the ladies’ watch is very light, then something is wrong.”

The executive added that details are important. “We sell  more chronographs (watches with stopwatch functions), which have counters and pushers. In the watchmaking industry, we call it complication. It tells you more than the time. In real life, do you use a timer? But it looks good on men’s watches. Men like mechanical  and intricate things. That’s why they are drawn to the chronograph.”

Or as the New York Times quoted a watch retailer: “It’s still the ultimate look-at-me.”