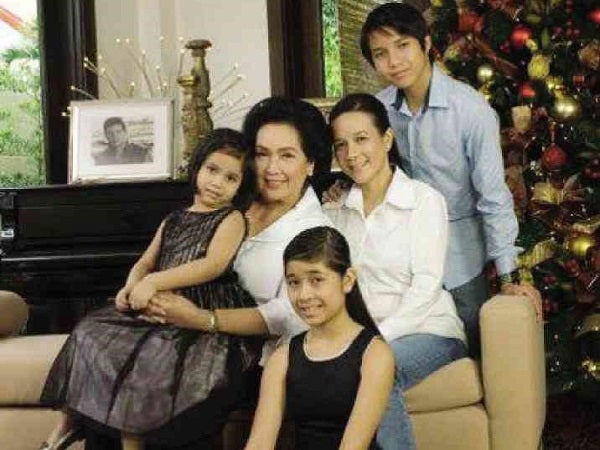 CHRISTMAS with Mama Susan Roces in 2010

Amazing grace. Poe-etic justice. These words have hogged the headlines the past week to describe the awesome victory that was given to now Senator-elect Grace Poe.

To those of us who had the privilege of working with her for two-and-a-half years while she was chair of the Movie and Television Review and Classification Board (MTRCB), the victory is just as sweet. Chair Grace, or simply Grace as we call her, was really more than just our chairperson or boss. Some of our colleagues had known her since she was a little girl: Liezl Muhlach-Martinez is her godsister; Manny Buising worked with Fernado Poe Jr. very closely for many years as his scriptwriter; Tito Benny Ternate has known her mother Susan Roces from her early Sampaguita days, and the list goes on and on.

Grace’s strongest suit as a leader is three-fold: She has excellent people skills; a keen and analytical mind that can see through even the most complicated cases; and she leads both with a firm and kind hand that is able to diffuse even the most tense of situations. Grace under pressure, that’s her. I saw it for myself many times in the period that we worked together.

However, they say that the true measure of a person’s success can be seen in the home, and even in this aspect, Grace has done very well. Perhaps it is also a tribute to the way her own parents raised her.

Brian, Grace’s eldest child and only son, graduated last March from the Ateneo de Manila University with an AB Political Science degree. In 2012, Brian was awarded the Harvard Project for Asian and International Relations Philippine Delegate and spent a term abroad during his junior year as a scholar at Fordham University.

After Brian are his two sisters, Hanna, 15, and Nika, 9, who were both born in the Philippines (“Even if I lived in the United States, I would come home every time to deliver my babies,” says Grace).

Hannah, a varsity football player and an incoming high-school junior, describes her mom as “somewhat overprotective,” to which her mom concurs. Shopping and watching “CSI” with her mom is a favorite past-time. “Although she’s somewhat strict,” says Hannah, “I can tell her anything. We have no secrets.”

Nika, on the other hand, enjoys playing board and video games and watching TV with mom.

“I’m not really the outdoor type of person, but we also go to the beach sometimes,” Grace says in an interview at Milky Way in Makati a few weeks before the elections.

The “strictness” over her children perhaps stems from her Grace’s own upbringing. “Mom’s requirement when I was growing up was to always go out with our own driver, and someone else always had to be with me. I guess my mom also never wanted me to be alone going home,” she says.

But Grace can entertain friends and guests, who were always welcome at the Poe residence in Greenhills.

“Mom always believed it’s best to meet them at home,” she points out, “so, with Hannah, I also encourage it so she can be more comfortable. And although I trust her, it also allows me to check up on her. You know at this stage you still have to really set the rules.”

Living in the US allowed Grace to be very hands-on with Brian and Hannah, an experience she looks back on with great fondness. “I cherish the experience because it allowed me to do everything. Hannah was already 7 when we came home (to Manila). She didn’t take to trusting the yaya because ako ’yong yaya niya.”

While Grace was very busy on the campaign trail, Nika spent a lot of time with her grandmother whom the children call Mama Susan (FPJ was Papa Ronnie).

Independence was something that Grace’s mom urged her to learn, she says. “Women should have their own career and not be dependent on their husband alone, but they must also be a help mate. She would also always remind me to enjoy the simple things in life. And being religious, my devotion to the Nazarene comes from my mom.”

Although raised by the King and Queen of Philippine movies, and spending most of her growing-up years in exclusive schools and in the upscale Greenhills neighborhood, Grace was never spoiled.

“My parents, may pagka-strict sila. The basic tenet was be a good person and be responsible to your audience. Once you go out of the house, you have to be proper and respectable, you have to be a lady.”

Although she may look fragile, those who know her well and those who have worked with her believe that she is far from being that. She developed her character and courage at a very young age, when she was around 7 or 8 years old.

As a little girl in the first or second grade, she had been bullied terribly and called names. It was this early experience of bullying that perhaps inspires her to protect children from violence of any sort or form.

“I think that incidents that happen to you as a child shape you, and the negative incidents sort of scar you for life,” she says. “Even if you have the support of your parents and your loved ones, it’s almost like an initiation rite that everyone goes through. People will always judge you—how you look, how you perform academically. What spells the difference is how you cope. The good thing is my mom was always there to listen to me. My dad, I didn’t tell him about it anymore. It really takes just one person who will listen to you. Eventually, I was able to move on from that sad experience… There were only one or two girls who made life hard for me as a child.”

She eventually moved to Assumption for high school where she says she found true friends and felt very welcome. Of her childhood nemesis, she says, “I bumped into her a decade ago. I think deep inside she knows who she is, and what she did to me. Pero wala na iyon.”

There is an oft-quoted line by the famous author Anne Lamott: “Grace will never leave you where it first finds you.” In Grace Poe-Llamanzares’ life, it has come alive in quite a phenomenal way.