The most unlikely places for hot and cool gigs | Lifestyle.INQ ❮ ❯ 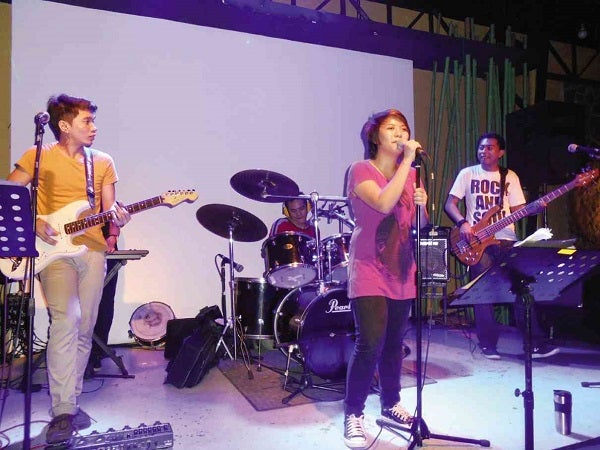 CATHY Go and her band. PHOTO BY POCHOLO CONCEPCION

The most unlikely places for hot and cool gigs

Chic-Boy, the popular roast chicken and pork restaurant chain, is the last place one would expect to feature live music. But for the past few years, its Timog Avenue branch in Quezon City has been enjoying full-house crowds—who not only feast on lechon manok and liempo, but also watch its star performer, Cathy Go.

It’s also at Chic-Boy where Go was said to have been discovered by musician, songwriter and record producer Mike Villegas, who went on to write songs and sit as producer for her debut album, “Finding My Way to You,” which was released last year.

On a Monday night, Chic-Boy is filled with a young audience, a mix of male and female gangmates who order beer by the bucket. The people don’t seem to care if the place is not air-conditioned; the atmosphere gets hotter as Cathy heats up the stage with a full band.

Her full-bodied voice reverberates with life and power, giving justice to her covers of Avril Lavigne (“Wish You Were Here”); Christina Perri (“A Thousand Years”); Katy Perry (“The One That Got Away”); Pink (“Perfect”); and Adele (“Set Fire to the Rain”).

It’s the perfect kind of voice: One that can go low and mine the depths of sadness and desperation, and likewise soar and reach the heights of gladness and ecstasy.

On her second set, Go surprises us with The Police’s “Every Little Thing She Does Is Magic,” a song from a generation much older than hers, but which she renders like she grew up on it.

Another unexpected number, Heart’s “These Dreams,” fuels our thoughts that Cathy must be so serious in her profession that she digs up material from as many sources to widen her repertoire.

But whether she’s interpreting Miley Cyrus, Alicia Keys or Celine Dion, one thing stands out: Go exudes confidence and excellent musicianship, and will most probably go a long way in her career.

The San Mig Light beer, by the way, sells cheap at P45.

On the same Monday night, another restaurant, Off the Grill (also on Timog Avenue, a stone’s throw from Chic-Boy toward the Boy Scouts rotunda), features an unlikely performer: Paolo Santos. We say unlikely because Paolo—the hottest act to emerge from the acoustic pop-rock craze many moons ago—can sound boring to the discriminating music fan.

But it turns out he has been a regular attraction at Off the Grill for the past several years, says drummer Stanley Celudo, who plays here with Santos as a trio, with bassist Joel Guarin. Jimmy Bondoc jams on guitar and vocals. “Walang bayad ’yan, jam lang talaga,” Stanley points out.

If Go’s gig at Chic-Boy is hot in terms of the band’s energy and the music, Santos’ show is cool—relaxing but gets too laid-back at certain moments that it borders on “muzak” or the piped-in sounds one hears in elevators and motels.

But it doesn’t mean his choice of songs sucks, because we appreciate that he covers Bong Gabriel’s “Ang Aking Awitin,” Player’s “Baby Come Back,” Little River Band’s “Cool Change” and Christopher Cross’ “Sailing.”

It’s just that, well, he fails to overcome his shy-type persona onstage and ends up giving lame versions of Stevie Wonder’s “Overjoyed” and James Taylor’s “Your Smiling Face.” (But in the first place, these two songs are boring indeed, having been covered to death in practically every gig with a ’70s and ’80s repertoire.)

And yet the crowd at Off the Grill loves every song it hears—or perhaps some of them actually requested for those tunes. When we look around, the audience—mostly couples on dates and groups of friends on a night-out—appear to be having a good time.

Santos calls out Luke Mejares to jam, and the latter, who is seated with friends in the audience, obliges. His rendition of VST & Co.’s “Ipagpatawad Mo” sounds apt for his soulful style, and that’s when we realize that, for all of VST & Co.’s Bee Gees copycat music, there are actually a few songs (“Ipagpatawad” included) that its lead singer and co-writer Vic Sotto did well.

The San Mig Light at Off the Grill costs slightly higher at P65, but the audio system is much better than Chic-Boy’s.