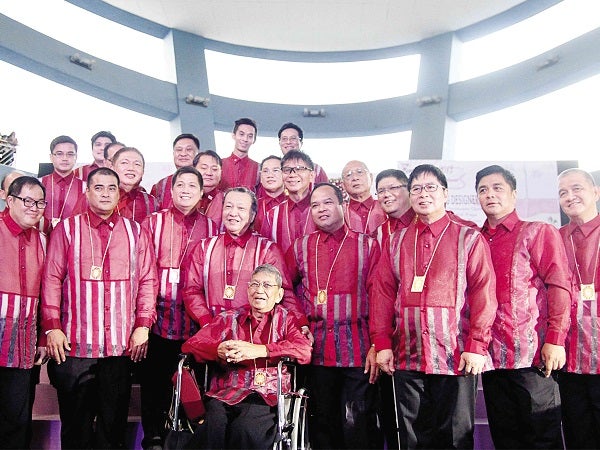 The success of a Flores de Mayo rests on three factors: the sagalas, designers’ gowns and the event coordination.

The Congregacion del Santisimo Nombre de Niño Jesus has never failed to give us all these. On its 34th year, it celebrated the best of Filipino beauty, artistry and culture by giving tribute to the Dean of Filipino Fashion, Ben Farrales.

The association’s main objective is to propagate the devotion to the Holy Child, the Sto. Niño. Its first Flores de Mayo was held at Manila Hotel in 1979. Countless celebrities and beauty titleholders have participated as sagalas to show support for the Congregacion.

The event has also been held in the Malate area and, in the last five years, at SM Mall of Asia with the support of the Pasay City government, SM and Unilever Philippines represented by Chito Macapagal.

Held at SM-MOA on May 5, this year’s sagala featured 30 well-known designers who presented their interpretation of the “Colors of Mindanao,” popularized since the 1960s by Mang Ben through his Muslim-inspired gowns. Intricate beadwork and masterful draping completed the Dean of Philippine Fashion’s signature work.

Although backstage was filled with people—sagalas, escorts, designers, assistants, dancers, makeup and hair stylists—the mood was jovial and organized. Minutes before the program started, I saw Steve de Leon teaching his sagala how to present his gown. There were headdresses being affixed, makeup retouched, Jonti Martinez and Edgar Madamba doing last checks on their sagalas’ gowns, and even more photos being taken.

Hosts Boots Anson Roa and Ryan Tercero opened the program by introducing the current members and officers of the Congregacion, then presenting the sagalas with their escorts. They were a sight to behold; everyone agreed how beautiful all of them were in their gowns.

The sagalas were then led to their arches for the start of the procession. The Gintong Lahi Dance Company also entertained the audience with their expertly choreographed Muslim numbers. As the sagalas and escorts returned from the procession, they were introduced one by one to Mang Ben. Seeing this, I couldn’t help but think of how fortunate this batch of sagalas and escorts was to have this special time with Mang Ben.

The final part of the program was the announcement of awardees for the titles, such as the Gandang Filipina or Ms Cream Silk Award, La Flor de Manila, La Flor de Pasay, Rosa Mistica and Reina de las Flores.

Kudos to director Ogee Atos, coordinator-photographer Bong Regala and the Congregacion committee for giving the audience the grandest and most beautiful Flores de Mayo anyone has ever witnessed.

It’s exciting to imagine how next year’s parade would turn out. The Ben Farrales vision of fusing Filipina beauty with fashion, while giving honor to the Sto. Niño, made this event truly worth watching.