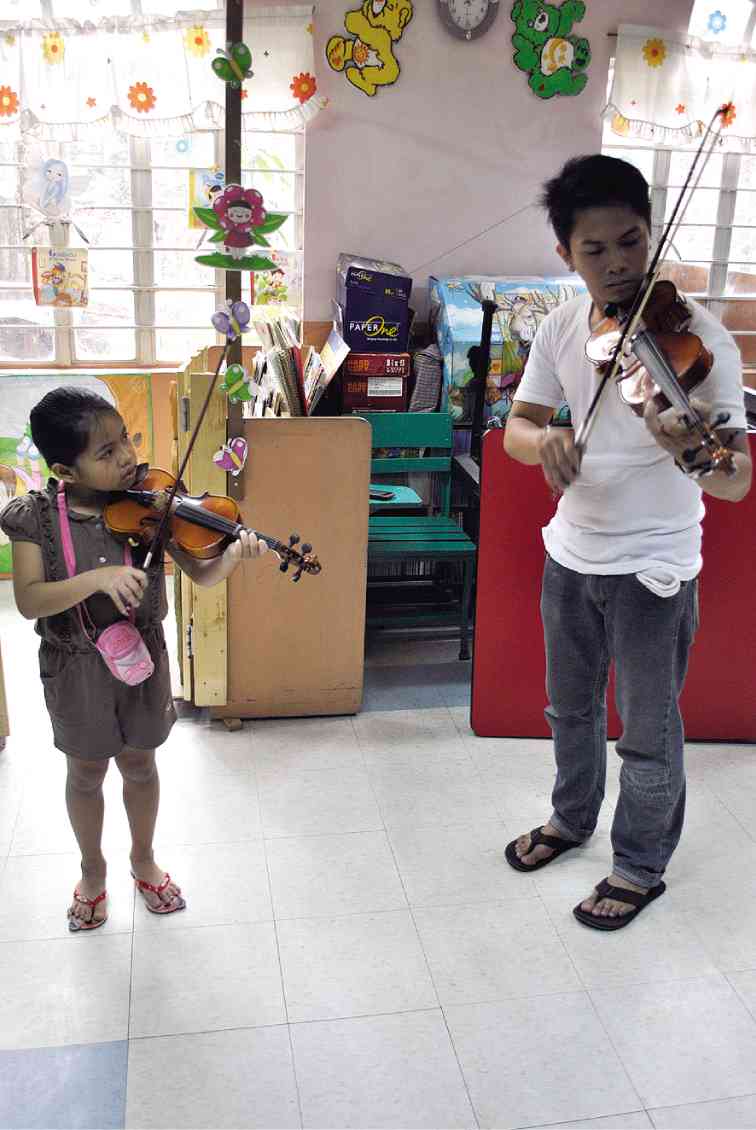 Learning to play the violin a dream come true for dad

As a young boy, Rochelito Pascual would sit beside his grandmother as she blew dust off a weather-beaten violin’s body.

While she cleaned the violin, Pascual would listen wide-eyed to tales about the violin’s owner, a kundiman-playing grandfather who died before Pascual was born.

The stories fueled Pascual’s desire to take violin lessons, something his family could not afford. “Kahit noong nag-asawa na ako, tinitingnan ko ’yong presyo ng lessons at mahal talaga siya (Even after I got married, I’d be looking at how much lessons cost and they’re really expensive),” said Pascual, who now resides in Tondo, Manila.

In 2011, Pascual’s daughter, Thea-Kish, qualified for the After Hours Music Program of the Center for Excellence in Public Elementary Education (Centex) Manila.

Centex is a project of the Department of Education and Ayala Foundation Inc. (AFI).

“Children often do not have the words to share their feelings. This is where music comes in—it gives children a non-verbal means of expression,” explained Bolipata, whose passion for music and helping children has extended to film as well. In “Boses,” a film set for commercial release in July 31 via SM cinemas nationwide, Bolipata plays a reclusive violinist who experiences a change of heart after he discovers that Onyok, a young boy muted by abuse, has an artistic gift.

Unbeknownst to him, another gift was coming his way. The program was also in need of parent volunteers to help the children prepare for their weekly lessons. Bolipata’s group, seeing Pascual’s interest, decided to teach him to play as well. Today, Pascual is learning the violin alongside his 7-year-old daughter.

Last March, Pascual joined his daughter at the program’s recital, not minding that the pieces he performed were the same as those of the young students. “Ok lang, kahit matanda pa ako sa ibang teacher! Ito ang inaasam ko (I’m even older than some of the teachers but it’s OK. This is what I’ve longed for),” he said.

Presented by Starbucks Philippines, the free concert was timed with the observance of Earth Day. Julian Duque, who plays Onyok in “Boses,” joined the Pundaquit Virtuosi in an excerpt of Vivaldi’s “Four Seasons.”

The audience heaped praises on Duque’s performance of the concerto’s Spring movement. Other program highlights included renditions of “Secret” by One Republic; “Happy Together” by The Turtles; a shadow play on Lucio San Pedro’s “Sa Ugoy ng Duyan”; and two short films on children and the environment produced by select students from Zambales and Tondo.

“Parents’ involvement play a big role in arts programs programs. Without their encouragement, their kids will not succeed. I really don’t find it hard to teach these children because aside from the students’ hard work, we have parents egging them on,” enthused Bolipata.