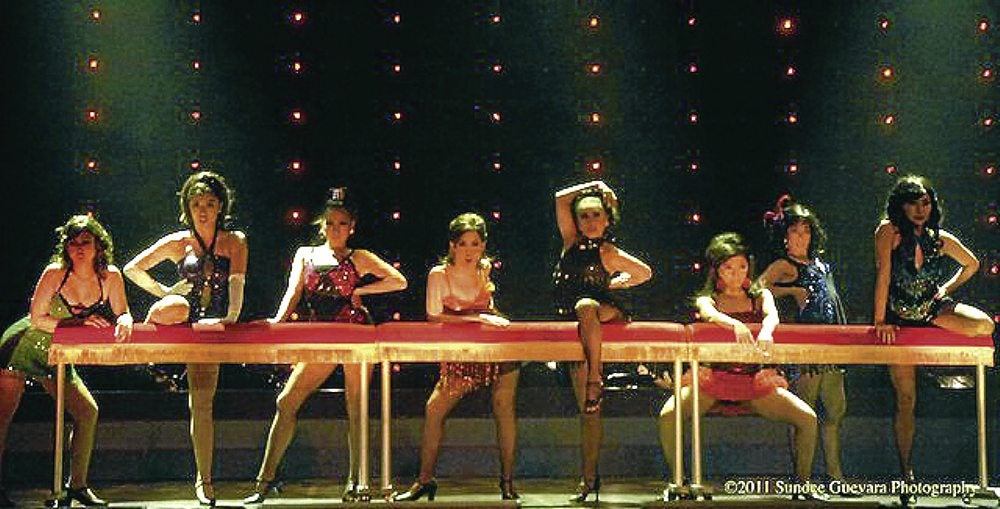 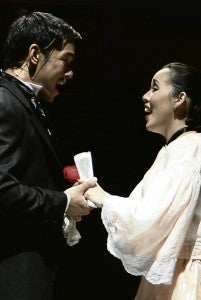 Paul Morales’ 2005 production featured one forlorn piano as live accompaniment, uniformly unmiked voices, a gargantuan set that cramped everything else on stage, and listless direction which rendered Rizal’s convoluted tale more ponderous than ever.

“As a musical,” we wrote, “[this] ‘Noli’ is, finally, an aural failure, unable to wrap the theater in the aching sweetness of Cayabyab’s music or the sonorousness of Lumbera’s language.”

Only six years later, Audie’s Gemora’s restaging of the musical, ongoing until Aug. 28 at CCP’s Little Theater, goes a long way toward restoring much-needed luster and lucidity to this essential work. “The simpler, the better” seems to be Gemora’s mantra. As in his production of “Equus” for Repertory Philippines last year, this “Noli” stands as a model of narrative and emotional clarity—devoid of high-concept flourishes, but able to find its musical and psychological acuity in the crisp, crystalline retelling of the sad fate of Crisostomo Ibarra.

No longer does “Noli” feel like an episodic cavalcade of the book’s highlights. New additional text by Rody Vera helps to weave the material into a tighter, more logic-driven whole.

The juxtapositions are mostly canny. Padre Salvi’s discovery of Damaso’s incriminating letters, for instance (a newly written scene), is placed in counterpoint to the river-picnic episode at which Ibarra and Elias vanquish a crocodile. As the ensemble upstage shrieks, “May buwaya!” Salvi (Al Gatmaitan, forceful), thunderstruck on a downstage corner at Damaso’s revealed lechery, mutters, “Anak ka ng buwaya!”

Similarly, late in the play, by simply repeating the ensemble movement earlier associated with the town leper on the now-outcast Ibarra, a sense of elegant foreshadowing and symmetry is realized between the two figures. And when Don Tiburcio and Doña Victorina (Garry Lim and Ring Antonio), after their scenery-chewing song-and-dance, strike a pose before a vintage camera, the throwaway image becomes a witty dig at celebrity culture, circa 1800s.

Damaso’s secret letters now travel through the narrative as an astute unifying device, carrying with them the story’s undercurrents of intrigue, betrayal, seduction, thwarted love and skullduggery. Mio Infante’s multi-stepped platform of a set entombed in what looks like a giant warehouse or a dungeon amplifies the sense of entrapment and oppression (the costumes are by National Artist Salvador Bernal). 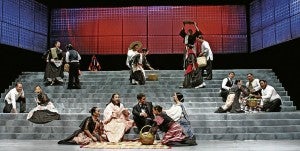 In this stark landscape, and with Gemora’s apparently meticulous work on his actors’ characterizations, Rizal’s enduring characters (excepting the reliably caricatured De de Espadaña couple, the Thenardiers of their time) feel simultaneously archetypal and specific, familiar yet fresh.

The two Ibarras make for striking opposites. Gian Magdangal is tall, mestizo, cosmopolitan, with a sweet, high tenor that rides Cayabyab’s torrential, occasionally dawdling music with beguiling ease. His alternate, the pop singer Mark Bautista in his musical-theater debut, has a darker, thicker voice that takes on a strained, scuffed quality in the high notes, though its mid-register sounds burnished.

Magdangal’s is the nuanced turn, but Bautista seems uncannily right for the part—compact, dusky, intense, in a manner that hints more easily at his character’s eventual transformation into the vengeful Simoun in “El Filibusterismo.”

They both find a comely object of affection in Cris Villonco’s splendidly sung Maria Clara. The immaculate tones of Villonco’s ingenue days have given way to a more tensile sound, transforming her character from the frail, simpering damsel of popular imagination into a young woman of intelligence and bright promise.

Her capitulation, thus, to Padre Salvi’s trickery attains a heightened sense of true tragedy—a moment topped only by her and Ibarra’s parting near the end, when this “Noli’s” purity of narrative has so roped you in that the “Pamamaalam” scene rises to a particularly ravishing peak of emotion and musicality.

That effect, we surmise, would have been even more pronounced had “Noli” opted for live orchestration. The recorded music sounds flat in places, though the ensemble’s clarion singing, as well as those by individual players such as Angeli Bayani (Sisa) and Red Nuestro (Kapitan Tiago), help mask that deficiency.

Tanghalang Pilipino is clearly working within constrained means. Props to it then, and to Gemora, for a production that, overall, feels anything but.

This version takes after the 2005 Broadway staging with Christina Applegate as the childlike dance-hall hostess Charity Hope Valentine—itself an updating of the original 1966 production directed and choreographed by the legendary Bob Fosse, with book by Neil Simon, music by Cy Coleman, lyrics by Dorothy Field, and starring Fosse’s incomparable muse, Gwen Verdon.

It’s important to remember that provenance, if only to understand how “Sweet Charity” has arrived to us in its more or less gentrified state. The source material, Federico Fellini’s 1957 film “Nights of Cabiria,” had Giulietta Massina playing a plucky, eternally optimistic streetwalker in Rome.

That gritty character became a less threatening dancer-for-hire in 1960s New York in Fosse’s “Sweet Charity”—though, by keeping Verdon sheathed in a slinky black dress, Fosse retained the sexual edge of the material. (“I want her in a plain black dress, and she’ll wear it the entire time,” was Fosse’s instruction to costume designer Irene Sharaff.) 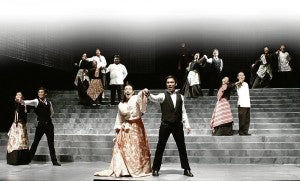 When the musical was made into a film in 1969, also directed by Fosse, Edith Head kept the iconic black dress for star Shirley MacLaine. The template was being sported as late as 1986, in a Broadway revival with Debbie Allen, where the actress graced posters and billboards in the same dress and pose—arched back, flexed foot—Verdon had made famous two decades ago.

In the 2005 restaging, however, the black dress was banished. Applegate came out in a fire-engine red slip. And for the local iteration, the look has become downright tame—magenta and red, but in dainty empire-cut frocks (costumes and psychedelic-pop scenography also by “Noli’s” Infante) which make Gil’s character more girl-next-door sweetheart than the eight-year veteran of the Fandango Ballroom she’s supposed to be.

And yet, irrespective of the pallid dress, Gil is amazing. Make that three-fourths amazing. She is a dancing-singing-acting dynamo, her joy at performing onstage incandescent with every twirl, kick, shake and shimmy.

She tends, however, to oversell her lines and mug through the proceedings, scrunching her lovely face for comic effect. She needn’t work so hard; Simon’s book, while dated, can still summon chuckles, and the show itself barrels through on the steam heat of its rousing dancing and musical sequences.

It’s telling that when Gil launches into song and begins hoofing her way, her cutesy exertions vanish, replaced by a poignant sensitivity that appears to make her character grow in stature (in “Where Am I Going?” for instance).

She’s not helped by being set so visually apart from the rest of her bawdily garbed sisters-in-trade (the excellent Shiela Valderrama-Martinez as Charity’s best friend Nickie pacing them all). When Gil sings, “There’s gotta be some life cleaner than this!” the disconnect between what she says and how she looks can’t be any clearer.

This aberration aside, the rest of the production is an engaging blast. Guevara orchestrates a glossy, admirably hardworking show, beginning with a peppy brass orchestra (conducted by Joseph Tolentino) that sets the evening on a toe-tapping mood right from the overture.

And the ensemble dancing Fosse? Well, they try. None of them, Gil included, has the Fosse silhouette or style—those angled, undulating limbs; the sly, sibilant, insinuating evocation of the burlesque—but in the all-dancing set pieces such as “Rich Man’s Frug” and “I’m a Brass Brand,” the company tears through its routine with uninhibited energy and conviction.

Lawrence, in his first musical-theater foray (this is Gil’s second, after “Legally Blonde” with Atlantis Productions last year), acquits himself with a charming turn as Charity’s nebbish love interest Oscar Lindquist. And OJ Mariano’s vocal dexterity lights up two disparate numbers, the pseudo-operatic “Too Many Tomorrows” and the soul-inflected “The Rhythm of Life.”

But, mostly, it’s Gil’s show, and she steps—nay, leaps—up to it. At one point, Charity sings, “I’m the bravest individual I have ever met!” Ditto, it seems, for the actress playing her—and the young theater company that’s here putting on the darndest good show it can. Do spend a little time with this “Sweet Charity.”