A river of paint runs through it | Inquirer Lifestyle 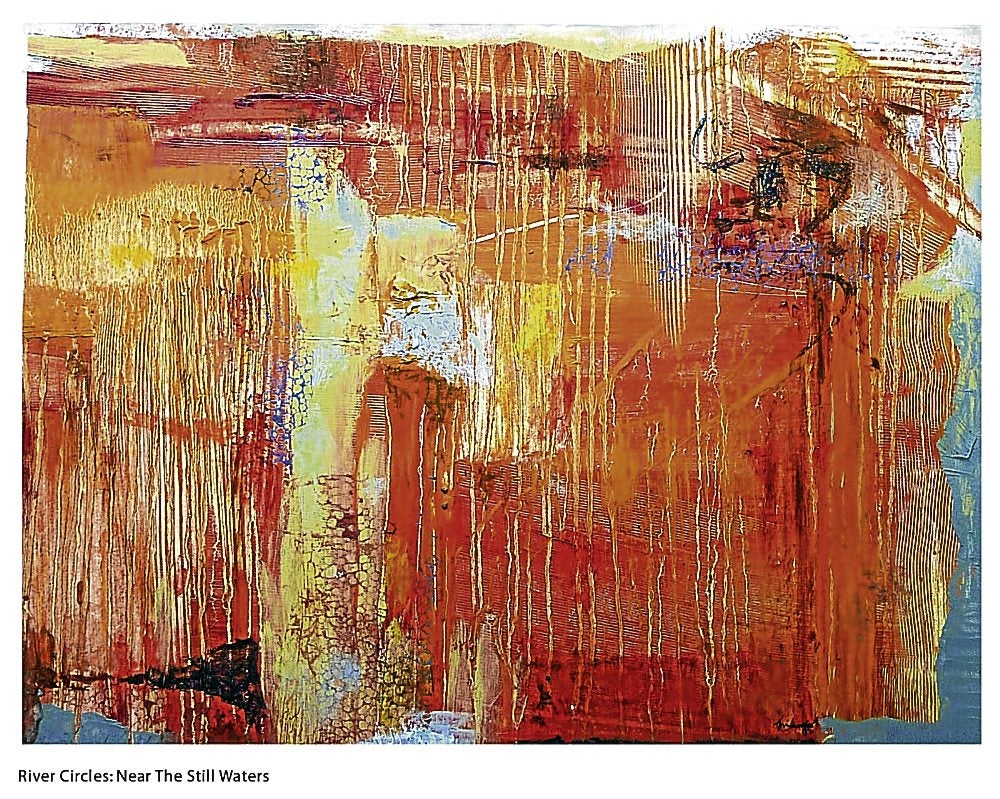 A river of paint runs through it

“The main difference, then, between abstract and non-abstract art, is that the abstract artist does not have to choose a subject. But whether or not he chooses, he always ends up with one.” Thus declared Elaine de Kooning, artist, critic and wife of the great Abstract Expressionist. With the exception of the “Woman” paintings, the greater body of Willem de Kooning’s works were allusions to landscapes, in particular the Hampton, a beach resort on the southeastern end of New York’s Long Island. If not allusions to a physical landscape, then to spiritual states.

Landscape-based, too, were many of the works of the late National Artist José Joya, the pioneering exponent of a Philippine brand of Abstract Expressionism, who introduced the artistic idiom to the country in the late ’50s. During his term as dean of the UP College of Fine Arts in the ’50s, Joya inspired one of his students to take up the brush and turn to Abstract Expressionism as the visual language of choice. From this conviction of principle, Edwin Wilwayco has, for the past three decades, wrought some of the most adventurous abstract experimentations on paper and canvas.

Pursuing a natural subject, Wilwayco found expressiveness in the tropical exuberance of the Bird of Paradise. They were a logical takeoff point for Wilwayco’s enchantment with the forces of nature, predicated on at least three elements: earth (mountains), air (wind) and, now, water (rivers).

Not surprising that poets were the first to extol the majesty and mystery of the river. And, literally, singing the praises of the river were the musicians. Surely we have all been emotionally swept by Nicanor Abelardo’s “Mutya ng Pasig.” Other great rivers like the Thames, the Seine, the Ganges, the Tiber, the Mekong, and the Hudson River have all been the subject of musical obeisance. On canvas, these rivers have flowed in streams of oils and acrylics. Of course, not only rivers but other bodies of water, such as ponds, lagoons, brooks, even gorges and waterfalls, meander and cascade, from the artist’s eloquent brushstrokes. The ancient Chinese painters fittingly regarded water as the blood of their art.

The river, too, has impacted on Wilwayco, whose expressively nuanced “River Circles” works are the liquid reflections and articulations of his dynamic and restless brushstrokes. The artist stretches the emotional potential of Abstract Expressionism. Now even more adventurous in his choice of colors, Wilwayco careens through the octaves of the color register: reds, oranges, brown, blues, greens and purples, till they achieve optical brilliance. Not shimmering surface, but a light-bleached atmosphere enhances Wilwayco’s recent works, with his eyes fixed on the animating movement of flow and eddy of the river.

Wilwayco’s appetite for the discovery and invention of shapes has always been indefatigable, if not unquenchable. He has been resourceful in the manipulation of paint as matter, often incorporating sundry texture-rich material such as sand, sackcloth and abaca fiber. What thrills him, and, therefore, the viewer, is the execution of paintings with a disciplined improvisation, even as, increasingly, the painting heaves with layer upon layer of impacted oil pigments. Always it is the theme of the series that impels Wilwayco to deliver the emotional resonance. In “River Circles,” drips, dribbles and smears appear in multiple layers that are inextricable from each other. These works look positively subterranean. Wilwayco wields the brush as though it had been handed over to him by the late José Joya. In these new works, a river of paint runs through the watery channels of his creation.