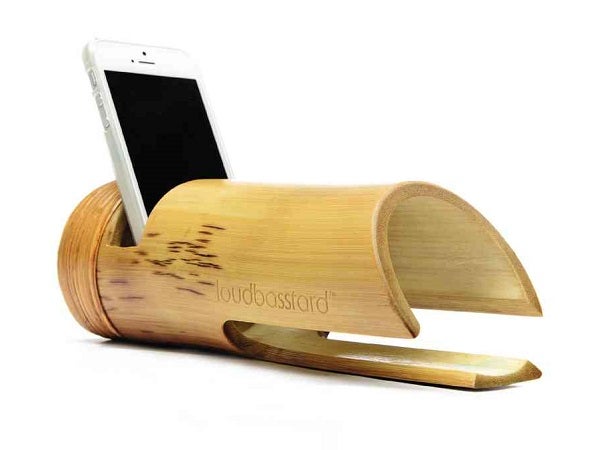 YOUR BEATS get amplified sans electricity.

Loudbasstard co-creator Koh Onozawa says the idea to make a different kind of sound amplifier came while he was in the mountains.

“Franz (Ignacio) and I were in the mountains with my girlfriend Julie to do a think tank for a furniture line. During that session, Julie played a song on her phone and placed it in a glass to amplify the music,” recalls Onozawa.

“While the idea of passive amplification isn’t our invention, it was what shifted the focus of the think tank from furniture design to creating products that merge modern technology and industrial design while utilizing the abundant resources in the Philippines,” he adds.

The family of Ignacio—who studied art at New York’s Pratt Institute—has been manufacturing and exporting furniture, while Onozawa hails from a family of architects and product designers. Introduced to each other by their Cebuano moms, Ignacio and Onozawa have become creative entrepreneurs after leaving their 9-to-5 jobs in the US and Japan, respectively.

Together with partner Juli-Anna McGovern, they came up with Loudbasstard—a handmade audio speaker dock made from bamboo and rattan. The speaker uses passive amplification, which allows sound from the music source to be amplified without the aid of electricity or batteries.

Onozawa says his team wanted to incorporate a social aspect and Cebuano community empowerment to its product, hence the use of bamboo: “We knew we wanted wood for its sound-conducting quality, but we also wanted to focus on sustainable materials in all our designs, as well as something handcrafted to reflect Cebuano culture.”

Indeed, bamboo is a fitting material to suit Loudbasstard’s vision. It has been used as the foundation for many livelihoods in Cebu, from agriculture to furniture. Even the popular folk dance tinikling derives its beat and rhythm from bamboo poles knocking against each other.

Research and development took about six months, while another three months were spent on finalizing how Loudbasstard would look. Its cheeky name came easily though. “We were on our way down from the mountains when I jokingly mentioned, ‘This thing is going to be one loud bastard.’ We found it so catchy that it stuck. The extra ‘s’ made it music-related,” explains Onozawa.

The speaker is not only functional, but proof positive of Filipino craftsmanship. According to Onozawa, each piece undergoes months of curing and drying before it takes its form. Each speaker dock is cut, sanded and dyed by hand. The wood of the bamboo conducts the sound, while the shape helps channel it. 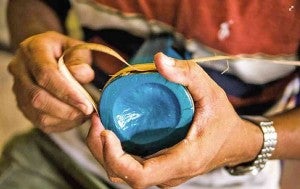 Loudbasstard has been making noise both here and abroad. It was recently featured in design magazine Wallpaper* and was given away by furniture designer Kenneth Cobonpue as gifts at the Diffa Dine in Design and Voce Di events he attended in New York.

At the recently concluded Platform Showcase Pop-Up Store at M Café in Ayala Museum, the Loudbasstard team invited artists to embellish the speaker docks, an initiative the team plans to continue.

The speaker docks are the perfect accessory to have, especially now when most city-dwellers are heading to the beach. Since Loudbasstard does not use batteries or electricity, it’s also perfect for bathroom use since it can withstand the elements without compromising its ability to amplify (but keep your device protected from water).

It’s also a green alternative to traditional portable speakers. “Our goal is to design products that cater to an environmentally conscious lifestyle,” says Onozawa.

Glorious things are in store for Loudbasstard. “It has actually gone beyond just making one product; it has now evolved as our brand. We are looking into making future products out of other resources, making the coming months very exciting,” reveals Onozawa.