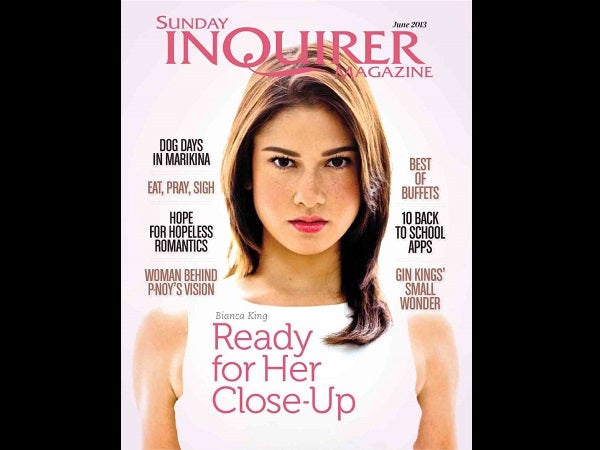 Bianca King: Ready for Her Close-up

Bianca King is a drama queen, and we mean that in the best possible way.

Just as cream rises to the top, the 28-year-old actress has emerged as one of local television’s prime dramatic leads, after nearly a decade in the telenovela trenches.

Only 19 and still in film school when she first started acting in network soaps, King has accomplished the singular feat—highly unusual in the often rigidly formulaic world of local soap operas—of avoiding being typecast as the stereotypical evil rich mestiza bitch who maltreats the heroine while making a grab for her man.

Her breakthrough came just two years ago when she was cast against type as the lead in GMA’s “Sinner or Saint.” Her performance as a long-suffering female convict got good reviews, and won audiences over despite her being known as a contravida (villain).

The network execs must have taken notice: She’s had her pick of juicy leading roles since then, in “Broken Vow” and “Luna Blanca.”

Set in the world of overseas contract workers, King plays the rich heiress of a labor export company who falls for a poor but handsome seaman (played by hunk du jour Dion Ignacio).

“It’s nice to (be) in such a simple but beautifully written story,” she says. “My character is smart, strong-willed, and comes from a rich family but is kind-hearted and compassionate. Normally in the soaps, the poor girl is the underdog. Now it’s different. It’s still the classic rich girl-poor boy story, but ang babae naman ang tumutulong sa lalaki (it’s the girl helping the guy this time).”

Shooting a telenovela is the equivalent of shooting several movies back to back. Having been in over a dozen of them makes King a seasoned veteran despite her youth.

“I think the longevity of my career as a young actress is quite healthy,” she says. “I’d like to think that now I look ageless, timeless. No one can say how old I am so I can play someone who’s 18 or someone who’s 30.”

Her aquiline Eurasian features have also proved versatile: Her look can be tweaked to fit a wide range of characters, from scheming seductress to long-suffering Madonna, and all shades of good and evil in between.

“Even if I’ve been in the industry for a while, I consider myself pretty new when it comes to playing lead roles,” she says. “I’ve only been doing it for two years, so the role is still fresh. What’s real to me is, I’m working hard to keep my spot, and to keep climbing up.”

The path from contravida to leading lady hasn’t been without its struggles.

“It still comes back to haunt me now and then,” she admits.

“I don’t know how true it is for other actors, but because I was doing contravida roles for seven years-not all, but 80 percent at least-it became a stigma off cam. It was just a knee-jerk reaction: Kung ganoon siya sa TV baka ganoon din siya sa totoong buhay  (she must be like that in real life). It’s been a struggle for me, and I think I haven’t completely shed that image, that’s why even if I want to play diverse roles, play character roles and do edgy things, I have to stick to one path now if I want to achieve my goal, which is a certain stature and respect in showbiz.

“Since I started doing lead roles, the roles that have come to me are sobrang challenging,” she continues. “The stories are also very edgy. In ‘Sinner or Saint,’ I played a woman convict na no read, no write, so it was a total transformation. Sa ‘Broken Vow’ naman rape victim ako and I aged almost 10 years during the story. In ’Luna Blanca’ I was painted black from head to foot.”

In contrast to the often gruelling work schedules that the typical telenovela demands, shooting “Sosy Problems,” a light comedy/chick flick with Solenn Heussaff, Heart Evangelista and Rhian Ramos was like taking a vacation.

King says she wouldn’t mind doing more comedies if they come, but for now her focus is on dramatic roles.

Acting chops aside, King is also a get-stuff-done, take-care-of-business kind of person, with a fierce work ethic and ambition to spare, which helps get her through those long shooting days.

“I’m young, I have a lot of drive and a lot of passion for anything that I do,” she admits.

“If you ask my friends or anyone who’s worked with me, they’ll all say that I’m super intense. I like to take the initiative and give 110 percent to everything. I get teased sometimes that I’m a ‘type A’ personality. I’m a straight-shooting type of girl. I know that a ‘type A’ personality has negative connotations, like being controlling. Hindi naman ako ganoon. (That’s not me). But I believe I have the good ’type A’ traits that likes serious work and likes to set goals and tries to achieve them in the best way possible.”

An only child, Bianca’s father is Canadian. Born in Germany, she grew up in the Philippines.

Her parents ran a successful audiovisual production company, until the advent of do-it-yourself computer graphics rendered the business model obsolete. They have since moved back to Canada.

“I travelled with them when they would stage productions abroad,” she recalls. “I guess that’s where I got my independence and forward-thinking. I’m very conservative Filipina in my values but my forward-thinking I got from travelling with my parents.”

It might also have sown the seeds of her passion for self-expression.

“At first I wanted to be a writer,” she recalls. “I was the president of the drama club when I was in Grade 6 in San Beda Alabang, and I wrote my first play when I was 12. I was super engrossed in the arts: singing, dancing, playing instruments.”

She was only 10 when she started modeling for commercials.

“I thought it was the kind of industry that I could be interested in,” she recalls –which is why she chose to study digital filmmaking at the College of Saint Benilde.

“Number One, I think I can make money from it, which is the most important consideration in choosing a course-how are you going to earn a living from your education? Number Two, it is accessible to me and easy to balance with my work as an actress. And of course it goes hand in hand: Yung mga natututunan ko bilang artista nagagamit ko sa school, at yung natututunan ko sa school nagagamit ko bilang artista (I can use what I learned from acting in school, and vice versa). It was convenient for me. And Number Three, I had a burning passion inside. I still do. For me, you can never get sick of film; there’s so much to express and to learn, it’s such a diverse and interesting industry that it’s never going to get old.”

For King, working in front of the camera is a stepping stone to eventually working behind it, as a director.

“I’ve been financially independent since I was 17,” she says. “My career is something that I’ve definitely worked hard for. I’m not the biggest star, and I don’t aspire to be the biggest star. I want to express myself through acting and make money so I can take time off and learn how to direct. That’s my one-year goal right now. Pag marami na akong naipon (When I’ve saved a lot), I can take six months or one year off from acting so I can focus on directing.

“It’s going to take a while,” she adds. “In any career, there’s a climb. I’m willing to put in the legwork, but for me to be able to do that, I have to save, save, save from showbiz.”

King has already put Phase 1 of her game plan into action. While on hiatus from the soaps, she apprenticed under director Erik Matti for Dondon Monteverde’s Revolver Studios, a TV commercial production company. For several months she was immersed in all aspects of production. She had to put that on hold when production of “Maghihintay Pa Rin” began, but she plans to return when shooting schedules relax a bit. Meanwhile, she’s come to terms with the demands of being a celebrity in local showbiz, which includes being in the news.

“I’m really not one to talk about my personal life,” she says. “Normally we’re asked about our love life. I’m super open when it comes to talking about how I grew up, my family, so people following my career would know. But when it comes to my love life, I’ve been known to skirt questions. I always say that I’d rather not capitalize on my personal life when I’m supposed to be talking about a show I’m promoting. I try to find ways though to be open about who I’m seeing, who I like, who I have a crush on, but details that should be kept private I make it a point to keep them private.

“I’m in this business to play somebody else,” she says. “I’m not a reality star, I’m not selling my real life to an audience, but I do try to share what I can.