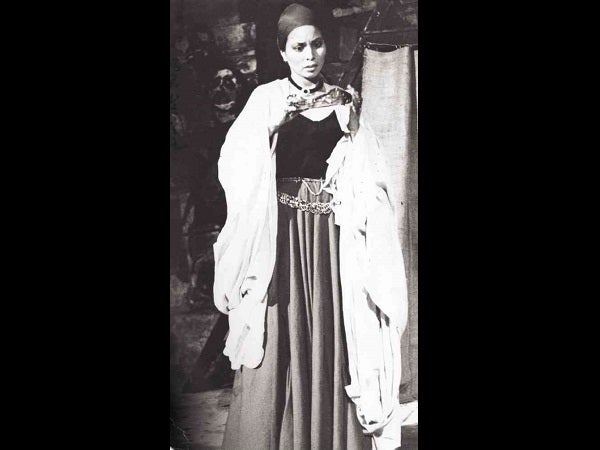 That was a long time ago, and for some reason the phrase has stuck in my mind. Later Bulaong got married, became a mother and reinvented herself as CB Garrucho—which has since become her professional name.

The former Miss Bulaong was born in Malolos, Bulacan, in 19-forgotten. She attended high school and college at the Assumption College, where she discovered the theater.

“I was extremely shy as a child and wasn’t brave enough to recite in front of the class,” she recalled. “Then at Assumption High School we took up one Shakespeare play per year starting with ‘Julius Ceasar,’ progressing to ‘Hamlet’ and ‘Macbeth.’ With great fear I had to stand and perform the soliloquies in front of the class year after year.”

She discovered a “trick” that worked for her: She would try to understand what the character was saying in Shakespeare’s “strange language” and to memorize it months in advance. To her great surprise, at the end of high school, she was given the Best Orator award.

Thus began her interest in, and passion for, the theater.

As M.L. Maniquis wrote in the CCP (Cultural Center of the Philippines) Encyclopedia for the Arts: “Bent on joining Peta (Philippine Educational Theater Association), she auditioned against her parents’ wishes and won a part in Miller’s ‘The Crucible’ as Mercy Lewis, and later in Ionesco’s ‘The Chairs.’”

That was when I first saw Garrucho. “The Chairs” was one of those experimental Ionesco plays which perplexed everybody. There were only two actors in the play, if memory serves right. The acting was intense. At the end, the players made their exit abruptly, and did not return for the curtain call.

As the mystified audience filed out of the small enclosure at the Raha Sulayman Theater in Intramuros, Manila, lo and behold, they saw the two actors calmly seated on the steps. And Garrucho was saying, “Yes, the play is over, that’s how the play ends, you draw your own conclusions, etc.”

The venerable Peta was only a few years old then, like the equally iconic Repertory Philippines.

“What was life-changing for me was watching my first play in Filipino, ‘Bayaning Huwad,’ directed by Cecile Guidote, starring Vic Silayan, Lolita Rodriguez, Lily Mendoza and a cast of hundreds,” Garrucho recounted. “It was a beautiful experience forever etched in my mind, and it drew me like a magnet to Peta. Even in those days I discovered the power of theater and how it can be a life-changing force.” 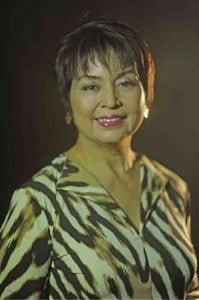 “Radiya Mangandiri,” according to Garrucho’s estimation, “was a landmark play, Peta’s version of the ‘Ramayana.’ It plunged the cast into research on Philippine culture.”

“Working with directors in Peta plays was a joyful experience because actors co-created the play together with the directors,” she observed. “There was a give and take, we weren’t simply blocked and directed.”

The veteran thespian concluded that “theater—unlike painting which can be done by a solo artist—is an art form that needs a whole team of people to execute. As a theater artist I learned how to work with others, respecting others’ talents while excelling in one’s own craft.”

That was a carrot, now here’s the stick: “There are times in theater when individual egos can get in the way of an otherwise smooth, excellent production.”

When she first joined Peta, Garrucho’s ambition was to be a great actress on the Philippine stage, like Lolita Rodriguez. But somewhere along the way, a Joycean epiphany manifested itself and she became aware that theater can have many other achievements in this country.

Thus, “theater can bring out the hidden potential not just in children but in adults. Theater can be used to turn classroom learning from boring to exhilarating. Theater can teach people to be creative and resourceful in the face of lack of resources. Theater can help shape the consciousness of a people and make us proud of who and what we are.”

And so, as she put it, her immersion in theater has taught her to work for a goal larger than herself. Brava.