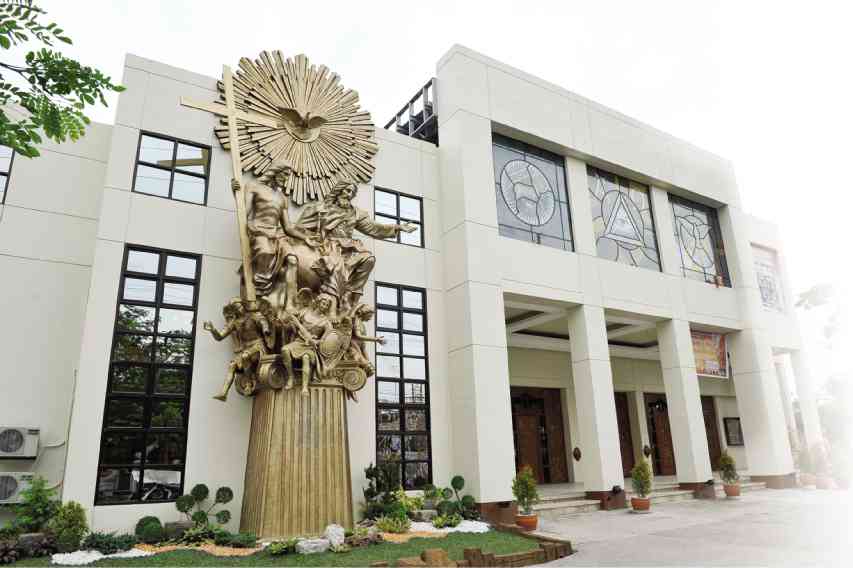 Installment of the dedication marker

In Malolos, Bulacan, bowling alley metamorphoses into a church

The Diocese Malolos has a new parish church right in the capital of Bulacan, near the border of Plaridel. It has been canonically dedicated to the Santisima Trinidad (Holy Trinity) by Malolos Bishop José Oliveros.

The new church occupies a lot where a bowling alley used to stand.

“This structure where we now have our church, as we know, had been a bowling alley. But it no longer looks as one,” said Bishop Oliveros during the consecration of the church June 15.

“It has ceased to be a place for leisure to become a place of sacred communion,” he added. “This is because of the collaborative effort of the community and devotees of the Holy Trinity from other towns.”

The consecration was highlighted by the blessing of the pillars, walls, and altar with holy water and oil. It was celebrated in the presence of devotees, the clergy of Malolos, and Bishops Cirilo Almario and Deogracias Iñiguez.

Indeed, Santisima Trinidad has no semblance of the bowling alley it had once been. Although the old framework, including the foundations, have been retained, the structure now carries a fresh look, not typical of older churches in provinces.

Carved on the doors are stories from the Bible rendered by master wood-carver Antonio Magtoto. The panels are dedicated to each Persona—of the Santisima Trinidad and to Mary. The last door, the Jubilee door, tells the story of the Holy Trinity devotees of the province.

As background of the altar is a painting by artist Aris Bagtas, who has also worked on other religious art in other churches, such as in the National Shrine of Our Lady of Fatima in Valenzuela City.

Even the baptismal font of marble has been exquisitely designed with pillars surrounding it to represent the other sacraments of the Church.

Carrillon bells are also set to be installed in front of the structure.

Devotion to the Holy Trinity in a small barrio, lying near the borders of Malolos and Plaridel, started in 1901 when a local farmer found an icon of Santisima Trinidad on the land he was tilling.

Considering his find a spiritual experience, the farmer, together with the townsfolk, built a nipa hut, which served as a chapel. Here they placed the image on an altar.

In 1935, water flowed at the side of the altar. People believed this water could heal illnesses. Because of this, devotion to the Santisima Trinidad of Malolos grew stronger.

Despite the larger flocks of devotees going to Santisima Trinidad, the place of worship for the Holy Ghost icon remained a chapel until the turn of the millennium.

In 2000, under Fr. Ventura Galman, the holding of the sacraments of the Church began to be administered in a nearby resort, owned by Martin and Aurea Valerio, which is still close to the smaller chapel. This is the present site of the Santisima Trinidad Parish, the former bowling alley.

Nowadays, healing Masses are held at the Santisima Trinidad every Friday.