Into the deep end with Neil Gaiman’s magical ‘Ocean’ 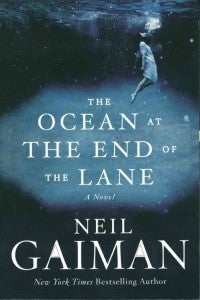 Supernatural subterfuge is a powerful theme in the novels of Neil Gaiman. There’s always something masquerading as something else: a god pretending to be an ordinary man (“American Gods”) or a star in the form of a girl (“Stardust”).

At the beginning of “Ocean,” an unnamed middle-aged man returns to the place he spent his difficult early years in Sussex, England, to attend a funeral. “Childhood memories are sometimes covered and obscured beneath the things that come later, like childhood toys forgotten at the bottom of a crammed adult closet, but they are never lost for good,” he thinks.

He walks around and soon finds himself in the neighboring farm, where he recalls an unusual childhood friend named Lettie Hempstock, and the pond in their backyard, a body of water Lettie had always insisted was actually an ocean despite its size. “I remembered that, and, remembering that, I remembered everything.”

Here Gaiman starts to play a trick of narrative sleight-of-hand with the reader, as the narrator begins to reconstruct the events of his early days, in particular, how his simple life began to change after an unfortunate lodger killed himself using the narrator’s family car.

At this point, strange dreams haunt the protagonist and strange things start to happen, leaving the reader to wonder if he’s just seeing things or if these mysterious happening are real. Is the young boy merely making up stories, or is a monster actually living in their midst?

It soon becomes clear that something dangerous is happening. The key to understanding what is happening and preventing any further damage lies with Lettie, who, in the process of aiding the narrator, hints at a world beyond our own.

“I wish you’d explain properly. You talk in mysteries all the time,” the boy says.

Once Gaiman releases this little expository genie from its bottle, “Ocean” transforms fully into a frightening confrontation between the forces of light and dark as he pulls back the curtain of perception just enough to let the reader catch a glimpse of an eternal struggle.

It is left to the narrator—and the reader—to make sense of all that has been witnessed. Gaiman does remind us of one thing: “Adults follow paths. Children explore.”

This dichotomy lies at the heart of “Ocean,” which is remarkably short for a Gaiman novel. It began, after all, as a short story that gained a life of its own.

Though “Ocean” has been labeled a novel for adults, there are many strong young-adult and children’s elements at work in the book, recalling at times the feel of the 2008 Newbery Medal-winning “The Graveyard Book.” Though the narrator is an adult, much of “Ocean” takes place during his childhood, so the book conjures the wide-eyed panorama of those years, though it emphasizes the “believe” part of “make-believe.”

Gaiman clearly culls from his own experiences, and the narrator, though fragile, feels so authentic. The novel’s star, however, is the kooky and faithful Lettie, a companion any reader will want to have at their side.

What readers can always count on is Gaiman’s elegant prose, drawing the reader into the thick of what is essentially a nightmare, but in the company of powerful friends. “I do not miss childhood, but I miss the way I took pleasure in small things, even as greater things crumbled.”

It is a very good time to be Gaiman with his dazzling talent for diversity, as he’s just released a children’s book (“Chu’s Day”), written for the iconic British sci-fi show “Doctor Who,” and is set to return to the creation he’s best known for, DC Comics’ “The Sandman,” later this year in a prequel miniseries celebrating the character’s 25th anniversary.

But now readers also have the touching and terrifying novel “The Ocean at the End of the Lane,” a concentrated shot of Neil Gaiman’s trademark concoction of fantasy and reality, an unobstructed reminder of the loss that comes with growing up, and a powerful ode to childhood magic.