What a difference a zipper makes | Inquirer Lifestyle ❮ ❯ 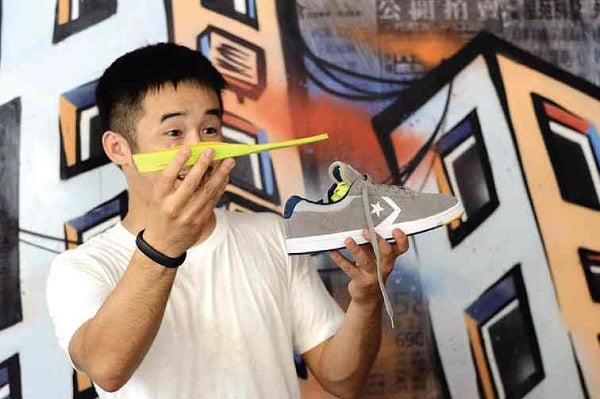 What a difference a zipper makes

There’s no other footwear brand that can claim to have as much rock-‘n’-roll cred as Converse.

It seems only apt, therefore, that the sneakers worn by rock stars, rap moguls, Hollywood and pop princesses as well as supermodels underscore this spirit with a collection that features studs, zippers and leather for Fall 2013.

There’s the double zipper found this time in a leather high-top; to remain accessible, it also comes in the classic canvas.

There’s a lot of hardware in the form of studs and spikes, or steel plate on the heel in a couple of styles, to create a premium feel. The stud element appears in both low- and high-tops.

The Converse x John Varvatos collection gets the finest treatment with a pair of high-top Chuck Taylors in burnished leather for that worn-in and distressed rock-‘n’-roll look, for instance, and a double-zip snakeskin-embossed metallic leather style.

There are also studded updates on the popular Weapon style, and a leather high-top that converts into a low-top when you unzip its spiked collar.

The regular collection isn’t too shabby either. For women, there’s one with tone-on-tone rhinestones, and new iterations on the previous season’s successful platform style.

“The style has been updated with a slightly lower platform, so you still get the height, and with an added zipper on the side,” said Rocky Xu, Converse Asia Pacific premium footwear merchandising manager, at the regional media presentation in Hong Kong last month.

The collection rolls out this July. Xu also showed high-top platform styles in metallic suede to be sold exclusively in Asia.

There’s a new look for the equally popular wedge-heeled Hi-ness, in the form of a suede model in three colors: oxblood, navy and cream.

For the fifth season, the brand rolls out another Converse x Marimekko collection, with four unisex styles using prints and colors from the Finnish company.

The Cons range is becoming a prime focus of the brand’s global business. The skate performance line is being developed to include skate-inspired products to encompass the cross-section of the sport, art, music and street culture, targeting what Converse refers to as the “creative active” market.

Cons for Fall 2013 borrows a few elements from its mother company, Nike, like the Lunarlon insoles, for example. It has updates on the styles named after skate pros Keith Anderson and Nick Trapasso.

There are also interesting updates in the vintage Jack Purcell line, though only a select few styles will be available in the Philippines, owing to its relative high price point vis-à-vis the Chucks. Chucks sell from P1,800, while Jack Purcells are in the P2,900 to P4,900 range.

The John Varvatos, sold in the Converse flagship stores, retail from P7,000 upward.

Asia accounts for at least 35 percent of the Jack Purcell market, the biggest in the world, according to Karin Hesselvik, Converse international communications director.

Named after the Canadian badminton champion Jack Purcell, who designed the sneaker and was later acquired by Converse, the original look resembled the Chuck Taylors, but with a single difference: the signature “smile,” a dark line drawn across the toe.

“We can’t really tell why it’s so big in Asia Pacific,” Hesselvik said of the Jack Purcell line that has evolved into styles featuring vintage washes, leather detailing, and other fabric treatments to distinguish it from the Chucks. “Maybe it resonates with the consumer who grew up wearing Chuck Taylors and now wants something a bit different and sophisticated.”

The media presentation was a first for the brand in Asia Pacific, and is indicative of Converse’s recognition of its growth potential in the region.

Converse doesn’t hire supermodels or Hollywood celebrities to endorse the brand, and instead taps personalities who truly embody its spirit. Underscoring this, it introduced the regional press to Bryan Siswojo, which it says embodies the “creative active” spirit of Cons.

Siswojo, who owns the 85ive2 skate shop in Hong Kong, is an Indonesian-born emcee who is a member of a hip-hop group, 24 Herbs, and is also a dad and an actor who will appear in Keanu Reeves’ “Man of Tai Chi.”

Converse is not going the way of celebrity endorsements, said Hesselvik. “Unless we can be authentic and true to our creative spirit, we’re not gonna do it.”

She also clarified that Converse isn’t a fashion brand. “We’re a lifestyle brand that’s lucky enough to be relevant to different consumers, including fashion consumers.”

Some years back, Converse phased out its basketball shoes to concentrate on casual sneakers.

Converse marks its 30th anniversary in the Philippines this year, where Filcon Manufacturing Corp., its distributor, used to make Converse shoes. It shifted to retail and distribution when the American company decided to manufacture its shoes overseas.

Today, Converse has 42 freestanding stores nationwide, and is available in all major department stores, athletic and specialty shops. Go said the brand continues to grow every year, and is the second biggest-selling casual-sneaker brand at SM Department Stores. Filcon carries the entire apparel and accessories range here.

Converse began producing the now iconic Chuck Taylor All Star in 1917 as a basketball shoe. The canvas and rubber sneakers, then called All Star, was later renamed after the salesman and basketball player who made improvements on the sneakers.

Converse, which was so huge in the 1960s till the ’70s, started to suffer from competition in recent decades; in 2003, sports giant Nike acquired the ailing company.