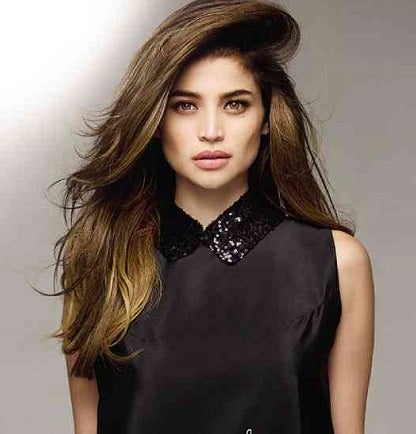 Plains & Prints owner Roxanne Farillas refocused her marketing strategy and tapped Curtis to be the new face of the fashion label.

In 2004, the brand got a shot in the arm when billboards of Gretchen Barretto dominated the skyline. Then the brand picked style mavens such as Celine Lopez, Paula Taylor and Liz Uy who appealed  to niche markets.

Farillas hopes that Curtis as  new endorser will have an impact nationwide as Plains & Prints sets up more stores.

“Anne is a chameleon. She can be a rocker or ladylike like Audrey Hepburn,” said stylist Uy. “I’ve been dressing her up since we were in college. Our fashion sense has evolved. She started out as a Roxy girl, very casual, but now she’s glamorous.”

Before Curtis left for her “Annebisyosa” concert tour to Los Angeles, she had a photo shoot.

In the dressing room, Curtis sat on the folding chair, her long locks loosely wound up in curlers while makeup artist Robbie Piñera carefully applied mascara.

About her Twitter draw, Anne said, “I endorse only brands that I can be proud of. A lot of followers on Twitter are intelligent. They know if you’re endorsing a brand that’s just put on—you don’t use it in real life. You have to be careful of what you endorse. You know that if you share it with followers, they will believe it. I’ve been lucky that the brands that have approached me to be their endorser are brands I can use.”

Like, how many units has she acquired from a developer which she has been endorsing?

Curtis broke out into her trademark giggle and naughtily said it was a secret. She has lost count of her endorsements. “I take them as they come.”

She was attracted to Plains’ versatility. “I see the stuff that Liz (Uy) posts and they’re nice. They are something anyone can wear.”

The actress cited an Instagram photo where she modeled a neutral-colored sleeveless dress with cream and beige striped skirt, cinched by a skinny belt and paired with red and black point stilettoes. She said she was channeling Audrey Hepburn.

“I posted it as my dainty Saturday outfit,” said Curtis. The post garnered 42,283 likes and 403 comments.

For her debut concert at Smart Araneta Coliseum last year, she took up lessons with Kitchie Molina, the go-to vocal coach of the stars.

“She taught me how to breathe properly while dancing at the same time. She would play the songs on the piano, and say, ‘No, you’re not hitting it.’ It was fun. She wasn’t too hard on me. She knew I hadn’t had any professional training till then,” said Curtis.

What does she do with her earnings?

“For a while I was into property (investment). Each year I set a quota for myself. Until I’ve reached that quota, I can’t spend. It’s a good way to discipline yourself and save for rainy days. When I decide to settle down or become a mom, I know that I’ll be comfortable and provide for my children and not rely on anyone else,” said the 28-year-old actress.

Curtis has come a long way from being a tweener from Australia who was approached by a talent agent at Jollibee on Boni Avenue. Her father, James Curtis-Smith, an Australian lawyer, was against the idea of his daughter getting media exposure. But her mother, Carmencita, wanted Curtis to be in the spotlight.

In her movie debut, “Magic Kingdom,” Curtis learned the rudiments of acting from directors Peque Gallaga and Lore Reyes and assistant director Eric Matti. What she acquired became the foundation of her technique.

Curtis pointed out that moving to ABS-CBN was a breakthrough. “I got noticed that I could do more than balikbayan roles. I was 19 years old. I was given more dramatic roles. I was no longer the cousin from the States.”

However, life isn’t always a bed of roses. Curtis counted the death of her baby sister, Claire Bear, as another turning point. Only four months old, the child suffered from cardioneuropathy.

Curtis, then 25, felt her knees weakened when her father called to break the news.

“You never know when you lose someone you love. You have to make the most of spending time with them and just be present in their life,” said Curtis ruefully.

In her career, one of her biggest lessons was coping with negative publicity. The press went to town with her wardrobe malfunction in “ASAP.” Curtis performed a dance number on the Boracay beachfront wearing a bandeau and culotte skirts. When her partner flipped her for an overhead lift, the bandeau slipped, exposing her right breast. Onlookers with mobile phones had a field day posting the photos. The videos went viral.

It hurt even more when the tabloids published the photos without censoring her breasts.

“Media can be very vicious. You’ve got to deal with it. It comes with the territory,” she said.

Curtis’ father told her that no decent person in media would print those photos. “I wanted to forget about it but I cried for a  month. Then you learn the art of deadma. Now I can joke about it.”

These experiences have kept a lid on her ego. Curtis added that she always acknowledged her humble beginnings to keep her grounded.

“When we moved here, we didn’t have the luxury of a car,” she recalled “We stayed with my mom’s family. My dad didn’t want to splurge on us. You look back when you weren’t a big star and didn’t have enough work. You value what you have.”