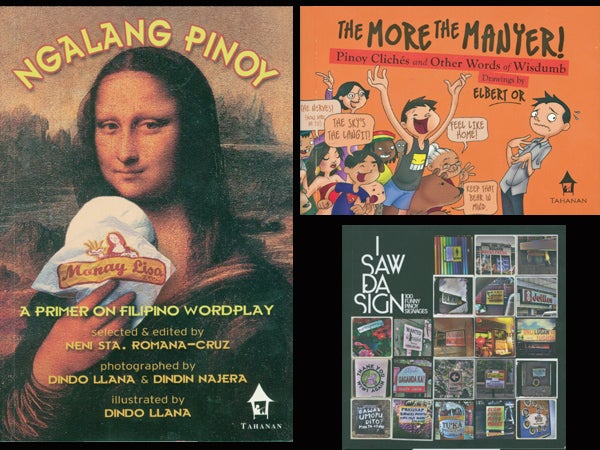 MORE PUN IN THE PHILIPPINES: Three books on the Pinoy’s facility for wordplay

Born of everyday ingenuity and perhaps a hint of either madness or boredom, Filipino signs are an art form by themselves. The signs are also a balancing act between being smart or knowledgeable, and being pilosopo (smart alecky).

Whether clever or naughty, obscure or obvious, these unexpected offspring of the English language and Filipino wit are also serendipitous and ubiquitous, appearing just when and where you weren’t looking—and so much funnier for it.

The obsession with funny Filipino signs and malapropisms is easily embodied in the books which have sprung up to gather these literate jokes in their bosoms. Perhaps the earliest example is “Signs of the Philippines,” by Raymund Floresca, Leslie Ann Murray, Valentino So and Jill Gale De Villa, published in 1970 by D.I.P. Ink. This out-of-print wonder contains cartoon reproductions of signages that the authors found funny.

It was this book that attracted the attention of writer and educator Neni Sta. Romana-Cruz. An American colleague of hers at the International School Manila was looking for a copy of  “Signs of the Philippines” because that colleague’s uncle had seen the book while in Manila.

“I told her that I was sure it was out of print,” said Cruz, who had written a series of Philippine pop culture books for Tahanan Books that included “Don’t Take a Bath on Friday: Philippine Superstitions and Folk Beliefs” and “You Know You’re Filipino If… A Pinoy Primer.”

It so happened that Tahanan publisher Reni Roxas was thinking of the same thing as a project for Cruz. “Reni wanted to capture the Pinoy sense of humor and our skill at punning,” Cruz said. “Many (signs) are so clever that you just have to admire the Pinoy creativity (that made them possible).  I am sure the people behind these names and unpretentious stories never took branding and advertising courses.”

Cruz was soon driving around Metro Manila looking for such signs for the book, often following sightings by other people. “It was not a very scientific method. I had to ask them where these (signs) were to be found,” she recalled. The result was 2005’s “Ngalang Pinoy: A Primer on Filipino Wordplay,” a grab bag of phrases that included everything from funky names of people and places, signs on vehicles, movie titles and slang.

Cruz’s own favorites from the book are all names of eateries: “Abu Sarrap” (a joint in Boracay depicted in a photo Cruz had snapped shortly after the Abu Sayyaf kidnapped tourists in Dos Palmas, Palawan) and the infamous “Cooking ng Ina Mo” and, right across it, “Cooking ng Ina Mo Rin.”

“Ngalang Pinoy” continues to sell today after several reprints. Cruz said that in the years since the book first came out, people are still reporting having come across similar signs.

Beyond the signs, malapropisms were the star in another best-selling title from Tahanan: 2007’s “The More the Manyer!: Pinoy Clichés and Other Words of Wisdumb,” which features hilarious but also authentic mangled phrases in Pinoy usage. Among the best are “Keep that bear in mind” and “Been there, been that.” A small book with big laughs, “The More The Manyer!” has spawned two sequels, “Without Further Adieu” and “I am Herewith Enclose.”

The most recent display of the Filipino full-frontal love for wordplay is Summit Books’ compact and full-color photographic tribute, “I Saw Da Sign: 100 Funny Pinoy Signages.”  Edited by Regina “Reg” Cadauan, the book is illustrated by actual photographs of the signs.

Cadauan, you see, manages Mang Juan Republic, the Facebook page dedicated to the snack food line Mang Juan, which, like Summit, is owned by the Gokongwei family.

Initially, Mang Juan Republic featured Pinoy trivia and quizzes, but in July 2012, the site began putting emphasis on Pinoy pop culture posts and Cadauan began putting up her photos of funny signs. Her first post was a sign in a wet market that was peddling eggs. It read: “Bili na you eggs.”

It remains her favorite. “It was the photo that started it all,” she said.

How exactly did she do that? “I personally keep a collection of random and funny photos (of Pinoy pop culture) taken years back,” Cadauan explained, adding that some were taken by friends.

“After a while, I felt the need to personally search for photos outside my network.” Her posts on Mang Juan Republic inspired visitors to the site to post their own finds.

According to Summit Books Team Publisher Christine “Koko” Ko, it was Summit Media President Lisa Gokongwei-Cheng who originated the idea of compiling the best Mang Juan posts into a book, curated by Cadauan. “I accepted the challenge because I believe it would be a fun book, something I myself would be interested in,” the book’s editor said.

The editor and publisher first met on the book in November 2012. Ko recalled how they went over hundreds of entries to be able to choose the 100 best entries. “We made sure the entries were really funny,” she recalled. “We had around five people looking at the choices and we took out the ’weak’ ones. It’s not enough that a word is spelled wrong. The error should be a really funny one, sometimes making the sign mean something entirely different.”

By April, the final 100 signs had been chosen and “I Saw Da Sign” came off the press with a huge 15,000 first printing and brisk sales. “The reception was quite wonderful,” Cadauan said, adding that she has received glowing feedback from social media, giving cyber-birth to hashtags like #benta and #onlyinthephilippines. “Almost everyone who’s bought and read it really laughed out loud,” Ko said.

Why the affinity with witty signs and mangled English among Filipinos?

Said anthropologist Dr. Michael L. Tan, dean of the College of Social Sciences and Philosophy at the University of the Philippines Diliman: “All cultures have wordplay and malapropisms, but I think Filipinos use more of these because we do have a sense of humor that includes making fun of ourselves.”

He added: “Malapropisms are often directed to English terms, reflecting our ambivalence not just about English but about the West: We recognize their advances but also want to say, ‘Hey we’re good too and we can make fun of your language.’”

Cruz said she believes the love for wordplay comes from parody. “We love to make fun at those “spoken in English” folks, especially those who try (too) hard without realizing all their faux pas.  It is our way of mocking the pretentious and those pretending to be bigger than they are.”

She also noted that funny signs and names have long been a favored topic in the Inquirer, whether by columnist Nestor Torre, the paper’s Metro section or SIM contributor Matthew Sutherland, whose essays about Pinoy names were early Internet hits.

The Filipinos’ predilection for unique names alone can easily be the subject of several books—both serious and not so—as well as seminars and courses.

For her part, Cadauan believes that wordplay comes as a winning form of social contact.  “I think Filipinos in general love comic relief and clever—sometimes naughty—wordplay as these attract attention with ease,” she said.  “I can also relate these malapropisms to current media and the latest trend, where connecting your sari-sari store name to a more popular idea or brand turns out to be successful in calling out to your customers.”

“It’s an art!” Ko declared. Wordplay is part of Filipino humor, she added. “I know Joey de Leon has a collection of funny signs that he found during his many travels,” she recalled, adding that she remembers seeing comedian Jimmy Santos doing a similar segment on a TV show where he played a news anchor who had trouble simply reading the news. “He even popularized the catchphrase ’I Love You 3x a Day.’”

“Wordplay in local languages is very rich, but unappreciated unfortunately,” Tan observed. “We’ve seen this in ’verbal jousting,’ in Balagtasan and in modern versions (like the Pinoy rap battles known as FlipTop), which suggest that verbal jousting will continue.  I’m hoping that as we learn to appreciate our own languages, we would see more elegant forms of verbal Olympics in the future.”

“Wordplay in local languages is very rich, but unappreciated unfortunately,” Tan observed. “We’ve seen this in ’verbal jousting,’ in Balagtasan and in modern versions (like the Pinoy rap battles known as FlipTop), which suggest that verbal jousting will continue.  I’m hoping that as we learn to appreciate our own languages, we would see more elegant forms of verbal Olympics in the future.”

As can be expected for a book that has found popular acceptance, “I Saw Da Sign” may just spawn a follow-up title quite soon. “We’re gearing up for a second book,” Ko said. “We already have entries.”

In the meantime, their publishing group will employ a very modern stop-gap measure: “We’re starting a Facebook account for whoever wants a fix of ’I Saw Da Sign’… until the second book comes out,” Ko said.

The Filipino’s virtuosity with expressions and names continues, of course. It sprouts like a weed and thrives like a hothouse flower even in the most difficult conditions.

Or perhaps it thrives because of such conditions?

Cruz believes it’s a combination of several things. “Our ability to laugh at everything even when we should be weeping is our coping mechanism,” she said. “It reminds us not to take ourselves seriously (and) puts us at ease.  It could also manifest a lack of self-confidence, some sense of insecurity-better to be self-effacing than to be found wanting. But for those who do not know us well, like the expats, they feel we laugh at everything and for no reason at all.”

Ko, for her part, believes it’s a sign of strength. “It only proves that we’re good sports, that we’re witty and smart. And that our ability of laughing at our own mistakes shows how Filipinos are really resilient. We can even laugh at the hardest times of our lives.”

If there’s anything we can take from the continued parade of funny signs, from “Signs of the Philippines” to “Ngalang Pinoy” and finally to “I Saw Da Sign,” it’s our capacity to laugh at the best and worst things. “No matter how big or small our mistakes are, we never let these dampen our high spirits,” Cadauan said. “We always look at the happier, brighter side of things and find a bit of comic relief in the process.” •