Eyeballing John Lloyd, but before that, Tessa and Dennis | Lifestyle.INQ ❮ ❯ 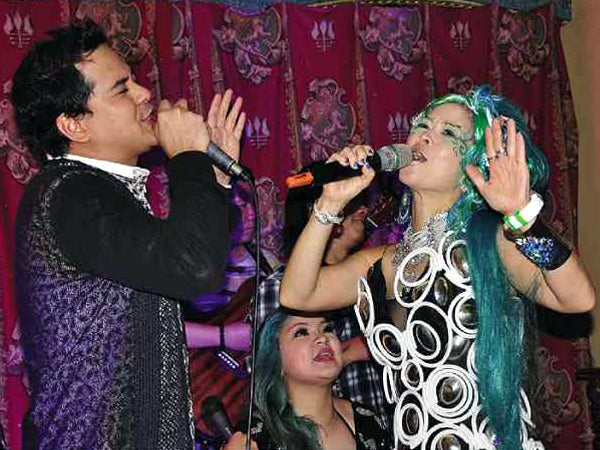 Eyeballing John Lloyd, but before that, Tessa and Dennis

The moment we heard “Careless Whisper” being sung/screamed— its notes borne by the pre-midnight wind from inside the house to the street where we were getting out of the car—we knew that this would not be a run-of-the-mill event.

The house of Dennis and Tessa Valdes is interesting enough, but that night, two Fridays ago, it went beyond interesting, to “storified.”

What greeted you was its façade that was “dressed up” and blue-lit with hanging lanterns that paved your way from the gate, up the steps to the front door. The look instantly evoked the sea; the exuberance was so Sea Princess, Tessa’s alias the past two decades, especially among her scuba-diving friends.

Those were so many come-ons for one night, on top of which Swatch’s boss and Lifestyle shaker/mover Virgie Ramos promised us some eyeball-to-eyeball time with “JL,” as they call John Lloyd, I would learn. (Such are the perks of a stressful job—mine, not JL’s.)

Inside, the Valdes home was decorated to bear the elements of the sea—the partying elements, if God ever willed marine life to party! A giant lionfish and jellyfish—their likenesses—were on display. “Mermaids” were in the pool, live ones. The second level was set up like an aquarium, without turning it into a full water tank, although knowing “Tita Virgie” and her creative director Rowell Santiago, the impossible must have been explored.

Guests were connected to what was going on in the living room, in the den and in the pool by an LED video wall.

Nineteen years ago, the Valdeses had a wedding that was just as interesting, if not more. Theirs was a Medieval Age-theme nuptial in 1994, complete with court jesters, if I remember right.

But then if you took out the daring themes and party elements, their marriage, come to think of it, has been one of tradition and revered Filipino family values that put God (Tessa is a daily churchgoer) and family at its core.

I once asked Tessa (for my book, “I’m afraid of heights”) what was her advice to today’s postmodern husbands like Dennis. In jest, she said, “Dennis has mastered the art of walking beside me or behind me, without stepping on my train.”

That was funny, but beneath the mirth, it denoted many things, foremost of which is how husband and wife, aside from supporting each other, give each other space, or respect each other’s space.

On the secret to their lasting union, Tessa says, “Dennis lets me be because when all the parties and events and fluff are done, I always come home to him.”

You can’t be more encompassing than that. Incidentally, our former professor at St. Theresa’s, Msgr. Manuel Gabriel, who officiated the wedding of Dennis and Tessa in 1994, was also there.

Indeed, that night Tessa and Dennis earned the right to be singing/screaming “Careless Whisper” on the mic—theirs must have been the voices I heard as we were entering the house—and the right to kiss, for 30 seconds, in front of some 200 guests.

(But then, also in the live-wire program, Tessa and John Lloyd sang “My Endless Love.” But that’s a minor detail.)

Tessa and Matteo Guidicelli hosted the Swatch Scuba Libre program where Zia Quizon sang her version of “Underwater,” the Swatch Scuba Libre theme song by British singer-songwriter Mika. Tessa and Matteo did an interactive storytelling. Alodia Gosiengfiao played a fashionista mermaid with Billy Crawford and Luis Manzano as, you guess it, seahorses.

Billy, Luis and John Lloyd did a dance showdown. A giant submarine birthday cake was wheeled in for John Lloyd. Then the balloons dropped for more Swatch prizes.

Mad About the Sea Awards for fashion were given to Myrza Sison and Digzy Umali, Audrey Zubiri and Pepper Teehankee (who had 378 starfish images on his shirt), Alissa Martinez, and Gretchen Barretto. Gretchen was in a beige Jil Sander and a set of South Sea pearls.

When all the balloons had dropped, I literally bumped into Ernie Lopez who was in triathlon shorts, certainly not the attire for a wedding anniversary party or watch launch. But then again, his was, in fact, the proper attire.

Looking puzzled, he said, “I didn’t know this was going to be a party. We were just told to come for a hockey game in the pool.”

After the main attractions came the fulfillment of Virgie Ramos’ promise: my style bonding with JL.

JL was in printed shirt, dark pants worn in his signature style, rolled up at the ankles—and net cardigan, all high-fashion brands. (No mention of brands, please.) JL must be among the rare guys I know who can get away with a net cardigan, and without seeming effete.

So what accessories do you go for, I asked. He gave me a look that said, don’t get me started on that.

But he did get started. Bags, he said, were among his weaknesses—clutch, regular bags, name it. So we talked on and on about bags. As I scrutinized what he was wearing, he explained how he mix-matched the pieces, and wore his white Swatch Scuba Libre.

He doesn’t rely on a stylist—not even if she was his girlfriend.

Did you get all this style orientation from Liz Uy (his ex)? “No, not really. I knew Jappy (Gonzalez, of the fashion-forward Univers) long before that.”

We talked about his preferences for shoes, clothes and scents.

We listened, incredulously, as he discussed leather.

That’s why, he explained, he prefers to invest in quality. He doesn’t mind buying expensive fashions if he likes their make and quality—“not the trends,” he said, although he looked fashion-forward that night.

So you want your girl to be über stylish, we asked?

“No, not necessarily,” he said, meaning he’s not style-specific when it comes to his girlfriend.

Did you come stag tonight, we asked.

“Uh, yes,” he laughed. Then as I turned to talk to Virgie, he added, “And I’m faithful to my girlfriend.”

Who’s your girlfriend? I asked.

Virgie’s eyes widened at me when she heard my question, as if to say, when did you land in your spaceship?