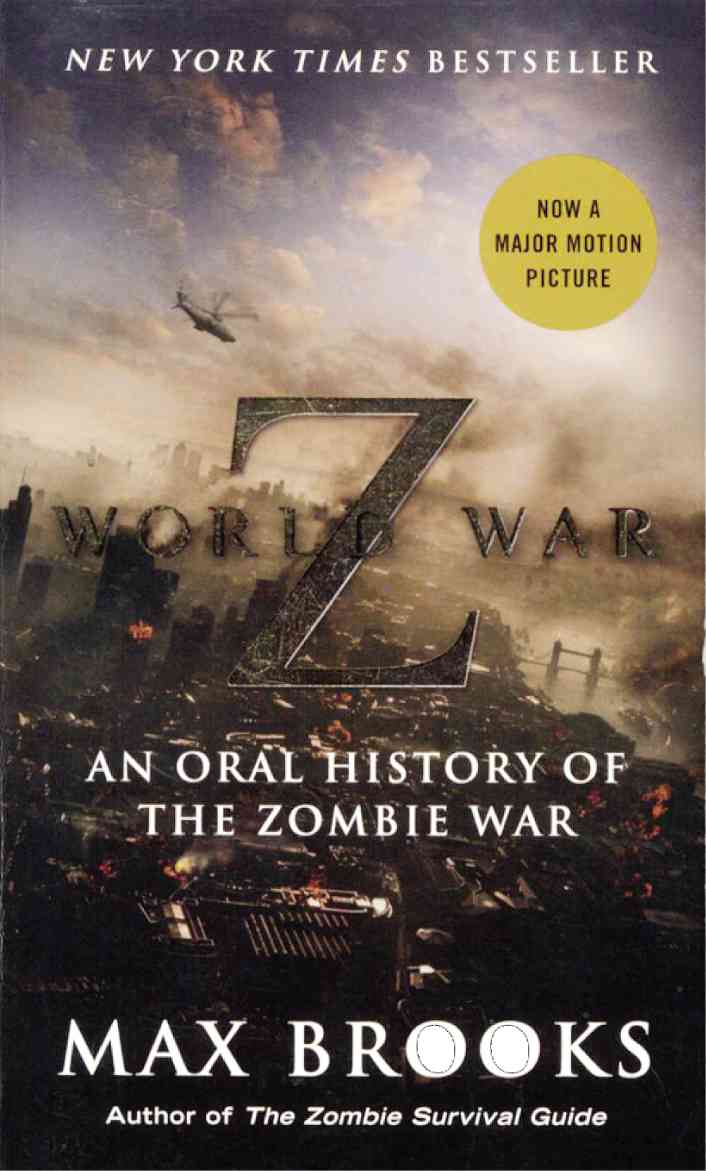 The greatest zombie novel in the ‘World’ Now that horror and the creatures arising from that genre are all the rage, it’s a good opportunity to sift through the growing pile of available material and take note of the best books of the group.

Vampires staked their place at the top of the ladder but have now been overtaken by zombies. The buffet of zombie-related work is fairly new, ranging from the tongue-in-bloody-cheek “Pride and Prejudice and Zombies” by Seth Grahame-Smith and, the greatest zombie book ever written, “World War Z: An Oral History of the Zombie War” by Max Brooks (Broadway Paperbacks, New York, 2006, 420 pages), now on the shelves in a movie tie-in edition.

That movie, directed by Marc Forster and starring Brad Pitt, just took a hefty chunk of cinemas last month and, as far as zombie movies go, is an action-packed, modern, worldwide look at what damage zombies can do. It’s also just the leftovers from the masterful meal that is the book.

“World War Z” isn’t even Brooks’ first zombie book. Taking note of how zombies were dominating the zeitgeist, the former “Saturday Night Live” writer wrote “The Zombie Survival Guide: Complete Protection from the Living Dead” in 2003. A satirical updating of zombie myths, the book was a bestseller, but it was Brooks’ next book, 2006’s “World War Z,” that really left a serious bite mark on readers.

Instead of taking the humorous route, Brooks wrote the most serious, most realistic novel about zombies he could imagine. He imagined zombies as the result of a virus that, with the speed of modern travel and the state of global politics, would spread faster than imagine. With “World War Z,” Brooks dared to imagine zombies as something real and immediate.

His bright idea was to write “World War Z” not with a single protagonist or narrator, but a disjointed series of reports from around the world from the beginning to the zombie plague to the end, covering some 10 years, and in the process imagining how the plague would affect different countries from communist China to New Jersey, from Japan to Antarctica. In every place, a different voice but the same threat.

“‘Zombie’ remains a devastating word, unrivaled in its power to conjure up so many memories or emotions, and it is these memories and emotions that are the subject of this book,” says the narrator.

There is no Pitt-played Gerry Lane character, though the “World War Z” researcher who ostensibly put the report together also works for the United Nations, albeit the UN Postwar Commission. That’s also why the novel reads more like reportage than fiction. If the zombies attacked, this is exactly how the reports would read.

It is precisely the novel’s ingenious structure that makes it resistant to generic movie-making, thus the resultant film is a very conventional slice of “World War Z,” sharing really only the title and a few superficial references.

There is no insect-hive-mind zombie intelligence at work here. In this case, the book is so much better. Instead of using zombies as a stand-in for human weakness, it is the humans themselves who make the book so compelling.

After governments with their own agendas fail to stop the spread of the virus, their old-fashioned ways of war fail to curb the apocalypse and bring humanity to the brink of extinction. It is then that “World War Z” finds its final act, when humans must find a way to save themselves, in the most modern manner.

Now on top of the food chain, zombies have now permanently risen to their place in pop culture, so that there is a best zombie movie (George Romero’s 1968 “Night of the Living Dead”) and the best comic book and TV show (the dynamically dead dual title held by Robert Kirkman’s “The Walking Dead”). Add to that shambling set the best zombie novel ever written, Max Brooks’ “World War Z,” a book so bleak it’s brilliant, and now resurrected in paperback form in time for a movie that it eats alive in every possible way.