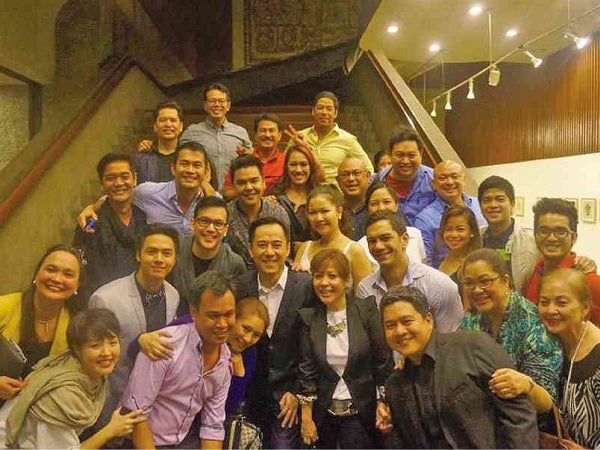 At the CCP Little Theater last July 5, musical theater actor Audie Gemora candidly recalled to a sold-out house his five-second audition for “Miss Saigon,” back when the musical’s creative team had just discovered the goldmine of homegrown Filipino talent.

Literally two words into his piece, he was cut off by a nonchalant “Next!” after which he was told that he “looks like he couldn’t hurt a fly.”

For someone local playgoers had started calling the “Prince of Philippine Musical Theater,” that audition was, for a time, the “ultimate sign” for Gemora that he wasn’t meant to be an actor.

Such anecdotal gems dotted “I Was Here,” Gemora’s solo concert under the CCP’s “Triple Threats” series. And, clearly, 15 years can make all the difference: The actor who flunked his “Saigon” audition was long gone. In his place was now a master storyteller and genuine entertainer.

The evening’s one-and-a-half hour program was an exercise in intimacy as well as familiarity. The audience—at its core, the names that populate Manila’s stages nowadays—came not only for a night of topnotch singing, which was expected, but also to toast, in chamber-hall fashion, local musical theater’s epitome of the leading man.

Consider, for example, the manner in which Gemora relayed how he got his start in Repertory Philippines. Through the song “You’ve Got Possibilities” from “It’s a Bird… It’s a Plane… It’s Superman,” he crafted a hilarious meta-duet impersonating theater stalwarts Baby Barredo and the late Zenaida Amador dissecting him on his first audition for the company. It’s a scene anyone who has ever attempted to enter Rep (and anyone who’s heard of the duo’s legendary directorial prowess) knew all too well, down to Barredo’s smoke-puffing and Amador’s bulldog demeanor.

Stories about his struggles in 1980s America (“when there was still no place for Pinoys on Broadway”) were juxtaposed with a couple of medleys that only illustrated his versatility. We’re talking here of a singer who can easily shift between acting-laced numbers and conventional microphone play (he is, after all, an Awit Award winner “for New Recording Artist—at 32!”).

A medley of songs from his early years—“Cool” from “West Side Story,” “Oh, What a Circus” from “Evita”—was followed by a clutch of pop ditties, or as he put it, “mga kanta ng papa ko”—“Moon River,” “Someone to Watch Over Me,” Cole Porter’s “Night and Day.”

If anything, Gemora sounded eternally fresh and young as he revisited those old roles, while painting his sincere, personal touch on the standards.

The arrangements were creatively spun by Rony Fortich, Hong Kong Disneyland’s resident musical director. Vincent dela Cruz played double bass, and Karmi Santiago, who played drums, was undeniably another of the evening’s standouts. Hats off, after all, to anyone who could get away with a percussion-infused “Try to Remember” from “The Fantasticks”—a wistful ode to love that’s written like it’s drum-proofed: “Try to remember/ the kind of September/ when life was slow/ and oh so mellow.”

Midway through the concert, Gemora, together with guest star Sam Concepcion, launched into a duet of “Deep Within” from “The Lion, the Witch, and the Wardrobe,” an original Filipino musical they first did back in 2003. It was only then that we saw, or more precisely, heard the evening’s first glimpse of Gemora as the unparalleled showman.

Singing the role of the lion Aslan (yes, the one by C.S. Lewis), any trace of pop-chart topper, any remnant of the former romantic lead was quickly shed off. Here, at last, was the polished, strapping baritone.

From there, it was one spotlessly sung musical theater number after another: “If I Loved You” from “Carousel” paired with “If Ever I Would Leave You” from “Camelot;” “Stars” from “Les Miserables” with “The Impossible Dream” from “Man of La Mancha.” To witness him plow through some of the theater canon’s toughest numbers with expertly balanced force and restraint—there couldn’t have been a more thrilling sight.

The highest point of the evening was his performance of “Awit ni Isagani” from the musical “El Filibusterismo” (scored by Ryan Cayabyab)—a moment of consummate theatricality as he plumbed the depths of this haunting aria with a rare veracity of character. This was followed by a duet with guest star Regine Velasquez on “Matimyas Mabuhay sa Sariling Bayan” from “Noli Me Tangere: The Musical”—the harmonies exquisite, the musicality luminous.

If any were needed at all, here was unassailable proof that Gemora belongs to the stage and wouldn’t—shouldn’t—be leaving it anytime soon.