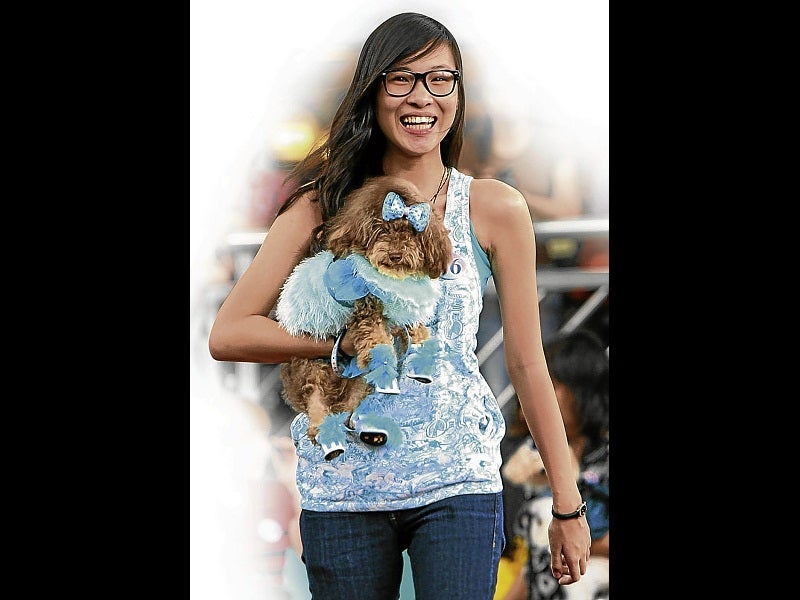 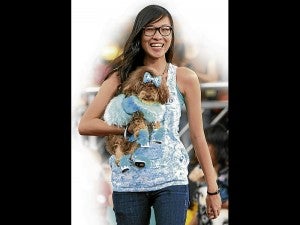 A dog-owner friend quipped once that she refused to dress up her dogs because other dogs might mock them.

Clearly this wasn’t a concern of participating dog owners at the PCCI Fashionista Pooch competition last weekend at SM Mall of Asia.

Though I dress up my own dog on occasion, I still found it amusing and even strange to see people hovering in the staging area with hangers and mini-racks of frothy, glittery gowns and whatnot for their pampered pooches. The little fur balls had their own entourages!

It was one thing to see finalists of the dog show championship getting groomed and primped—for instance, Shih Tzus’ manes being brushed and coiffed to beauty-pageant perfection—but still another to see, say, poodles carried around like delicate infants, if infants wore long, tiered tulle gowns with headdresses. It was the canine version of “Toddlers & Tiaras”—cute if a tad twisted.

While it may seem all fluff on the surface, the canine runway tilt has a more noble purpose: to promote awareness on responsible pet ownership, particularly the importance of yearly anti-rabies vaccination, according to Joya Gonzalez, public-education coordinator of PCCI. The venue host, SM Supermalls, is a supporter of the government’s Zero Rabies 2020 campaign. 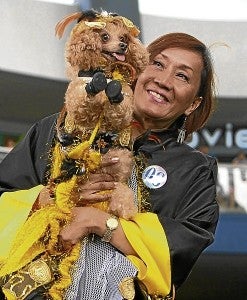 “Guests… also have an opportunity to talk with professionals who can answer their questions or provide advice about their special friend. In addition, the event… offer[s] a variety of entertainment for everyone in the family, even if they are not pet guardians yet.”

PCCI has held over 30 events of this kind since 2009. On Sept. 3, it will host a similar contest at Riverbanks Mall in Marikina called “My Dazzling Furball.”

Last week’s tilt had the biggest turnout by far, with 44 entries from all over, from Laguna to Bulacan. It was also the first time it was held alongside the more formal and structured championship dog show of PCCI.

Philippine Canine Club Inc. is a non-profit organization which aims mainly to promote and encourage love for pure-bred dogs. “We wanted mall goers to visually experience both a formal type of show and a free-flowing fashion competition,” Gonzalez said.

Unlike the dog show championships, though, the Fashionista Pooch event was open to all pure-bred dogs below 15 inches in height, even those unregistered with PCCI. There were Shih Tzus, Chihuahuas, toy poodles, Pomeranians, mini schnauzers, dachshunds, a Lhasa Apso, a beagle, a Yorkshire terrier, a cocker spaniel. 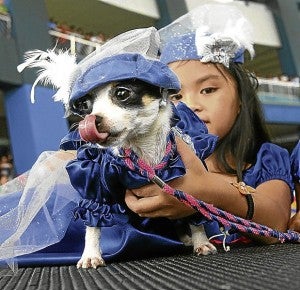 Marble, a year-old chocolate poodle owned by Jocelyn Dy, a dog breeder from San Juan, emerged overall winner in his nappy, faux furry aqua tee and matching booties. Dy’s daughter Hannah, who carried the pooch on the red carpet, said it was their first time to compete in such an event. Marble was also named Best Dressed Male.

Eleven awards were given, with loads of prizes, from dog food and treats to grooming paraphernalia. Participants seemed to have been lured not so much by prizes as by the sheer fun of it.

“The doggie guardians enjoy dressing up their dogs,” Gonzalez said. “It gives them an opportunity to show off their pets.”

Considering the apparent competitiveness of the participants—some of the costumes were, in street parlance, kinarir (turned it into a career)—Gonzalez said the dog guardians haven’t lost sight of what the event was about: good fun.

“So far we have had no sore losers. And the nice part is that the participants end up meeting in the show for the first time even if many of them already being friends on Facebook. In fact, there was a group of poodle lovers who met up and had an ‘eyeball’ at the event.” 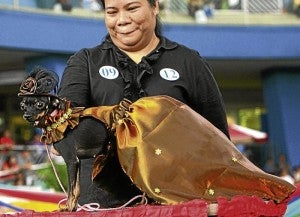 However, some dog owners get  carried away, seemingly without consideration for the animal’s comfort. One contestant glued false eyelashes and sequins on his dachshund! Gonzalez said she also disapproved of the owner’s action.

“We have fortunately not been the target of animal rights activists,” Gonzalez said. “My dogs love dressing up. I know that they like to strut even at home in their nice clothes and accessories.”

As for the heat and humidity in the venue, despite the sheer number of electric fans, it was the first time PCCI held the shows in a non-air-conditioned hall, she explained. “We held the one at MOA due to the clamor to hold an event there.”

Her advice to dog lovers who wish to deck out their pooches? “The pet should be treated like a toddler. Therefore, no sharp objects, no toxic elements, nothing that may irritate the skin, no fragments that pose choking danger. Also, when your pet is wearing and strutting his/her stuff, the guardian must be vigilant at all times.”

No guarantee that these would get your pooch immune to mockery. But perhaps they can snap back that the mockers are unfashionable, uncouth and—ewww!—naked.