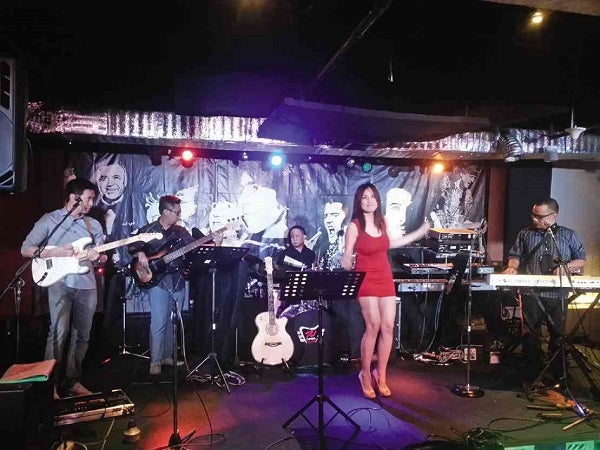 ANNA Melissa with the band Crib. PHOTO BY POCHOLO CONCEPCION

Bistro RJ was part of our youth in the late 1980s, although we can’t really recall a particular gig that we would always remember. In fact our most memorable night at its old branch on Quezon Avenue was an incident involving our Jingle Chordbook Magazine colleague turned filmmaker Lav Diaz, who was refused entry because he was wearing sandals.

But there were a few times when we would hang out at the club when it moved to Jupiter Street in Makati several years ago.

Last week, we checked out its latest incarnation at the basement of Dusit Thani hotel in Ayala Center, where pop balladeer Nonoy Zuñiga was having his second reunion gig with his old bandmates in the Family Birth Control (FBC). This was the group Zuñiga was performing with at Siete Pecados in Philippine Plaza hotel in 1980 when a bomb went off in the men’s room where he was combing his hair. He survived the explosion but one of his legs had to be amputated.

At the Bistro RJ show, Zuñiga went back in time and retraced his roots—first as a folk singer doing covers of the great folk-rock/pop artists of the ’70s. Playing a Virtuoso model RJ acoustic guitar which, he said, was given to him as a gift by club owner Ramon Jacinto, Zuñiga sang snippets of hits by Don McLean, James Taylor, Jim Croce, Loggins and Messina, Jose Feliciano, Paul Williams and Cat Stevens.

We were quite transfixed at the sight of Zuñiga as a guitar-playing act, even as his vocals almost mimicked the respective styles and nuances of the aforementioned artists. His versions of Croce’s “Time in a Bottle” and Loggins’ “Danny’s Song” struck a chord in our memory as a kid who was turning to music for the first time as a shared passion with friends.

The mood brightened further when FBC went onstage to represent Zuñiga’s second phase as a performer. After the band stirred more memories with the Stylistics hit “Stop, Look, Listen (To Your Heart),” Zuñiga sent women in the audience swooning to his note-for-note rendition of the Lou Rawls classics “You’ll Never Find Another Love Like Mine” and “Lady Love.”

Zuñiga recounted anecdotes with FBC before he and co-singer Jiji Sanchez got into a humorous routine that included trading falsetto vocal parts in “You Make Me Feel Brand New.”

Sanchez’s own falsetto was put to good use in Earth, Wind and Fire’s “Reasons,” which again included a humorous routine with saxophonist Dexter Ansay testing Sanchez’s ad-libbing skills.

The third phase of Zuñiga’s music career, as a solo pop hitmaker, was the most familiar to the audience, who were apparently thrilled to hear “Kumusta Ka,” “Init sa Magdamag” and “I’ll Never Say Goodbye” with the original singer himself up close and personal.

The club, which had a full-house crowd that night, had a cozy, informal vibe. We liked its tuna salpicao and ice-cold San Mig Light.

FBC obliged to a couple of dance tunes as encore numbers, prompting a few in the audience to stand up and join the fun.

“Nonoy used to dance onstage before the bombing incident,” Zuñiga’s manager Nelia Lim told us. Perhaps the bombing was a blessing in disguise, we thought, because if not for that, he might not have turned into a pop star.

But that’s just us playing with our imagination. Onstage, Zuñiga was enjoying every minute like history was repeating itself.

Earlier, another of Lim’s talents, female singer-songwriter Anna Melissa, opened the show with a round of pop, rock and soul covers, the most striking of which was her version of Cyndi Lauper’s “Girls Just Wanna Have Fun.”

The Music Museum at the Greenhills Shopping Center was another hangout of our distant carefree days. This medium-sized, theater-type venue has withstood passing trends and a fire that temporarily halted its operations. But it’s still there in its original location, never blinking in former owner Kuh Ledesma’s vision of presenting some of the best world-class Filipino performers.

The free show, attended mostly by Filipino students and Japanese expats, was a mind-bending explosion of fusion-inspired spontaneity. One of the band’s numbers, “Walkin’ Around the ‘K,’” was a freewheeling exercise that ran the breadth of traditional and contemporary jazz.

Cabangon himself was inspiring in his jazzed-up version of “Bulag, Pipi at Bingi,” backed by Unit Asia. One of his original tunes, the bossa nova-flavored “Tinamaan Mo,” revealed his experimental flair.

This was a gig that highlighted camaraderie and goodwill among musicians of different nationalities.

The San Mig Light at the Music Museum, by the way, is affordable at less than P100, but was rather warm when served.