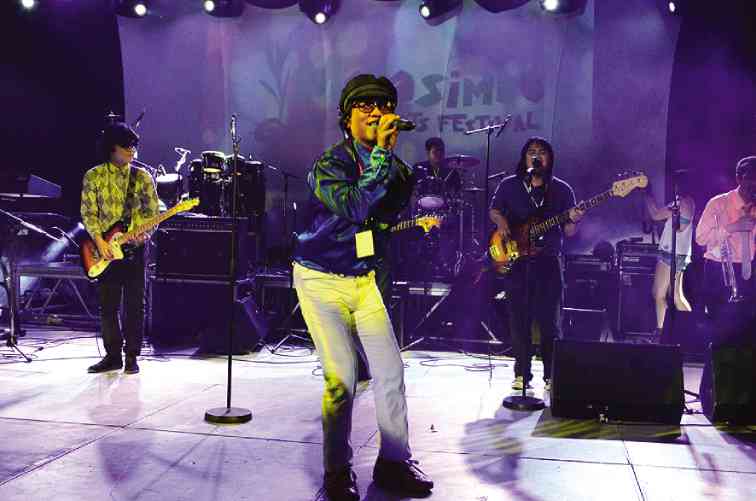 Malasimbo Music & Arts Festival to expand next year, but promoter is careful about overcrowding

There’s nothing quite like it in the Philippines—a three-day music and arts festival headlining some of the most exciting local and international performers, along with progressive visual artists exhibiting their works, at an open-air venue in a majestic mountainside called Malasimbo, about 10 minutes’ drive from Puerto Galera in Oriental Mindoro.

Launched in 2011 and held annually since then, the Malasimbo fest has been steadily gaining an audience, despite its great distance of 130 km south of Manila. Perhaps that’s part of its appeal—one has to travel for more than four hours by land from Manila to the Batangas pier, hop on a boat for another hour or so to Puerto Galera, and finally take a jeepney ride that will negotiate steep, winding roads to get to the festival site in Malasimbo.

We were fortunate to have attended Malasimbo’s third edition last March—which, promoters said, was so successful that they immediately decided to finalize the fourth edition and extend it to four days: Feb. 28-March 2, 2014.

There is wisdom in making that early announcement. First, it will allow the promoters to work harder in mustering ample support by way of logistics and sponsorship. Second, it will give the audience—especially those with tight budgets—enough time to save up to make it to the fest next year.

Three factors to made Malasimbo a truly memorable event:

Choice of performers. This year’s lineup featured 21 acts, mostly young Pinoy bands that have been making good impressions in the independent local music scenes in Luzon, Visayas and Mindanao, as well as Australian and Japanese club DJs. We didn’t catch all of them, but there were a number of local acts that captured our attention. Though the Flippin’ Soul Stompers played nothing but covers of funky Motown and other black music classics, the band’s energy and dynamism put some heat in the cold mountain air.

a foretaste of what the legendary Jimmy Cliff would unload moments later.

In contrast, the unlikely crowd favorite Quest bounced off ample doses of R&B and hip-hop that almost turned the venue into a dance club.

Top-billing the first night was Grace Nono, a native of Agusan province in Mindanao who, despite having been part of Malasimbo in previous years, kept the crowd hypnotized with her uplifting folk-ethnic sound and elegant dancing, augmented by an ensemble led by her husband, Berklee alumnus Bob Aves. It had all the elements of world music, indeed, but no description captured it better than “Filipino.”

Cliff, the second night’s headliner, was a wondrous sight to behold. At age 65, he was a bundle of joy and passion undiminished by the years he has spent as a pioneering Jamaican reggae artist who preceded Bob Marley. When Cliff and his band opened their set with “Wonderful World, Beautiful People,” it sounded powerful enough to vanish the concept of evil.

The festival’s main act, British female singer-songwriter Joss Stone, took a long time to start her set, her technical staff seemingly bothered by kinks in the audio system. But the crowd’s impatience was overcome by gladness when the gorgeous Stone finally emerged in her signature barefoot hippie look, spreading good cheer and excitement by way of an astonishing voice that channeled the great soul singers of the distant past.

Mood and ambiance. Because it’s high up in the mountains, Malasimbo cast a magical spell and put people in a stress-free mood. We never imagined there is such a place near the beaches of Puerto Galera, although it got so cold and chilly on the third night that we worried the strong winds would send us rolling downhill. For a while, the intermittent rains threatened to mess up everything, but the showers somehow enhanced a blissful ambiance that could possibly be similar to that of paradise.

Artistic community. Malasimbo is also about the visual arts; this year its Sculpture Garden around the concert site showcased the works of more than 20 artists including Agnes Arellano and Olivia D’Aboville, daughter of festival co-founder Hubert, whose D’Aboville Foundation focuses on the preservation of nature, sustainable development, and eco-cultural tourism in Puerto Galera.

It wasn’t noticeable enough, maybe because we didn’t enter the festival grounds at daytime, but there is actually a year-round Mangyan Village Exhibit in Malasimbo that imparts knowledge about Mindoro’s pre-colonial culture.

According to Hubert, this year’s Malasimbo had the biggest total crowd attendance of 6,000 spread over three days—double that of last year’s. But though it will expand next year, Malasimbo’s delicate grounds cannot hold too many people.

Hubert said he wanted to limit the audience to 10,000 so as not to destroy the environment. The gods will love him for that.