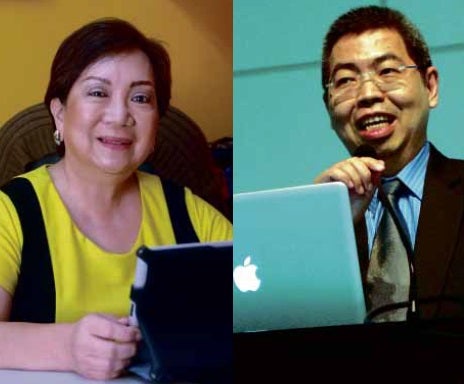 MANELLE Jose (left) whose vision has been restored. Dr. Harvey Uy is part of a three-man team that tested stem cell therapy for vision restoration in retinis pigmentosa. ROMY HOMILLADA

Making the blind see may no longer be an outrageous feat encountered only in books. What was once labeled a “miracle” is now the subject of intense study by the scientific community. The key to restoring vision? Why, yes, stem cell therapy, of course.

The stem cell therapy that began in November 2011, while still limited to the cure of the inherited eye disease retinitis pigmentosa (RP), has already restored the eyesight of 10 subjects.

RP is a degenerative disease that has, until today, no known cure. It is the most common inheritable cause for blindness—1.5 million people around the world are blind from it.

RP is a group of hereditary eye disorders that affects the retina’s ability to respond to light, causing people to slowly lose their vision until they go completely blind.

For most people afflicted with RP, when the slow death of the retinal photoreceptor cells occurs, the peripheral vision gradually darkens until one is left with a “tunnel vision.” Over time, the tunnel vision becomes smaller until one day everything becomes completely dark, when blindness finally settles in.

The inevitable progress of the disease can begin in a person’s teens, such that they become completely blind by the time they reach adulthood.

“There is no other more devastating eye disease than retinitis pigmentosa, because they start off life with fairly good vision,” said Dr. Harvey S. Uy, vice president of the Philippine Academy of Ophthalmology and research fellow in ophthalmology at the Research and Biotechnology Division of St. Luke’s Medical Center.

Uy said about one in 4,000 have the disease in the US and Europe, and, according to the Beijing Eye Study, one in 1,000 in China. In the Philippines, Uy estimates about 100,000 people have the disease.

Manelle K. Jose, a 67-year-old businesswoman, was among the 10 patients cured by stem cell therapy, and one of Uy’s guinea pigs for stem cell therapy for vision restoration in RP back in 2011. She said she first noticed something was wrong when friends complained how she cropped out their heads or feet every time she took their picture.

“That was 15 or 16 years ago, before the age of digital cameras. I would have a hard time seeing each time I peeked into the viewfinder,” Jose said. After seeing a row of doctors here and abroad, Jose learned she had RP.

Her doctor then informed her she’d have “useful vision” until she turned 80. She was given a daily supplement of 15,000 IU vitamin A Palmitate—an overdose for normal people, but necessary for one with RP to slow down the progression to blindness.

But by the time she hit her 60s, she only had 17 percent of her vision left. She had a cane, wore dark sunglasses to protect her vision, and could not go anywhere without her aide.

Prior to her treatment with Uy, Jose had the opportunity to try embryonic stem cell therapy but turned it down because she was not comfortable with where the DNA would be coming from.

And then a friend of hers, who had such a terrible heart condition she could hardly move and breathe, tried autologous stem cell therapy (stem cells harvested from the patient). This friend, said Jose, got completely healed from her heart condition and was able to exercise like normal people in the gym.

“That was like watching a miracle unfold. If that worked for her, it might work for me,” Jose said.

Jose consulted with Uy and a team from Ticeba (Tissue and Cell Banking), a German company with an office here in Manila, headed by no less than its founder and managing director, Dr. Christoph Ganss.

She said Ganss’ team harvested her stem cells, froze them before shipping to Heidelberg, Germany, where they were isolated, processed and grown significantly, and then frozen once again before being brought back to the Philippines.

A dose of .05 ml is injected into the eye while a larger dose—the “leftovers”—are delivered into the body through IV for overall wellness and rejuvenation.

“In retinitis pigmentosa, there is malfunction and eventual destruction of the cells of the retina or film in the back of the eye. Stem cell therapy aims to replace these cells and restore eyesight. Numerous animal studies have demonstrated the ability of stem cells to differentiate into functional retinal cells and improve visual function,” Uy said.

“With our current dosage, it takes three to six months for patients to see an improvement in vision,” Uy said.

For Jose, however, she noticed a difference within a few weeks. Not only was she feeling a lot better physically, but she also noticed her eyes were no longer as watery as they used to be. It is normal, she said, for patients with RP to constantly have somewhat teary, watery eyes.

After her second injection, her eye was able to shift from light to dark quickly, and she was seeing better. It was also about that time that her family went on vacation to Hong Kong. When everyone left her on her own at the hotel—her children and grandchildren had gone off to Disneyland—she decided to go out on her own for the first time in years.

“I would never know what was going to happen to me if I ventured out on my own until I actually did it. I had to do it,” she said.

When her family returned to the hotel, they were surprised to see bags upon bags of someone who got carried away shopping the entire day. “What else was there to do? I went shopping! I felt so free because finally I was functioning like a normal person again. I could go out on my own,” she said.

Today, three stem cell therapy treatments after, Jose has 20/25 vision. A 20/25 vision means she can clearly read the second to the last line in the eye chart vision test. And she no longer crops people’s heads or feet when she takes pictures.

But is the effect permanent, or would patients need a continuous cycle of therapy—possibly for a lifetime?

“Our early experience using autologous skin-derived stem cells indicates that vision improves after treatment, then plateaus or stabilizes. We are investigating whether additional injections will allow further improvement in vision,” Uy said.

So far, for two years, the effect has been sustained, he added, but beyond that he can’t really say. Treatment is stopped after the third therapy. Today, he said, they wait and see what will happen next—“they may do better, they may do worse, or they may do the same.”

All eyes treated have manifested with improved vision. Those who started with the ability to see bright light, for instance, can now see movement. The earlier the treatment is applied, the more functional vision the patient will regain.

“Think of advanced RP as a car starting from a standstill position. It takes a longer time and more gas to accelerate to 100 kph.  Someone with less severe disease, say 50 percent vision, is like a car going already at 50 kph. It will take less time for this person to reach 100 kph. We are testing whether injecting larger quantities of stem cells will result in faster visual recovery,” he said.

So far, Uy said he has seen no significant side effect or any tumor formation. Since cells are harvested from the patient’s own skin, he said there is no chance of rejection.

“The patients do not need medicines to suppress their immune systems, so are spared the risk of secondary infections from these immunosuppressive drugs. There is a small risk of eye infection after injection. However, with proper clean procedures, I have not seen any infections in our patients,” he said.

The current eye infection rate from any eye injection is about one in 10,000. One stem cell-treated eye developed transient, mild increase in eye pressure that was controlled with eye drops. Uy said this observation suggests that stem cells have the potential to treat eyes with low pressure, or shrunken eyes.

“The main pro is the potential to restore eyesight in patients with an incurable blinding disease; as a consequence, these patients’ quality of life improves. The main constraint is the cost,” he said.