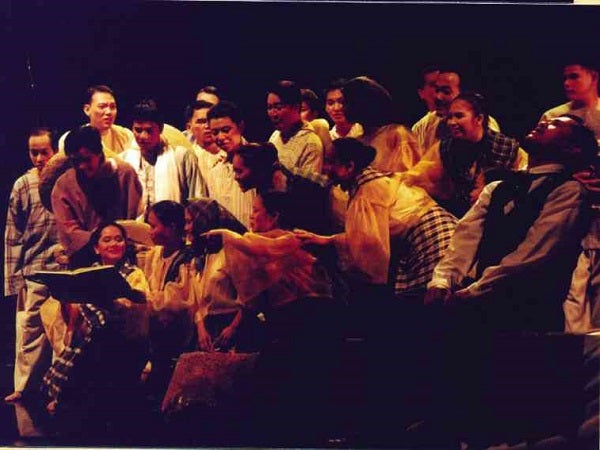 During halcyon days at Ateneo de Manila high school, one student, Paul Dumol, was so bold as to write three plays, two in Tagalog and one in English.

Aba, critical response was not only favorable but “extremely” so. And so Dumol decided that playwriting would be his vocation.

Decades later, he is still at it. His plays may be few and far between, but they always have an impact on the audience. In fact, his favorite plays are those the audience (including this playgoer) remembers: “Ang Paglilitis ni Mang Serapio,” a frightening, Kafkaesque tale about a beggar facing a kangaroo court of peers; “Cabesang Tales,” in which a persecuted character from Rizal’s “Noli me Tangere” goes underground; “Ilustrado,” a musical about Rizal (with music by Ryan Cayabyab); and “Ang Pagpatay kay Luna,” a grim musical about the assassination of Gen. Antonio Luna in Cabanatuan, with music by Jessie Lucas.

He adds: “When I say that it  ‘touches’ the audience, I don’t just mean its emotional impact. For me, the intellectual impact is just as important, and is probably harder to achieve.”

So what makes for depth?

Dumol’s latest play to be performed is a work on the Philippines’ first saint, San Lorenzo Ruiz, titled simply “Lorenzo” but now billed as a rock musical with music by Ryan Cayabyab, and book and lyrics by Chris Vallez.

DLSU-College of St. Benilde in Manila; there will be two performances per day, 1 p.m. and

6 p.m. Those who expect the play to be a pious retelling of the life and times of San Lorenzo may be in for a rude shock.

Dumol, who does researches on his subjects, says that the saint committed some kind of a crime: “With regard to the crime of Lorenzo Ruiz (played by Lorenz Martinez), the reality or nature of which is open-ended to this day, we have taken the stand that it was real, that he was guilty of at least manslaughter.”

Part of the play deals with Lorenzo’s initial hesitation to confess faith in Jesus Christ before the Japanese.

“In fact,” according to the playwright, “he inquired whether he would be freed if he renounced Christ. That’s in Act 3. Taking advantage of artistic freedom, we have portrayed Lorenzo as someone who found it difficult to forgive. We do not know, of course, if the real Lorenzo was that way, but we portray him with that struggle in Act 2.”

What is emphasized is not the supernatural or the miraculous, but a “crucial irony” in the martyr’s life: “the assistance given him by the Superior of the Dominicans to flee Manila leads instead to his death in Japan, as though God played a cruel joke on him. In the play, Lorenzo complains to God about that.”

“Nothing miraculous happens in the play,” Dumol asserts, which may disappoint some. “On the contrary, the sufferings of the martyrs are portrayed in detail, in so far as this is possible onstage. Two of them recant, which happened in real life, but both find their way back to the faith. Ryan’s rock music, of course, should help to foil any sentimental tendencies. Hopefully, the choreographer (Christine Crame) will use the hip-hop idiom in the three or four dance sequences to further block the audience from attempting to assimilate the play to hagiographic portrayals of saints.”

“We know a lot about the trial and martyrdom of Saint Lorenzo, but hardly anything about him and even less about the circumstances of his flight from Manila,” says Dumol. “We know nothing about his imprisonment in Okinawa. This was instrumental in the decision to make ‘Lorenzo’ a musical. A musical tells a story in broad strokes, which is all we can do with the real Lorenzo.”

After some 45 years in theater (he was in his teens when he started), Dumol cites “the importance of openness to anything and everything to create works that ‘work.’”

He concludes: “Experience is there to supply techniques, but beyond that are the friends we have, the people we read (who can go back to the 14th century), and contemporary culture to come up with a mix that will grab the audience’s attention and burrow into its soul.”