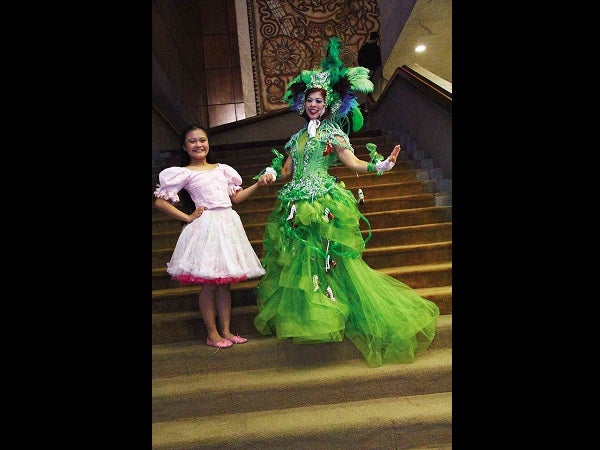 Don’t be afraid to take those life-defining challenges

IN EMBRACING LIFE, one needs to fuel desires and conquer challenges. Life, as we all know it, is too short to pass on chances to experience what the world has to offer.

So when Tanghalang Pilipino asked me to join its season opener, “Sandosenang Sapatos,” in a cameo role that would require singing in Tagalog, I was initially apprehensive but did not hesitate to say, “Yes.” I haven’t sung publicly since my stint on “Celebrity Duets” many years ago, and my singing has not really been a talent, but I’m never going to say no to a new challenge.

Besides I’m a master at camouflaging my vocals. Rocky Gathercole, avant-garde designer, created a diwata ng sapatos or shoe fairy costume for me, which perfectly fit with the whimsical designs of James Reyes, the production designer.

Sunday night is the finale, so those readers with spare time may want to catch the show at the Cultural Center of the Philippines at 6 p.m. I will be there together with the two other diwata who took part in the play. I am excited to wear my diwata crown, designed by Mark Tenchavez of Shander Shoes.

Being a musical about shoes, Ohrelle Shoes is generously sponsoring part of the last production. Ohrelle Shoes owner Linda Pastoral told me that their shoe line is 100-percent Pinoy-made, thus supporting the local shoe industry mostly from Marikina City.

They sell only locally crafted shoes and bags. After shopping in the Ohrelle branch at Cash & Carry, Linda and I promoted the show to the Friends of CCP Organization.

Costumes truly can save the day. Master designer Eric Pineda once created a spectacular Queen Victoria ensemble for one of my performances in Celebrity Duets. Since then, Eric has created many of my major theme party attires.

Eric also dressed flamboyant resort owner Ado Escudero at his recent 80th birthday celebration at Villa Escudero. Ado was dressed like a royal king in white and gold, with a matching headdress.

The all-day festivities were highlighted by the celebrator’s river entrance on a giant pagoda barge as the entourage made their grand entrance into the ballroom. Guests were in costume as well as they were part of the parade of continents to greet Ado on a spectacular stage. Belly dancers, muscle men, folk dancers and a cast of hundreds entertained guests all night long.

The Filipino Tenors, Club Mwah dancers and Gary Valenciano took the entertainment to the highest level after dinner. After the grand finale that included Dulce, the dance floor opened with a hot Tango Group number.

Not to be missed

In equal extravagance and spectacle, the Ablaza family celebrations are not to be missed. Imagine a giant glass diamond with your name etched on it by way of an invitation for the 75th birthday party of businessman Louie Ablaza Jr.

The diamond birthday party was celebrated at the NBC Tent at The Fort in Taguig City, in the Ablaza tradition of amazing décor and beautiful production. Designed and produced by son Jun-Jun Ablaza, the party adopted the James Bond theme “Diamonds are Forever,” with his dad, Louie, making a grand entrance after the trademark Bond film countdown as “Secret Agent 0075” with a bevy of Bond girls as escorts.

Despite the presence of 500 guests, the ambience remained intimate and private, as emceed by Johnny Litton. The Manila Symphony Orchestra provided the music of the evening, accompanied by the Philippine Ballet Theater. Cocoy Laurel, fresh from his “Miss Saigon” rehearsals, rendered a few songs, but the highlight of the evening’s entertainment was the special numbers from the Ablaza grandchildren.

Marc Ablaza’s sons, Xavi and Santi, did a song and piano number while Jofe and Czarina Syquia’s children, Alfonso, Agu, Azi and Amanu, started out with a special violin ensemble, followed by a solo violin and song number by 4-year-old Azia, who received a standing ovation. Louie, in his brief remarks, expressed thanks for fond memories with friends, for the love and support of his wife and fellow honorary consul, Mellie, and for the children and grandchildren that make the Ablaza clan proud.

Another recent birthday celebrator was jeweler Candy Dizon, who celebrated her 41st year at the Tivoli Restaurant of the Mandarin Oriental along with an intimate group of friends.

As her birthday offering, several exquisite Jul B. Dizon jewelry pieces were on 41-percent discount for that lunch alone. If you weren’t invited to the lunch, try and get invited next year as the discount may be even higher!

And if you can’t wrangle an invite to Candy’s birthday lunches, then head over the Jul Dizon jewelry stores, which are now celebrating their 35th anniversary. The milestone is being observed with “Ode,” a special exhibit paying homage to world-class icons. The exhibit also highlights designer Janina Dizon’s own sixth anniversary store opening with JBD Jewellery. The exhibit will be held on July 23 at the Rigodon Ballroom of the Peninsula Manila.

The displays will showcase each designer´s own personal style and artistic perspective. More importantly the jewelry will be on sale at the event. Sounds like an anniversary not to be missed!