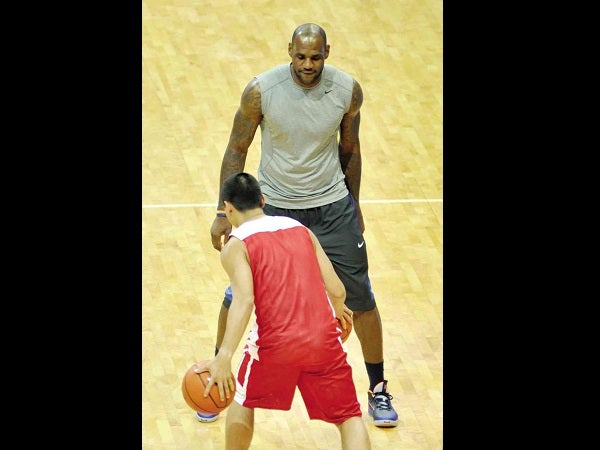 LeBron James: ‘This is something I’ll never forget’

As everyone at the Mall of Asia Arena awaited the arrival of “King James,” his most loyal subjects were all staring at the stage where he was to appear. The arena was covered in darkness, with only the eerie glow of thousands of mobile phone screens held aloft providing illumination.

Then the screen parted and Miami Heat’s LeBron James, hardcourt’s most hailed player, stepped out to greet his fans. “Make some noise, Manila!” his voice boomed.

No prompting was needed—his fans finally let out a collective scream that has been building up for weeks, since Nike Philippines announced its plan to bring LeBron to Manila.

“This is crazy,” said James.

Apparently he had no idea how big a following he had in the Philippines. “It’s my first time here, I didn’t know what to expect. This isn’t my last time here. This is something I’ll never forget.” he added.

This must have been a moment for goose bumps and tears for grown men, when LeBron joined the country’s top basketball players—under 16’s, collegiate and pro—to shoot some hoops. Before they could start their little hardcourt tussle with their idol, however, the coach had to get the players’ attention first. “Bitawan niyo muna ang mga telepono (Drop your phones first)!”

LeBron came out dressed for hardcourt action in shorts and white shirt. His trademark headband was nowhere to be seen, however (it’s probably hanging on the NBA finals championship trophy).

More screams erupted when he took off his shirt to change into a gray jersey and removed his Nike LeBron ST Low 2 to change into his basketball shoes, the Nike LeBron Zoom Soldier VII. His eager opponents were in fluorescent orange or red Nike Lebron x Lows and red jerseys, the word “Witness” emblazoned on the front, primed and ready to shoot hoops.

Anyone with Internet connection and access to TV knows of LeBron’s basketball prowess. The four-time NBA Most Valuable Player is an amazing aberration of a baller; many marvel at his speed and agility given his massive size. The stats are showing him to the hall of fame in basketball.

Seeing him in the flesh makes you wonder how someone so big can possess lightning speed and lightness of foot, but then he raced down the court and slam dunked that ball with omnipotence and you stopped wondering and just stared in awe instead.

He also showed off his more playful side—he caught one of the under-16 players mid-run to lift the kid off his feet to help him make the shot. It was the most-cheered assist of the day.

Naturally, the players who were brought out to play with him weren’t immune to the presence of the King. “It was definitely a pleasure and a privilege to step on the court with LeBron. I didn’t even prepare much for the game because I was too starstruck, I just wanted to watch him put on a show,” said NU Bulldogs’ Ray Parks Jr.

“We were just talking about his former teammate Dexter Pittman. We trained with him this past summer and I told LeBron that I was able to meet him,” said Ateneo Blue Eagle Kiefer Ravena. Kiefer must have been thanking his lucky stars that his ankle had healed by the time of LeBron’s arrival, especially after the two shared an alley-oop play. Ravena handed the ball to LeBron just in time for him to show off one of his famous slam dunks.

LeBron was also able to show the audience his football-worthy kicking skills as he punted ball after ball to the eager audience. The signed basketballs he threw towards the audience were a huge hit; one man even forgot his sense of decency when he trampled on a kid already prone on the floor and made him cry and grappled with another kid for possession of the ball.

There was a scheduled five-on-five game between the Smart Gilas players and UAAP selection who called themselves “Team LeBron” for the day (LeBron was also their coach for the day). After a brief huddle, the game started, though no one cared about the score, they were merely waiting for Team LeBron to lag behind so Coach James would have no choice but to step in and show everyone how it is done. 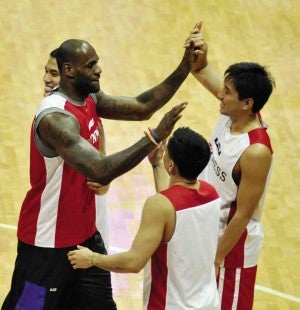 After donning a red “Witness” jersey over his gray one, LeBron went to town, sinking baskets and even doing a reverse slam dunk at the expense of player Ranidel de Ocampo. After the clock had run out and the Smart Gilas players won the game, LeBron took the mic for his closing remarks.

“First of all, on behalf of Nike and myself, we just want to thank each and everyone of you guys. I will continue to do my part, continue to inspire you guys, continue to make sure you guys love the game of basketball. You guys just keep being passionate the way you are, you don’t have to change a thing, you’re unbelievable, so give yourselves a round of applause.” said James.

He paused to add, “The reason I missed those two last shots is because my jersey’s too damn small, so forgive me.” He laughed.