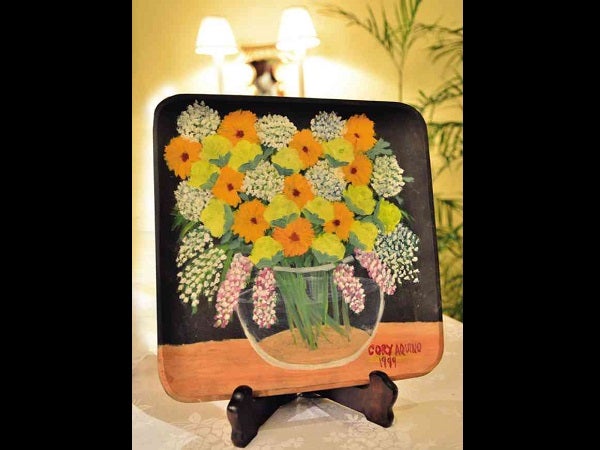 Hard to forge, Cory Aquino’s paintings are ‘Gift of Self’

Two years ago, a painting in watercolor, supposedly by the late former President, was offered to Heritage Art Gallery.

When the gallery owner verified the authenticity of the painting with artist Jeffrey Consumo, who gave Aquino art lessons, he told the owner “not to accept it.”

Consumo said Aquino, who took art lessons from 1996 to 1998, was not into watercolor.

“She wanted to feel the paint, and she could not do that with watercolor,” Consumo said in a phone interview.

“It was obviously a fake, and I advised the gallery owner not to accept the painting,” he added.

The alleged “dealer” of the painting never contacted the gallery again, Consumo said.

Deedee Siytangco, the late President’s spokesperson, has this advice to those offered with a Cory Aquino painting: “Look at the front for Cory Aquino’s signature. And look at the back for her signature, date and a dedication.”

According to Siytangco, her former boss “never sold a painting.”

“Each painting is a gift. It has her signature, the date and even a dedication. It is a part of herself. It’s priceless,” Siytangco said.

Over 80 of these priceless paintings by Cory Aquino, mother of President Benigno Aquino III, will be on exhibit at the Lobby Lounge of the Manila Hotel beginning Monday. The exhibit is titled “A Gift of Self.”

The exhibit will end on Aug. 2, which is also the fourth death anniversary of the former President and icon of democracy.

The artworks on exhibit are all on loan from its owners, mostly relatives and friends of Aquino, Siytangco explained.

“I’m here in a hotel room with the paintings. I don’t want them out of my sight,” she said.

She’s appalled at the thought that someone would dare forge a Cory Aquino painting. “Pati ba naman s’ya (Can’t they spare her)?” she said.

She assured the public that all the paintings at the Manila Hotel exhibit are  genuine, authenticated and the ownership verified.

In fact, each painting has a story to tell.

In October 2006, for instance, the late President gifted lawyer Paquito Ochoa Jr. with “Special Blue Flowers,” an acrylic on paper. It was her way of thanking the lawyer for helping her son with his congressional bid in Tarlac.

On Oct. 21, 2002, she gifted her friends Dr. George and Mary Ty with an oil on canvas with the dedication, “With many thanks for the wonderful time in Shanghai.”

In January 1997, the democracy icon gifted her friend, Mary Ty, with an artwork, an oil in wooden plate, with this dedication: “Happy Birthday! I wish you more years of good health, much happiness and continuing prosperity. God bless.”

In October 2005, Cesar and Corrie Purisima received an oil on canvas painting as a wedding gift from the icon of democracy. In 2010, Cesar Purisima was named finance secretary by President  Aquino.

Siytangco said it would be difficult to “forge” a Cory Aquino painting. “If they say they have one, show me the back of the painting.”

She said the late President had donated two or three of her paintings to organizations, which auctioned them to raise funds. But Siytangco said the buyers were also known to her and the Aquinos.

So far, she has not heard of any owner who had sold a Cory Aquino artwork.

“She has a way of holding the brush that produce the strokes. It’s very natural. It’s like her soul,” Consumo said.