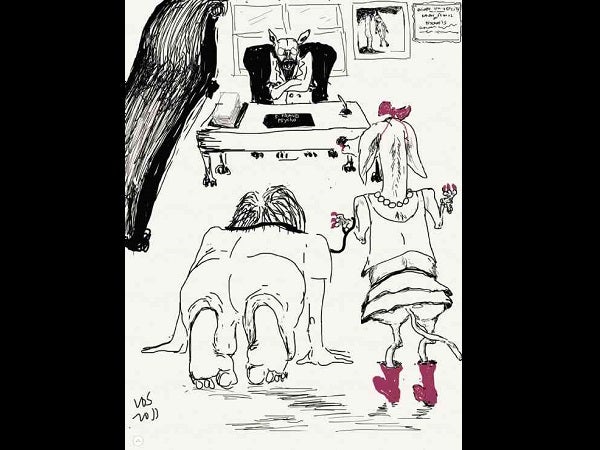 For love of dogs

Something about dressing a dog doesn’t sit well with me. But maybe I should hold my tongue on such issues of taste. After all, I like to dress my own Kleenex boxes and toilet-paper rolls in laces and frills, and drink from glasses wearing crocheted, tight-fitting bottoms.

I also like to crown my wine bottles with toques, wrap them in miniature aprons so that they look like little chefs, and I like to pour their contents into long-stemmed crystals with their bases shod in jusi slip-ons.

But then dogs are different. They definitely have feelings, of love, for one thing, and their hearts, like our own, are breakable. They’re affected by what happens to us. Our own Badja was proof, both in life and in death. She lost her joie de vivre and died of a broken heart shortly after my first husband and I had broken up.

My grandson Rafael brought back memories of a similar case, when he asked for another dog for his 21st birthday on June 24. He already had Samantha, a Labrador puppy, as a gift from his parents on his eighth birthday. But he wasn’t ready for the responsibility of taking care of a dog, so Sam had to be given away to a friend’s family, and has ended up loved and cared for: She’s now a healthy, happy mom herself to her own litter.

While Raf may now deserve a second chance, it’s still best, I told him, to wait until his family gets its new home and garden, which seems a near prospect.

Aside from feelings, dogs have a mind, too, the downside of which is that they’re not immune to such psychological disorders like schizophrenia and other forms of identity crisis—afflictions I have observed among crossbreeds in particular. That’s why (and here I can’t seem to help myself again) the sight of dogs dressed like humans unsettles me.

For instance, a lustily furred dog, once accustomed to dressing, could, like Eve after losing her innocence, begin to feel shamefully naked and refuse to go out unclad and unshod. It gets serious when the dog quite unnaturally starts walking only on its hind legs, yet, positively confused, won’t settle for just one pair of shoes.

To be sure, veterinary medicine has responded to this development with a new specialty: canine psychology.

If only I had had access to it, I might have been able to straighten out the terrier-dachshund crossbreed I got myself for company when I lived alone in an apartment. My first mistake was to name him Rodentito de mi Vida—“Rodentito” for his mousy looks, “de mi Vida” for the promise of lifelong affection. I called him Rodent, for short.

Too soon he outgrew his puppy cuteness and began behaving like a bad-tempered spinster who didn’t like anyone else but me.

In his later years, after I had moved into a house to be with my children, he turned into a sex-starved beast who couldn’t leave tables and chairs alone until he discovered the human leg. He then proceeded to dedicate himself to the shameless pursuit of gardeners, and drivers, meter readers and bill collectors.

Just before we all went mad, I found the remedy—Panda, a female terrier owned by my manicurist. Poor Panda, she did not survive his onslaught; she fell ill and died without puppies despite Rodent’s overzealous siring attempts.

Panda’s death left Rodent inconsolable, refusing to eat, until the vet suggested balut. He ate nothing else, and it did him in: The deadly delicacy of fetal fowl in a shell raised his cholesterol count to levels his already broken heart could no longer take. Anyway, I doubt any dog psychologist could have saved Rodent—his case would seem one of heavy karma.

In the name of love

This was long before the dog whisperer Cesar Milan went on international TV to show us the way to a healthy and happy relationship with a dog of any breed or crossbreed. He has convinced me that a dog is happiest, more responsive, and brought to his or her highest potential when it is clear to both dog and master who’s who: A master does not gain the dog’s respect and trust unless he asserts himself indisputably.

I’m not absolutely against treating dogs like humans. Brushing their teeth or buying them toys is probably all right. Taking them to the beauty parlor or the spa may be a bit of a stretch, but, well…

Anyway, I’m not sure dogs care one way or the other as long as what’s done to them or for them is all in the name of love. Besides, spoiling dogs doesn’t seem as harmful as spoiling children. Some dogs indeed can be more lovable and more loyal than some of our own species.

But without some sense of moderation, we could ourselves get confused about the relationship. Parading our dogs on Halloween in costumes that beat the spectacle of a gay parade, for instance, could only further everybody’s confusion. Seriously now, I wonder if a dog’s heroic instincts are not put at risk this way, enough for it to hesitate and miss the split-second cue to jump in front of a car or into the water to save its master’s life.

Just recently I saw emotionally moving shots of dogs as excellent babysitters. Indeed there’s a natural love link between man and dog. But notice how Cesar Milan himself sneaks in a back kick at the trainee dog when he gets out of line. Given their own proud sense of self, dogs do need to be reminded who’s boss.

There surely is a time and place for a dog in everyone’s life. My husband and I are not ourselves past desiring a dog’s company—it’s in fact an item in our 20-year plan. But, as in the case of my grandson Raf, we, too, have to wait until our situation becomes ideal: We may have the time, but not yet the space.