Escriva successor to be beatified after reported miracle | Inquirer Lifestyle 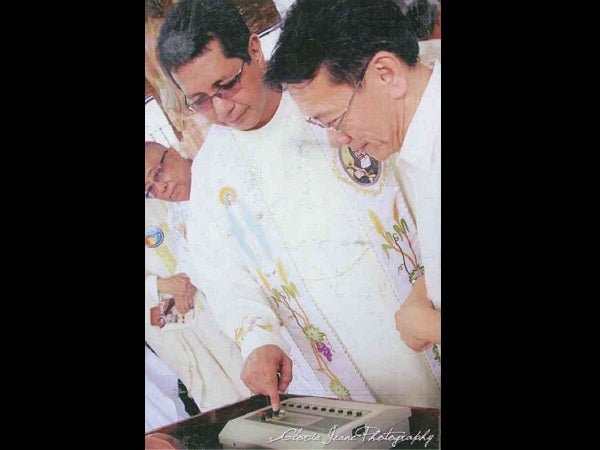 FR. JOJO Gonda, parish priest and rector of the Shrine of St. Padre Pio, pushes the button to signal the ringing of the bells in the belfry tower.

Escriva successor to be beatified after reported miracle

The Holy See has affirmed a miracle attributed to the intercession of Venerable Alvaro Portillo of the Opus Dei, paving the way for his beatification.

Portillo—who succeeded St. Josemaria Escriva as head of the Prelature of Opus Dei when the latter passed away on June 26, 1975—is said to have interceded for the recovery of the then infant José Ignacio Ureta Wilson. He suffered a cardiac arrest lasting more than 30 minutes on Aug. 2, 2003.

Wilson was born on July 10, 2003, in Santiago de Chile, and was very unwell. His condition included a “tetralogy of Fallot” (a combination of four cardiac defects which results in deoxygenated blood mixing with oxygenated blood) and an omphalocele, a protrusion of the abdominal contents through the abdominal wall.

After the cardiac arrest, Wilson’s parents and family reportedly prayed only to Venerable Alvaro Portillo. The boy recovered.

Pope Francis has reportedly approved Portillo’s beatification, based on the report from the Congregation for the Causes of Saints.

The final beatification date has yet to be announced. In the meantime, those who want a prayer card of Don Alvaro can write me through Inquirer Lifestyle on Chino Roces Ave., Makati City, with a self-addressed, stamped envelope for easier mailing.

After the blessing of the Mother of Mercy Belfry in St. Padre Pio Shrine in Sto. Tomas, Batangas, by Manila Archbishop Luis Antonio Cardinal Tagle and six bishops on July 13, the bells are now ringing to call the faithful to prayer and the celebration of the Holy Mass.

Fr. Jojo Gonda, parish priest and rector, has always envisioned building a belfry tower, four floors up, to call the faithful to prayer. It became a reality when Dr. Mercedes Oliver donated the bells from Holland and financed the construction of the belfry tower.

Only through God’s grace can one explain the miracles that have been happening at the St. Padre Pio Shrine.

The efforts of Father Jojo and the generous supporters of his project are helping build the shrine of the saint.

“Faith and a lot of prayers” explain the miracles, according to Father Jojo’s sister, Sonia Gonda Gloria.

One of these miraculous events is the reported healing of sick people who go to the shrine for the Healing Mass celebrated by Father Jojo every 23rd of the month at 9:30 a.m.  There are reports of people being “slain” and the sick getting well later.

Sept. 23, the feast of St. Padre Pio, will be a big day in the shrine when the completed church will be blessed. Franciscan Capuchin Fr. Ermelindo di Capua will come all the way from San Giovanni Rotondo to attend the blessing. It was Father Ermelindo who took care of Padre Pio when he fell ill and eventually passed away on Sept. 23, 1968.

Fr. Benjo Ledesma, parish priest of Our Lady of the Assumption in Leveriza, Pasay City, says the fiesta theme this year responds to the celebration of the Year of Faith.

He says: “Our main theme is ‘Building Our Church, Building Our Community: Our Faith in Action.’ We actively work to renovate our dilapidated church and at the same time build our community through Basic Ecclesial Communities (BECs).”

Dr. Jaime Dy Dyliacco will give a muscle-testing workshop at Sacred Heart Center from 9 a.m. to 4 p.m. Sunday.