We're Not Out of the Wuds Yet | Inquirer Lifestyle ❮ ❯ 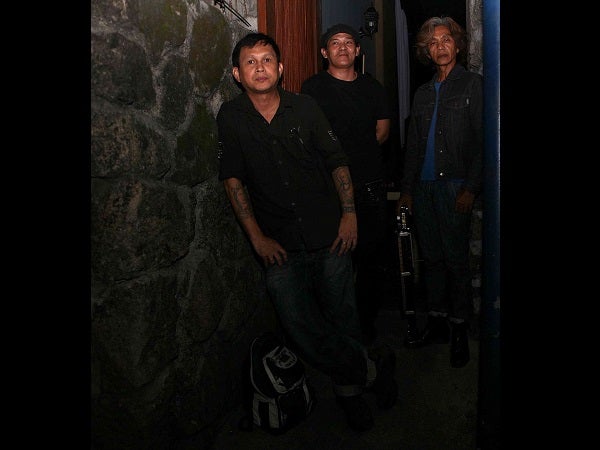 We’re Not Out of the Wuds Yet

The first time I saw The Wuds perform was in August of 1986, at the Trinity College gym.

It was a fund-raising concert called “Oi! Punk! May Concert!”

The poster featured the leering cartoon visage of a mohawked punk and the line-up, which included George Imbecile and the Idiots, the Urban Bandits, Betrayed, Biosparks and the Deadends.

That should have given me a clue as to what to expect.

Still, I was wholly unprepared for what transpired when The Wuds got on stage to play.

As the trio leaned into the rapid-fire two-chord slam-a-lama of “Patay-Buhay,” a mutant sea of spiked and gelled hair, acid-washed jeans and combat boots started pogo-ing and slamdancing in the mosh pit. Above the din and feedback, unless my ringing ears deceived me, I thought I could hear the chorus mutate into “Hare Krishna, Haribol.”

It had been at least 15 years since George Harrison embraced the blue-skinned Hindu god, but this was light years away from the mellow stylings of “My Sweet Lord.”

Closer to home, Sampaguita had also sung the Maha Mantra in “Sa Diyos Lamang” in 1978, and Pabs Dadivas had released an entire album titled “Hare Krishna Haribol” a year later.

But this was something else entirely: The savage punk rock attack of The Wuds, as well as the rage and angst they exuded onstage, seemed antithetical to the blissed-out state of mind associated with the bhakti yoga philosophy espoused by the Krishnas.

Some years later, American hardcore bands like the Cro-Mags and Shelter started blending Krishna-conscious lyrics with punk and thrash metal in a musical subgenre that came to be known as “Krishnacore.” (The unlikely mix was best illustrated by the cover of the Cro-Mags’ second album “Best Wishes”: a painting of Narasimha, the half-man, half-lion incarnation of Vishnu, ripping a demon’s heart out with his claws.)

Well, The Wuds were there first.

And, against all odds, they celebrated their 30th anniversary last July in, of all places, the “Concert at the Park” at the Luneta, the last punks standing.

The day before, a devastating super typhoon had swept through Luzon. A little over a month later, Ninoy Aquino was gunned down at the airport.

Marcos on the wane, the economy in shambles, rumblings of political dissent growing—as the Stones had sung, the time was right for fighting in the streets, boy.

Guevara and Balingit were Singalong homeboys born and bred, growing up streets from each other in that tough Manila neighborhood. Guevara had grown up in a middle class household on Estrada—his father was a lawyer and notary public—but Balingit lived in the “looban” along Zapanta, a notorious gang-infested ghetto built atop a disused pre-war cemetery. Adriano had relatives in the ’hood, and started hanging around the other two, bonded by their common interest in music.

In fact, around 1980 or ’81, Guevara and Balingit had formed an acoustic folk singing group called Think God, playing James Taylor and Crosby, Stills and Nash covers at various Shakey’s pizza parlors around town. They found a girl singer, and reformed into a Peter, Paul and Mary-style group. They changed their name to The Woods, after the Jethro Tull album “Songs From The Wood.”

But folk’s gentle lyricism seemed out of step with the unsettled mood of the times. By the end of the ’70s, punk rock had arrived. DZRJ disc jockey Dante David, ak.a. Howlin’ Dave, had begun playing the Sex Pistols and the Clash on his radio program. Back in Singalong, the future Wuds were also being exposed to the new sounds, thanks to neighborhood poet Fidel Rillo’s cassette collection.

By 1983, a local punk rock scene was in full swing. (There was even a Punk Rock Dance contest on “Eat Bulaga!,” believe it or not.) Balingit and Guevara took the plunge, enlisting Adriano on drums. They renamed themselves The Wuds, after learning that “wud” was an obscure Scottish word meaning “mad” or “insane.”

In a matter of months, recalls Adriano, they were discovered by Howlin’ Dave while rehearsing in a studio on Evangelista street. They came to the attention of punk rock pioneer and impresario Tommy Tanchangco, who promptly enlisted them to his Twisted Red Cross record label.

Although The Wuds started out doing covers of Sex Pistols and Clash numbers, they were soon composing original songs. Their early efforts were released on the Twisted Red Cross compilation albums “Brave New World Live” and “Rescue Ladders and Human Barricades.”

Guevara became a Krishna devotee in 1979 after attending services at a nearby Hare Krishna temple, and immersed himself in the bhakti yoga philosophy, which preached spiritual salvation from the chains of the material world through complete devotion to god. The lifestyle included embracing vegetarianism, forswearing drugs and alcohol, as well as sex for anything other than procreation, and chanting the Maha Mantra. By 1981, Balingit and Adriano had also become interested in the philosophy, and the band began their long association with the Chaitanya Mission, a breakaway faction of the Hare Krishna movement headed by Jagat Guru Chris Butler, which also influenced many other Pinoy rockers, including Sampaguita, Pabs Dadivas and Cynthia Ayala.

In any case, the philosophy inspired many of the band’s songs. According to Guevara, the anti-materialistic Krishna philosophy seemed to fit into punk’s general disaffection and discontent with society. The band spearheaded a “Punks for Peace” movement through a series of local concerts, an ironic twist since hardcore punk concerts were notorious for the occasional brawl or stabbing incident.

By 1985, they had released their first album on Twisted Red Cross, “A.R.M.S.T.A.L.K.,” an acronym for Armies’ Reunion for Modern-age Service and Training in Attainment of Love and Knowledge. Despite the lo-fi recording, the record still brims with primitive energy, and remains a landmark of local punk. The previous year, an article in Jingle magazine by Lloyd Moore had described them as “Charismatic Punks,” a fitting description since they had begun to attract a hardcore following among the local punks and prabhus (Krishna devotees).

It would take a decade, however, before The Wuds would release an album again, 1995’s “Oplan Kahon,” which included Balingit’s classic “Inosente Lang ang Nagtataka,” one of the band’s enduring anthems.

By that time, the hardcore punk scene had gone largely underground, and the so-called “alternative” music scene was in full swing. The Wuds were considered senyors by a new generation of Pinoy rockers, one of whom—Rico Blanco of Rivermaya—would later pay the punk pioneers homage by recording a cover version of “Inosente Lang ang Nagtataka.”

The same year The Wuds released “At Nakalimutan ang Diyos” on Heber Bartolome’s Akasya Records, which had another classic in the title track, a rant against those who attain material success at the expense of their spiritual lives. The band had clearly evolved beyond their roots in hardcore. The trademark intensity was still there, as was the disillusionment with society. This was one band that was not afraid to be preachy. But The Wuds sound had matured beyond punk into something that harked back to classic Pinoy rock.

As the band members matured, their writing also became more refined, says Guevara. The angst and anger of the early songs was toned down, but the lyrics were still preaching the way things should be.

“Basically, punk is more than just music,” he says. “It’s more about pushing idealism and philosophy.”

The band released two more albums in the late ’90s—“Gera” and “Nakaupo sa Puso”—both on Ed Formoso’s independent label. Since then they have settled into a more relaxed gig schedule, while pursuing individual projects.

These days, Guevara is better known as a tattoo artist. Although he graduated with a degree in architecture from Mapua, he never took the board exams. He started dabbling in tattooing in 1989, eventually opening the Avatar Arts tattoo parlor and helping organize the Philippine Tattoo Artists Guild (Philtag) in the 1990s.  Today his main gig is inking a steady stream of body art aficionados, although he also has a side band called the Kirtaneros.

One of the reasons The Wuds has lasted as long as it has is the band members’ shared outlook on life.

“There is only one philosophy that unifies us, which is being spiritually idealistic as students of the Chaitanya Mission,” he says. “Iisa lang ang pinaglalaban namin, ang iangat ang buhay ng tao (We have a common struggle—to uplift people’s lives) through spiritual solutions. The real goal in life is to serve God—that is the only thing that will bring us happiness. Punk is a medium through which we communicate this philosophy.”

Drummer Aji Adriano is the band’s archivist and historian, as well as the member most active in booking gigs. For the last several years, he has organized the band’s annual anniversary “Concert at the Park” gig.

The Wuds is not your typical band, he says. For one thing, the members have never relied on performing to make a living. (Adriano’s main gig these days is as a drum teacher.  He also plays with a Beatles tribute band called Steel Onion.)

“There was a time when we almost broke up,” he confesses. “Around ’91, ’92. But by the time ‘At Nakalimutan Ang Diyos’ came out, we came together again. We realized that this isn’t really for us, this is for the people. That’s what carried us through the last 30 years.”

A music major from the Philippine Normal University, Balingit has used The Wuds as a launch pad for his singular artistic vision, which is hard to describe in just a few paragraphs.

“It was (writer-poet) Krip Yuson who called me a ‘multidisciplinary artist,’” he says.

For the past few years, his main preoccupation has been the fulfilment of his artistic magnum opus, which is a seven-part novel that takes off from Rizal’s unfinished third novel, takes off on various tangents including the life of anti-American hero Macario Sakay, and into the present and possible future Philippines. Written entirely in baybayin, the ancient Tagalog script, it encompasses a reimagining of a mythical country of the mind, at least from what I gather from his description, since it remains unpublished.

Fragments of this work have been staged as theatrical performances that incorporate dance, poetry, music, theater and the visual arts, usually by Planeta ng Ngiti—Balingit’s exotic musical ensemble that performs progressive music, usually making use of instruments such as the zither and the koto, and sometimes an orchestra composed of Special Education children.

This artistic growth feeds back into The Wuds.

The Wuds still don’t rehearse, Balingit adds. They play whatever songs they remember, whenever they remember them. The playing becomes more spontaneous that way.

Looking back at The Wuds’ peak years, he says their music prefigured his current far-out avant garde experiments.

“Yung ‘Inosente Lang ang Nagtataka’ at ‘At Nakalimutan ang Diyos’—masyadong radical noong panahon na ’yon, punk rock tapos wala na lang chords—doon pala talaga papunta (They were too radical at that time—punk rock without chords. But little did we know that it was eventually what we’d end up with).” •