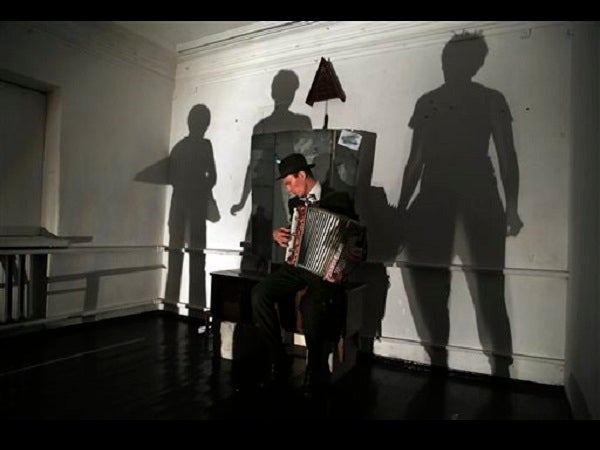 In this Tuesday, June 18, 2013 photo, an actor of the Free Theater perform during a rehearsal of " One's nearest and dearest " in Minsk, Belarus. Two emotions course through the audience at the Belarus Free Theater _ excitement at seeing an innovative production and fear that police will haul them away. The theater, in a cramped and tumbledown house in the capital, Minsk, is a rare crucible of dissent and experimentation in quasi-Soviet Belarus, taking on topics such as political dissent and homosexuality. (AP Photo/Sergei Grits)

MINSK, Belarus — Two emotions course through spectators at the Belarus Free Theater — excitement at watching avant-garde drama and fear that police will haul them away.

The theater, in a cramped and run-down house, is a rare crucible of dissent and experimentation in the country known as Europe’s last dictatorship, taking on topics such as political oppression and homosexuality.

Abroad, performing in such renowned settings as the Edinburgh Fringe festival in Scotland, the troupe has earned rave reviews and the support of theater luminaries such as Tom Stoppard, and the late Harold Pinter and Vaclav Havel. At home in the capital, Minsk, the theater suffers heavy fines and intimidating police visits, while its actors are blocked from work at the approved stages.

In the latest attempt to bully the 8-year-old company, a court recently fined the theater’s administrator for “improper use of the building.”

From the outside, the building appears barely usable for anything — a shabby little one-story structure with a dented and corroded metal roof, set amid unkempt vegetation. Inside, there’s space for only a few dozen spectators on cramped benches or sitting on the floor. The actors are almost within arm’s reach.

It is underground theater in the true sense of the word. Performances are advertised only by word of mouth. Its director and founders fled to London and communicate with the company in Minsk on Skype.

Police frequently raid the performances. Everyone found inside the theater is carted away in buses to police stations, where they are held for a few hours while their documents are checked. “The checking of documents of all the actors and all the audience is already the norm,” said Svetlana Sugako, the current administrator.

The theater now has a dozen productions in its repertoire. “Generation Jeans” is about the repression of young activists’ attempts at opposition. “Minsk 2011,” dealing with sexuality, won an Edinburgh Fringe prize “for innovation and outstanding new drama.”

Sometimes the police pressure is more than intimidation, as when the theater was showing the film “Europe’s Last Dictator,” about authoritarian President Alexander Lukashenko. About 10 minutes into the showing, “riot police broke in and put us all up against the wall, hands behind our head,” said actor Kirill Konstantinov. “Without explanation, they took us to the police station, put handcuffs on us.”

During the presidential election of 2010 and the mass arrests that followed, leaders of the theater were among those apprehended but they eventually managed to escape the country.

“Our theater is such an encyclopedia of repression,” director Vladimir Shcherban said from London. Over the eight years of the theater’s life, seven actors have fled Belarus under government pressure. Those who remain in the company are unable to find stable jobs as actors. Private lives are upended.

“Politics came into my personal life and crawled into bed with me,” said actress Yana Rusakevich, who was denied a position in the country’s main troupe, Theatre of Belarus, because of her work in the Free Theater.

Because of political pressure, “I had to part with my beloved,” she said. “We are no longer living together, because he could not return to Belarus and I came back.”

At the end of each performance, a donation box passes through the audience. For the actors, it’s is a hand-to-mouth existence, but they say there are bigger rewards.

“I am a free person, I have the right to express my opinion,” said Rusakevich. “And for that I was punished: I was arrested several times, detained.”

The authorities have barred entry to foreign actors and directors who want to work with the theater. The Belarusian Embassy in the Netherlands denied visas to 13 artists who had intended to fly to Minsk in August for internships in the Free Theater.

The Free Theater is also pushing boundaries with its latest production, “Merry Christmas, Miss Meadows …” — the true story of a British teacher who had a sex-change operation and committed suicide following intense media attention.

“Our basic credo is to talk about taboo topics,” said Shcherban. “We decided that each performance, each action, will be devoted to one of the taboo topics.”