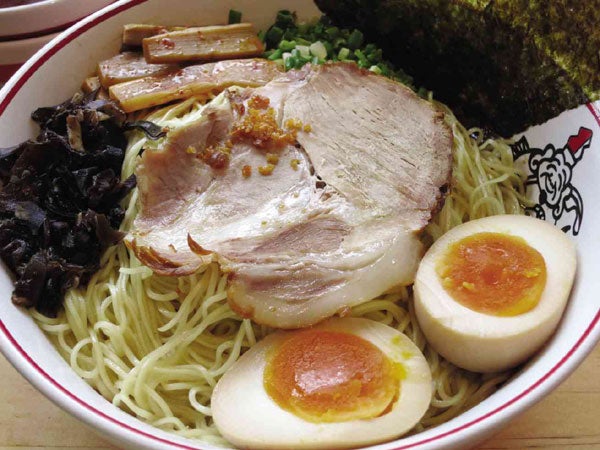 Fabulous eats in the East Wing

An underlying democracy seems to permeate the gilded corridors of Shangri-La Plaza’s new East Wing. For while luxury brands and high-end fashion stores seemingly define the place, there, too, are the nuts-and-bolt shops that answer more practical needs.

By dint of this, shoppers can buy kitchenware and Rolex watches, whimsical notebooks and Shu Uemura makeup, electronic gadgets and DKNY clothes. It’s as if the mall didn’t want to play favorites, and thereby allowed stores of various persuasions to set up shop in its plush surroundings.

It’s likewise with the restaurants. Whether you’re craving Japanese ramen or Italian pizza, Filipino sisig or American steaks, you’ll find them, in one level or another, in this latest shopping mecca.

Here, some restaurants to try:

Don’t be deceived by the homey look of its crispy binagoongan. A lot of work has gone into the preparation of this dish, from the bagoong carefully formulated to a controlled saltiness, to the pork that crackles with every bite, and thereby living true to the adjective that describes its name.

US-trained chef Trina Tiaoqui Imperial has tweaked this homegrown dish to its tastier, most texturized reincarnation, just as she has done with the other dishes that started out as heirloom recipes and emerged in the menu as their contemporary versions.

Rellenong alimasag, for instance, has morphed into crab balls; monggo soup has become more sosyal with the use of olive oil and the addition of Spanish chorizo. And for dessert, instead of ordinary tsokalate, it’s a cup of chocolate couverture simmered in a slow cooker, accented with milk and a dollop of butter. Very sosyal indeed, but thick and delicious.

While others may pride themselves in serving cuisine with a seal of authenticity, this  restaurant honestly admits that its fare is a confluence of Vietnamese and Filipino flavors.  The dishes, says operations manager Lito Cardines, are not very spicy, which they’ve deciphered is how Filipinos prefer their Vietnamese food.

On rainy days, the pho provides warm comfort with its steaming broth, noodles, and slivers of beef flank, brisket, meat balls and tendon.

The plates of appetizers served before a meal in Korean restaurants get a contemporary look in Woo Galbi. Instead of being presented on separate plates, the small bites of pickled carrots, zucchini, carrots, kimchi and dilis are parceled out in compartmentalized white dishes.

Indeed, the choices here range from the traditional to the modern. In addition to standard favorites such as bulgogi and japchae, there’s Korean-style mini tacos, beef belly wrapped in tortilla, and even mini burgers.

The beef stew galbi jjim is made with braised Angus short ribs; there’s a choice of Wagyu and Angus ribeye for grilling and platters of beef that include striploin, hanging tenders and short ribs. For all-in-one comfort food, nothing beats the bibimbap, a mixture of rice and assorted toppings served in sizzling hot stone bowls.

One feels very ladylike while dining in this tea salon and boutique, what with its immaculate white tablecloth and crisp table napkins, and an ambience made elegant by the hardwood posts, curved glass and brass panels, and an artful display of hand-painted artisanal tins.

And, of course, there is an exquisite collection of tea and tea blends, with such exotic names as Silver Moon and Red of Africa.

Lean but with a hint of fat, succulent with a smoky flavor, and a honey sauce to sweeten the inherent saltiness, the charbroiled slab of bacon looks like evil incarnate. If you’re able to resist this temptation, you’ll probably succumb to the desserts, which include banana cream pie on a Graham cracker crust, with layers of custard and whipped cream and a drizzle of caramel sauce on top, as well as the aptly named Triple Allegiance, a triple-layered mousse terrine of dark, white and milk chocolate.

The heart of the menu is the steaks, which are all of imported origin. Chef Jason Stacy says they do as little to the steaks as possible, since good meat doesn’t need much intervention.

“We put just enough salt to brighten it up,” he says. The steak is then broiled, which takes care of the caramelization.

Here’s your chance to try the schnitzel with noodles that Julie Andrews, as Maria von Trapp in “The Sound of Music,” includes among her favorite things. Billed as a Euro market café, Spätzle serves pork schnitzel on a bed of German egg noodles called spätzle, as well as other European classics such as roesti (Swiss potato pancakes) and schweinshaxe, crispy Bavarian pork knuckles.

A real enticer, however, is the blackboard by the entrance, which lists sinful desserts such as Nutella cheesecake and red velvet cake. There’s also sticky toffee pudding; you would do well to order one just for yourself (it’s so good you’ll finish it in a few bites).

Rich pork broth that had undergone a long simmering process makes the tonkotsu ramen in this place hearty and flavorful. The broth is rich enough to warrant a second round of noodles, which many customers ask for. To add to its authenticity, the thin long noodles are made with Japanese flour, while the ajitama, marinated soft boiled eggs, are of organic origin.

Toppings for the ramen include chashu, roast pork marinated and simmered in a dark seasoning called shoyu. That many Japanese customers bring their families to Ikkoryu on Sundays is indicative of the place’s cleanliness, great food and good service.

Customers who can read Japanese may want to take a closer look at the hand-painted characters made by a calligraphy expert. They tell stories of old Japanese folktales.

All restaurants mentioned above are located on the East Wing of Shangri-La Plaza, Edsa cor. Shaw Blvd., Mandaluyong City. For inquiries, call 3702500 loc. 579 or log on to www.shangrila-plaza.com.