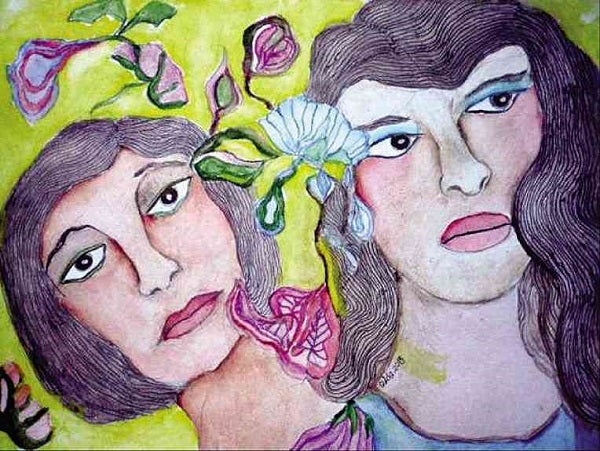 The Bahay-Na-Bato that we lived in during my childhood (1930-1943) was not the romantic and gracious queen of the antique books. Constructed in the late 1800s, by the time we got to live in it, the house was already shabby and old, with peeling paint. Someone said my grandfather on mama’s side had sold it to my daddy for a song when he married my mother.

A widower and late in years, my grandfather must have felt happy about bequeathing his youngest daughter, a Miss Batangas, no less, to a physician teaching at the University of the Philippines (UP) College of Medicine who had studied in Cambridge (England).  There was a 10-year gap between the sweethearts, but my cosmopolite papa looked eternally young. The first time the three broke bread in Baguio, the steak they had ordered was a bit tough. My Batangueño lolo took out a balisong from his pocket and gave it to my father. Here, this might help, he said.  It seemed like a veiled threat not to mess with his daughter.

Our address was 807 and 808 Escaldo, corner Barbosa, side streets beside the now seedy Times Theater in Quiapo.  The street names are very old.  Escaldo, Spanish for “burned,” was actually set on burned ground.  Barbosa was a contemporary of Ferdinand Magellan, probably an officer in his fleet.

Escaldo is an abbreviated street, having once been long enough to connect to the side entrance of Quiapo church.  It was a quiet street, but on Fridays, which was Black Nazarene day, Escaldo was lined with carretelas whose horses were feeding on bran and molasses from pails hung on their necks.  There was a lot of commerce around the church which, overnight, bloomed with makeshift stalls covered with gaily colored cloths.  They sold dry goods, slippers, medicinal herbs, bamboo and clay toys, and they disappeared the next morning.

People lined up to kiss or wipe the foot of the Nazarene, climbing up a tall staircase behind the altar.  My father was then into a physiological research for his book on the (first ever) height and weight of Filipinos.  He would place a weighing scale below the last step of the staircase to weigh and measure everybody who had kissed the Nazarene.  When they asked why, papa solemnly answered, “Utos ng pari.”

About 1937, the government, by right of public domain, bought off the land and demolished the houses on more than three-fourths of Escaldo to construct what is now Quezon Boulevard, and its bridge. (Quezon Bridge, by the way, took the place of the colgante, a hanging foot bridge whose wooden planks clattered when anyone walked on it).

Our house was technically a duplex, two units that looked like one whole house.  It had two entrances with their own numbers.  Each heavy door had a barrel bolt inside, a stone knocker shaped like a lady’s hand outside.  As such bahay(s) go, the ground floor was of stone, the upper floor of wood.  The windows on the ground floor were protected by great curving “pregnant” grilles painted bottle green.  Originally tiled, its roof, in my childhood, was already galvanized iron and covered with thick black soot.

The wide windows upstairs had double shutters-one of capiz shells to keep out the rain, the other of louvered wooden slats to shade it from the sun.  Both slid on grooves on window sills wide enough to seat a toddler watching a procession below.  Transoms under each window opened to let in the breeze.

In the dim ground floor was our garage.  Its stone floor was lined with piedra china (granite slabs once used as ballast for galleons).  The stone lined all the sidewalks of the city.  The garage sheltered our new black Plymouth that had replaced the “run-about” car of my father’s bachelorhood.

The house had six entresuelos (one-room “under-the-floor” apartments), four on our side of the “duplex” and two on the other.  We rented them out—one to our driver Oyong when he married Concha (P8), the other two to drivers who worked for the malaking bahay diagonally across ours.  Mang Andoy’s space was P10, Mang Serapio’s, (the big house’s chief driver who wore a cap) P12, since it had access to the street.  The other half of the “duplex” (806) was rented out to Maestrong Bonifacio Abdon, a composer and violin teacher.  His pupils daily punished our ears with squeaky renditions of “Humoresque.”  The entresuelos on Maestro Abdon’s side were occupied by his pale wife and several pale children.

Wide but not grand

Our staircase was wide but not grand.  It was flanked by turned-wood balustrades.  It led to an ante-sala in which were two slim rocking chairs on either side of an oval table.  On the wall above them was a regulator clock that chimed the hour and the half-hour.

Every Friday, a Chinese ropa (cloth) vendor, and occasionally a Bumbay, was allowed into the ante-sala, where he sat on the floor to display his wares. Bolts of shantung and pretty silks, brocade, Swiss cotton, perlin, silk pajamas and Chinese slippers. The Chinaman punctuated his every sentence with “Bonito, barato!” (Beautiful, cheap!”) and my mama always bought something.

Mornings, our golden yellow canary (a bachelor) sang its heart out in its romantic stand-alone birdcage.  It lived a good six years more just on cracked rice (binlid) and a daily lettuce leaf during the Japanese Occupation when imported bird seed ran out. Our wall telephone was attached to a post near the window.  You had to turn the dial with your forefinger and listen to the receiver at the end of a soft cord.  Our telephone number was 2-71-61.

Each room—the sala, the dining room, the two bedrooms, the bathroom and the toilet—was an individual unit that had its own door.  The big doors of the sala were always open. A trio of lace curtains with a peacock in the center of each separated it from the ante-sala. On either side of the door were large conch shells from Cebu, a favorite décor item of the ’30s.

The narra floorboards of our sala were slightly warped. There was a tiny hole on the floor through which you could peep to see who was knocking at the front door.  If okay, you pulled up the string (connected to it) which lifted the bar lock below.