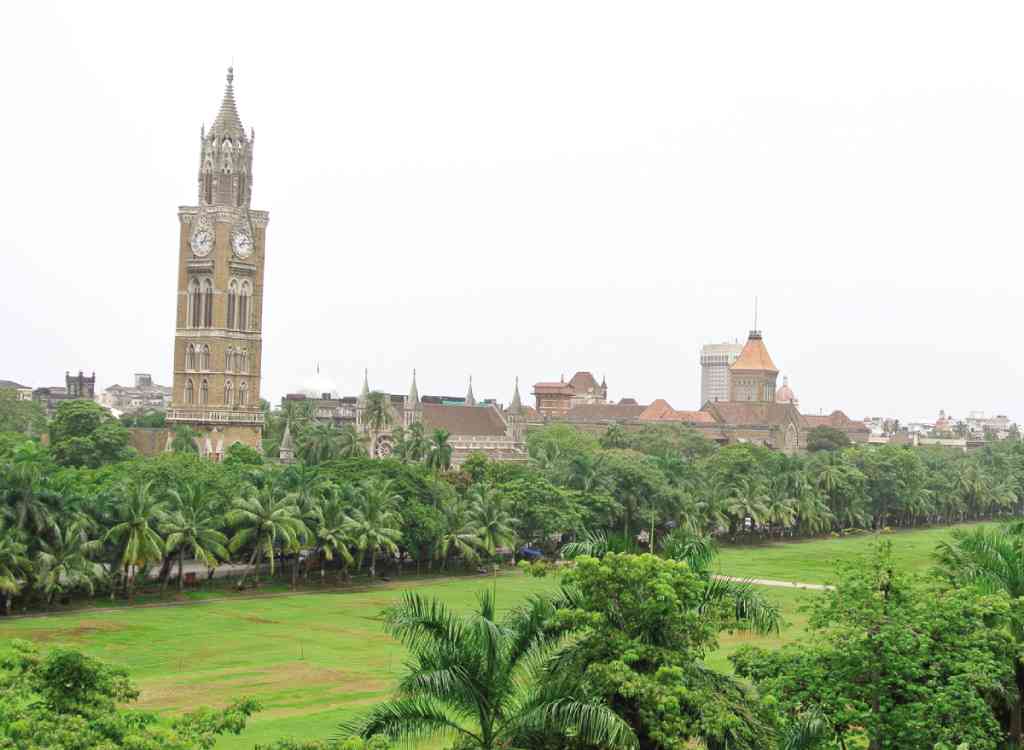 AN IMPERIAL ensemble of Victorian Gothic buildings line one side of Mumbai’s Oval Maidan.

Mumbai is a city layered with diverse urban textures, each one more extreme than the last. It is a complex environment of opposites.

Hostile but friendly, Mumbai is a place that bullies its residents while embracing humankind at the same time; a city of surprises where visitors never quite know what to expect.

Unexpected is the discovery of the Oval Maidan, the largest open space in the city used as parade grounds, cricket field, and recreational grounds, a vast green space dating to the mid-19th century that provides much-needed breathing space to the crowded center of old Mumbai.

On one side of the Oval Maidan stands an outstanding row of Victorian Gothic structures reminiscent of Bombay’s (as Mumbai was known then) position as the preeminent city of the British Empire next to London.

Directly across the green, opposite the row of Victorian Gothic structures, stands an equally outstanding row of Art Deco structures built a generation later.

Mumbai is probably the only city where large groups of buildings in diverging architectural styles clash within a relatively small area. But instead of being a jarring experience, the divergent styles create a unique urban dialogue that speaks of urban development happening within two distinct eras of present Mumbai’s history, an architectural dialogue unique to Mumbai not seen in other cities in the world.

Since pre-British days, Mumbai has always been a bustling port city of trade and commerce, the historic exchange point for goods and ideas from Europe to India.

Having been the subcontinent’s business and financial capital since colonial days, Mumbai developed into a cosmopolitan and global city where the latest influences from the West funneled into the rest of India.

In keeping with Mumbai as the Indian point of confluence for East-West exchange, all structures built during the colonial era were designed in Victorian Gothic, the signature style of progressive 19th-century England. Therefore, the entire row of buildings flanking the eastern side of the Oval Maidan were constructed in the Victorian Gothic style of the moment.

The buildings reflected the highest architectural and technological advancements of the mid-19th century, constructed using the revolutionary cast-iron technology developed by Victorian engineers. So advanced was the technology that some building components still unavailable in India were cast in England and shipped to Bombay.

Cast-iron structural components from England were incorporated into buildings constructed by Indian hands with Indian ingenuity. What appeared to be Victorian architecture was actually built by masons of local stone whose textures and colors are found only in India.

Decorative sculpture incorporated traditional Indian forms. Because the buildings were in the tropics, verandahs were added and windows enlarged to allow for cross-ventilation.

The result was a group of buildings that fused two cultures, architecture that evoked the imperial Victorian Gothic style whose soul was totally Indian.

Almost a century later, the sea at the opposite edge of the Oval Maidan was reclaimed, and on the former western shoreline rose another impressive row of buildings.

Like the Victorian Gothic buildings on the eastern edge of the Oval Maidan designed in the latest style and revolutionary technology of their era, all of the new buildings across the Maidan were designed in the Art Deco style sweeping Europe in the 1920s.

Introduced to India at the same time as Art Deco, reinforced concrete was the technological innovation of the day, which allowed simpler and faster construction methods, the use of standardized building components, and the technology allowed for construction of taller buildings.

Concrete, a plastic building material, easily lent itself to the laying out of taut, streamlined curved surfaces that characterize the global Art Deco style whether in Europe or Bombay.

The next generation of Indian sculptors produced stunning sculptures, reliefs and friezes, and decorative elements that were incorporated into the architecture, once again mining Indian tradition for motifs that were carried out in the Art Deco sensibility. Appearing Art Deco in style, the architecture is truly Indian in spirit.

The architecture at the Oval Maidan, whether Victorian Gothic or Art Deco, is a visual record of how Mumbai, as the East-West confluence point for India, adapted Western influences into Indian culture and reality.

Although constructed a century apart, both groups of structures began with a Western design premise and proceeded to adapt it to suit Indian materials, environment, and culture, ultimately producing a distinctive variant of the Victorian Gothic and Art Deco that is unique to India, an example of shared heritage at its best.

Feedback is cordially invited at www.villalonarchitects.com.