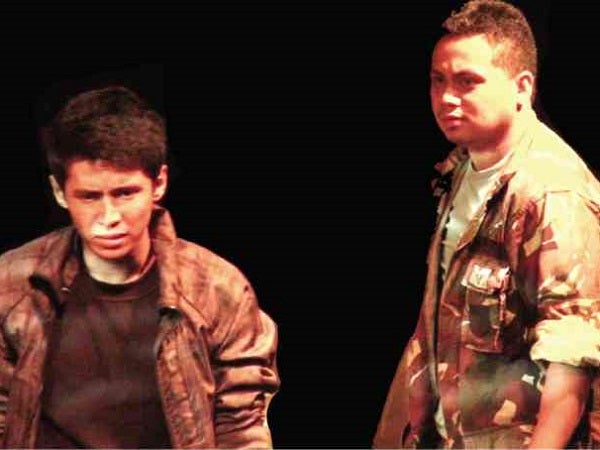 “BANUA” by Sheryl Sumugat, directed by Blesy Sese, about NPA cadres shaken by distrust and treachery in their ranks

Playwrights and directors are the hubs of a robust theater practice. As the cores of theater, they ensure production, because creation starts from them.

The dearth of playwrights and directors in Mindanao is quite a challenge; we would not be able to sustain theater in our part of the world without these necessary cogs. While Philippine theater as a whole brims with actors, singers and musicians, the practice produces relatively few writers who could provide the creative font, and directors who could morph text to performance, especially in Mindanao.

Thus, we’ve established programs to hone playwriting, in tandem with directing, to ensure that Mindanao theater continues to thrive. Currently in place is the Mindanao Directing Workshop, where apprentices create productions from scripts coming out of the Iligan National Writers Workshop (INWW) and Sulat Dula, Mindanao’s biennial playwriting workshop.

In that convergence called the Theater where the whole turns out to be greater than its parts, strengthening the hub smoothens and speeds up the cogs of production. As every effort emanates from the hub—the source of the collaborative synergy—playwriting’s vital role, without which there will be no production, needs to be underlined and supported.

Our playwriting program guides a play from text to rewrites to performance, with an apprenticing director and team engaged throughout. Unique in this process of twin programs is the integration of aesthetics borne from the Mindanao context. In the ensuing production, the local audience is already a vital part of the whole configuration.

The final work is produced in IPAG’s “In-Lab” program, the venue for new original plays.

The INWW (recognized as a major writing laboratory, being one of the first three national workshops in the country) does not only offer fellowships to writers of varied genres writing in the regional languages, but also includes slots for playwrights who compete with awards along with poets and fictionists. This workshop eventually selects winning plays for production.

Sulat Dula, a beginner’s writing laboratory hosted by XU’s Center for Culture and the Arts, offers 10 fellowships to budding playwrights from Mindanao. The program, the pedagogy of which I developed and which is managed by theater animateur Hobart Savior, has engaged the expertise of established playwrights Rody Vera, Glenn Sevilla Mas, Nicolas Pichay, Al Santos and the homegrown Ametta Suarez-Taguchi.

Plays in these writer’s laboratories are worked out in the parallel directing Program, an intensive 60-hour certificate course that has graduated its first batch of 16 fellows coming from all parts of the island. The workshop trains directors in theory and practical skills, covering such varied subjects as visual composition, production management and the principles espoused by the icons of Western and Asian theaters.

These workshops have institutionalized partnerships with the National Commission for Culture and the Arts through its national committees on Dramatic Arts, Literature and Cultural Education. Notable playwrights who have been fellows of the Iligan workshop include John Iremil Teodoro, Jose Dennis Teodosio, Edward Perez, German Gervacio, and Mas.

Recent plays that passed through the scrutiny of panelists and have been showcased in festivals include “Chipline” by Dominique La Victoria and “Streetlight Manifesto” by Mixkaela Villalon, both eventual entries to the annual play festival Virgin Labfest at CCP. “Streetlight” was also read at the Lark Play Development Center’s Hotink Festival in New York.

This season, we produced two one-act plays from the Iligan workshop, both winners of the JY Balacuit Award—named after the late Dr. Jimmy Balacuit, who was a staunch supporter of the workshop.

The plays were “Banua” by Sheryl Sumugat, and “Makahiya” by Bonifacio Alfonso Javier III. They premiered with debuting directors Blesy Cece and John Michael Lagura, graduates of the directing Workshop.

Titled “Bilugan,” a reference to the Filipino belief of fate juggling fortune and bad luck in cyclical patterns, the twinbill of plays narrated the stories of the rebel movement’s squabbles, and the Philippine prison system where prisoners are released to assassinate important persons.

Sumugat’s “Banua,” set in the mountains of Bukidnon, pitted NPA cadres against each other in an atmosphere of distrust and treachery. The scenario threw us back to those years in the ’80s when the movement purged its own ranks of suspected spies.

The play went through many rewrites after it was first conceptualized in a stagecraft class, and underwent further enhancements when the playwright was accepted as a fellow, until the text reached its present form as the basis for a full-fledged production.

Javier’s “Makahiya” went through the same route, starting out as a requirement for a creative writing class at the UP, then accepted for a fellowship to the INWW, before becoming ready for staging. Set in a maximum-security prison, the play—“localized” with Cebuano accents, indigenous images and all—was about a young man’s wish to get even with the killer of his grandparents through the most unconventional way, by getting inside prison.

Without such creative sources as the writer and director, theater declines and audiences diminish. Theater needs to incite the interest these materials in production can generate, to draw in and increase audiences. In all these efforts, the playwright is central and necessary, its position inherent to the survival of theater. Directors are the follow-ups.

It is our hope that in Mindanao, we have helped plot the directions that can assure our region of  a theater scene that lives for a long, long time.

The 3rd Sulat Dula, to be conducted in the first week of October in Cagayan de Oro, is now open for entries. The Mindanao Directing Workshop in Iligan will have its second intensive phase in the summer of 2014. The Iligan National Writers Workshop completed its 20th edition last May and will again accept entries for fellowship in early 2014. Steven Patrick C. Fernandez, Contributor