Why FOB is not just another pop-punk cliché | Inquirer Lifestyle 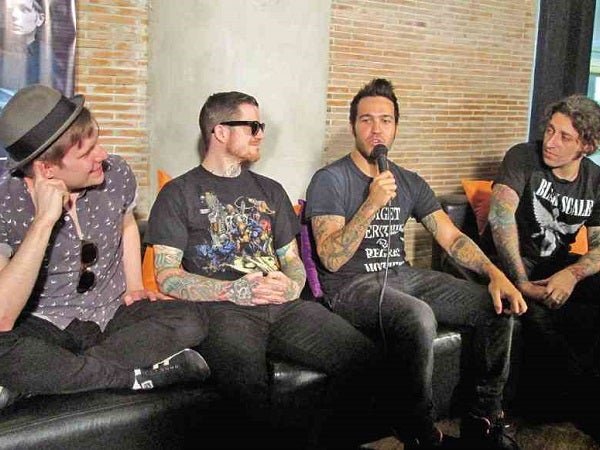 MEET the men of Fall Out Boy. Vocalist Patrick Stump, drummer Andy Hurley, bassist Pete Wentz and guitarist Joe Trohman sat down with members of the press for a quick interview session at TriNoma last Aug. 8. This Manila leg of the “Save Rock and Roll” tour marks the band’s third concert in the country. ANGELA IGNACIO/CONTRIBUTOR

Why FOB is not just another pop-punk cliché

When Fall Out Boy went on an “indefinite hiatus” in 2009, just months after its second Manila show, fans thought they’d seen the last of the group.

Four years and several solo projects later, the fully recharged band finds itself back in the country for its third concert in six years, armed with a fresh arsenal of fist-pumping anthems.

Running on a tight schedule a few hours before its concert at Smart Araneta Coliseum, vocalist Patrick Stump, bassist Pete Wentz, guitarist Joe Trohman and drummer Andy Hurley first had a series of media interviews inside TriNoma’s Mango Tree Bistro. Then they went down to say hello to  screaming fans—some of whom were still wearing school uniforms—for a meet-and-greet/CD-signing session at the mall’s activity center.

“We were doing it for eight years without a break, and we were so deep in it that [we didn’t] have enough time to reflect and realize how excellent everything was,” Trohman said.

Each band member went off to find his own creative outlet: Stump went the R&B route with his “Soul Punk” and “Truant Wave” albums; Trohman and Hurley played in their hardcore metal supergroup The Damned Things; and Wentz pursued several interests from being a DJ to trying the retail business to engaging in music and film production.

The guys also found time to focus on their personal lives. Stump married his longtime girlfriend, whose grandmother was incidentally born in Manila. He animatedly recounted how they had a blast rediscovering her Filipino roots during the band’s 2009 tour. “It’s funny because none in her family speak any Tagalog… But all the food that survived is Filipino,” he said, chuckling. “We had adobo and lumpia at our wedding, you know.”

Apparently the break worked wonders for them. “Save Rock and Roll,” the band’s fifth studio album (and second No. 1 record to date), throbs with genre-bending music that sees Fall Out Boy blending mosh pit anthems with dance-floor gems.

“When we made that album, we had zero expectation. We made it in complete secrecy, and we were only thinking of the music we wanted to make,” Wentz said.

The band’s musical growth— “from Fall Out Boys to Fall Out Men,” as Wentz jokingly put it—is evident beneath the addictive beats and LSS-inducing melodies. The album boasts a sleeker, more cohesive sound, the lyrics less snarky and more palatable, making all 11 tracks fit for commercial consumption.

The hiatus has also helped the members learn to talk to each other again. “A lot of times, all of us would be secretly angry at each other, so the ways that we would work together weren’t very constructive and cool,” Stump admitted. “For example, Pete wrote the lyrics and I wrote the music, and the way that it really happened was we didn’t want to discuss it with each other. ‘Fine, you do that, I do this, and shut up, you know?’ That didn’t really work for us, and that didn’t leave any space for Joe, who writes a lot, too. So, this time out, we made it a lot more communal and open.”

“Wait, you didn’t want to talk to me?” Wentz said in a sulking manner, amid laughter.

“It’s more about being more comfortable with ourselves and our abilities in different ways,” agreed Trohman.

Fans seem to be satisfied with the band’s newfound maturity. In fact, the boys have gained a bunch of new (and younger) followers along the way.

“In making the new album, we really wanted to make something that people would be able to embrace,” added Wentz. “We have fans who were 15 when we started out and are 25 or 26 now, so we wanted to make music that would make sense for both them and [high school] kids who are going through the same thing.”

As tongue-in-cheek as its new album’s title sounds, “Save Rock and Roll” might have, at the very least, saved the band from becoming just another pop-punk cliché from the not-too-distant past.

“I think we’ve always wanted to try new things. It wouldn’t have been very Fall Out Boy to do the same thing, so that was kind of important going back,” mused Stump. “Going forward, that’s probably how we’ll do it, like our next record won’t sound like this record or the one before it.”

“Nobody was expecting a new Fall Out Boy record in 2013,” Wentz said, “much less a record that would go to No.  1 or that people would react to or that would be played on the radio. So it’s improbable.

“It’s like the loser on the side of the classroom saying, ‘One day, I’m gonna rule the world!’ And look, he f…ing did,” he declared, as the rest of the band smiled. Angela V. Ignacio