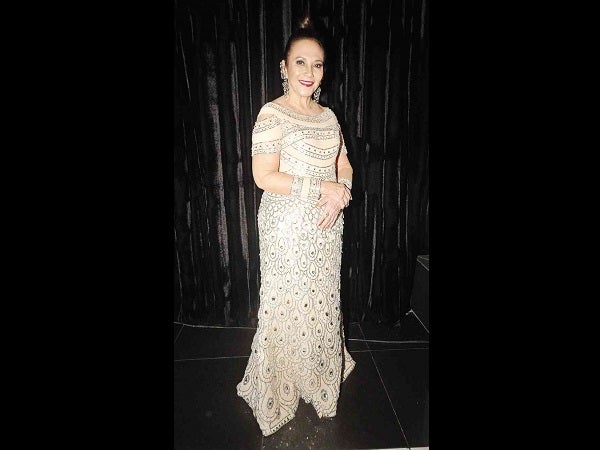 Mellie Ablaza, one of Manila’s most glamorous and gracious hostesses, celebrated her husband Louie Ablaza’s 75th birthday with an elegant James Bond-theme ball at the NBC Tent recently.

Since Mellie is also honorary consul of Guatemala to the Philippines, the affair was attended by the country’s diplomatic community along with Manila’s 400.

Son Jun-Jun, the über talented events planner, took the cue from the much-coveted invitations that consisted of a flawless diamond-cut crystal paperweight with the recipient’s name etched for posterity, and packed in a black and silver box.

Guests took the espionage and action-adventure clue to heart. Men arrived in sleek black tie tuxedos while beautiful women sashayed in slinky serpentinas wearing the most dazzling jewelry. Diamonds are forever and so are rubies, blue sapphires and emeralds.

Guests know the Ablazas throw the best parties in town, so everyone was giddy with excitement in the cocktail area. Champagne flowed. Guests feasted on the best Parma ham, cheeses and canapés and a string quartet serenaded them amid fabulous ice sculptures.

The entrance to the ballroom was faceted like a diamond, ushering in the guests. Inside, they found the ballroom draped entirely in white jersey glowing amid the fantastic laser lights.

Long rectangular tables instead of the usual round ones made it easier to have spontaneous conversation. Meanwhile, guests table-hopped while others made grand entrances.

A diamond design-shaped spaceship hovered overhead. The minimalist theme meant no flowers to compete with the most beautiful ladies’ coiffures to high heavens and wearing long gowns. Instead, on the tables were strings of Swarovski crystals that danced like raindrops as centerpieces.

Onstage, the magnificent Manila Symphony Orchestra began the celebration by playing the famous movie themes of many “James Bond” movies, such as “Diamonds are Forever,” “Goldfinger,” “From Russia with Love,” “You Only Live Twice” and “Live and Let Die.”

The Philippine Ballet Theater did a skillful dance interpretation of the “James Bond” soundtrack that bewitched the audience.

The dinner got everybody ready for a most heartwarming program emceed by the debonair Johnny Litton.

But the highlight of the evening’s entertainment was the special numbers by the Ablaza grandchildren.

Marc Ablaza’s sons, Xavi and Santi, did a song and piano number while Jofe and Czarina Syquia’s children, Alfonso, Agu, Azi, Amanu, started out with a special violin ensemble, followed by a solo violin and song number by four-year-old Azia, who received a standing ovation.

The five-tiered white silver birthday cake was cut by the celebrator. In his speech, Louie Ablaza extolled his family’s solid bond of love, tradition and devotion.

Then the 88.8 band got everyone on the dance floor, tripping the light fantastic on a lit plexiglass stage till the wee hours.

I love all the fantabulous balls that this generous family has staged some years back, yet Louie’s 75th birthday bash might emerge as the most memorable because it was simple and straightforward and so chic. It would be in my mind forever, just like a diamond ablaze.