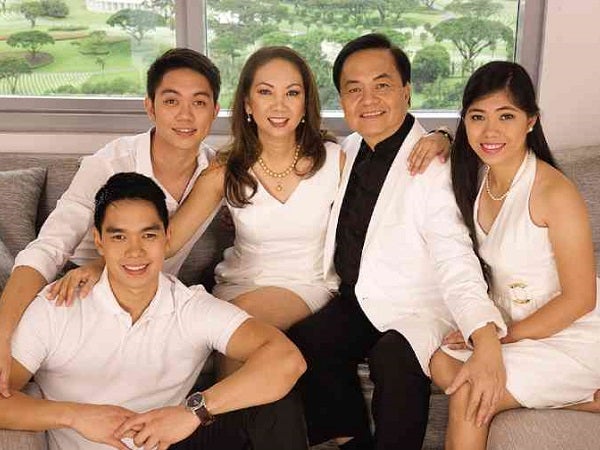 With his wife Anna and children Gabriel, Rafael and Mica

Businessman Chito Sobrepeña’s commitment to civic and social development work started in 1969, when he entered the Ateneo de Manila University as a freshman. That year he was quickly recruited as an active volunteer of the peasant movement.

“I grew up in the rural community of San José in Nueva Ecija. Even if I came from a land-owning family, I was familiar with farmers and their plight since we would interact with them even in high school,” he told Inquirer Lifestyle.

Sobrepeña identified with the farmers’ philosophy of “land to the tiller,” and would end up marching for their rights at rallies held during the First Quarter Storm in 1970. By the time he graduated in 1973, Martial Law had been declared and some of his batchmates had taken up arms and joined the underground movement.

Instead of doing the same, he joined the government because, he said, “At the time I believed in Marcos who said, ‘You activists, you’re fighting in the streets. If you want to reform society, join me.’”

A handful of activists from UP, La Salle, Ateneo, UST, Pamantasan ng Lungsod ng Maynila heeded Marcos’ call and joined the Neda (National Economic and Development Authority) where they started out as research assistants.

Early on, he volunteered for an assignment in what were the poorest provinces at the time, Leyte and Samar. The two-year experience allowed him to work closely with the underprivileged.

“Being there at the grassroots level helped in my work at Neda because we were able to come up with projects to benefit communities and consequently contribute to the country’s economic development,” he said.

Sobrepeña rose from the ranks to become the director of Policy Coordination Staff in 1982. In 1987, he was recruited by then President Corazon Aquino. Three years later, he was appointed Cabinet Secretary—the youngest member, at 36, of her Cabinet.

Sobrepeña was put in charge of administering the President’s Social Fund (PSF), a $1-million-per-month facility of Malacañang that supported small infrastructure and livelihood projects of nongovernment organizations (NGOs) and people’s organizations.

“Mrs. Aquino had three priority thrusts: schoolhouses, water wells and livelihood, so we focused on those,” Sobrepeña said.

In 1995, after over 20 years of government service, he embarked on a second career with the private sector, this time at Metrobank Foundation Inc. (MBFI). He has been its president for seven years now.

Sobrepeña shares the sense of civic duty of Metrobank Group chair and founder Dr. George S.K. Ty, who had said that “giving back to society has always been my ideal.” As president of MBFI, Sobrepeña and the staff at the foundation champion “the pillars of society,” starting with teachers and artists in 1995.

Under Sobrepeña’s guidance, the list of recipients has since been expanded to support key sectors such as healthcare, the judiciary, police and military. The foundation also has its grant-giving initiatives that support various socio-civic and charitable institutions in the country and the regions.

“Mr. Ty told us we needed to help build strong pillars of our nation. Since we were already recognizing and awarding outstanding teachers, I said I would like to help the security sector. We were able to get Mr. Ty to provide endowment funds for these projects. That’s why MBFI now recognizes and awards outstanding police officers and soldiers.”

Despite the expanded reach of the foundation, it is still more popularly known as an entity that recognizes artistic excellence.

“Mr. Ty is a collector of Philippine and Chinese art. He probably has the largest private collection of Chinese art outside mainland China. This inclination to collect art led to the creation of the first Metrobank painting competition in 1984,” Sobrepeña said.

Since there is no annual theme and artists aged 18 to 35 could join, the arts competition captured the sentiments of the young and the times they lived in.

“If you look at all the winning paintings since 1984, you will see a veritable social history of the country. There are paintings depicting the eruption of Mt. Pinatubo, the advent of cell phones, the deadly earthquakes, and of OFWs returning in their coffins. These collected paintings reflect the soul of the nation,” he said. “That—to us—is our contribution to nation-building.”

In 2004, the foundation recognized sculpture, architecture and interior design. With the change came the competition’s new name: Metrobank Art and Design Excellence (MADE).

A museum featuring a revolving exhibit of winning pieces is being planned at the Six Senses Resort by developer Federal Land near the SM Mall of Asia.

Sobrepeña celebrated his 60th birthday last June but shows no signs of slowing down. “We recently revived the search for Journalists of the Year (JOY). We used to have it 12 years ago; it has since been reformatted.”

Closer to home, he and his wife, Anna, editor in chief of Lifestyle Asia, are very active in the Catholic covenant community Ligaya ng Panginoon.

“We help married couples improve their communication and periodically give intimacy workshops,” he said.

The Sobrepeña couple have three adult children, but it is only their daughter Michaela who has shown an interest in following in her father’s footsteps.

“My daughter took up Development Studies at the Ateneo and looks forward to working in an NGO,” said Sobrepeña.

The university’s Development Studies program provides systematic, multidisciplinary formation for those who want to make effective contributions to the continuing effort to improve Philippine society.

“She’s the one who took after me,” said the proud father.