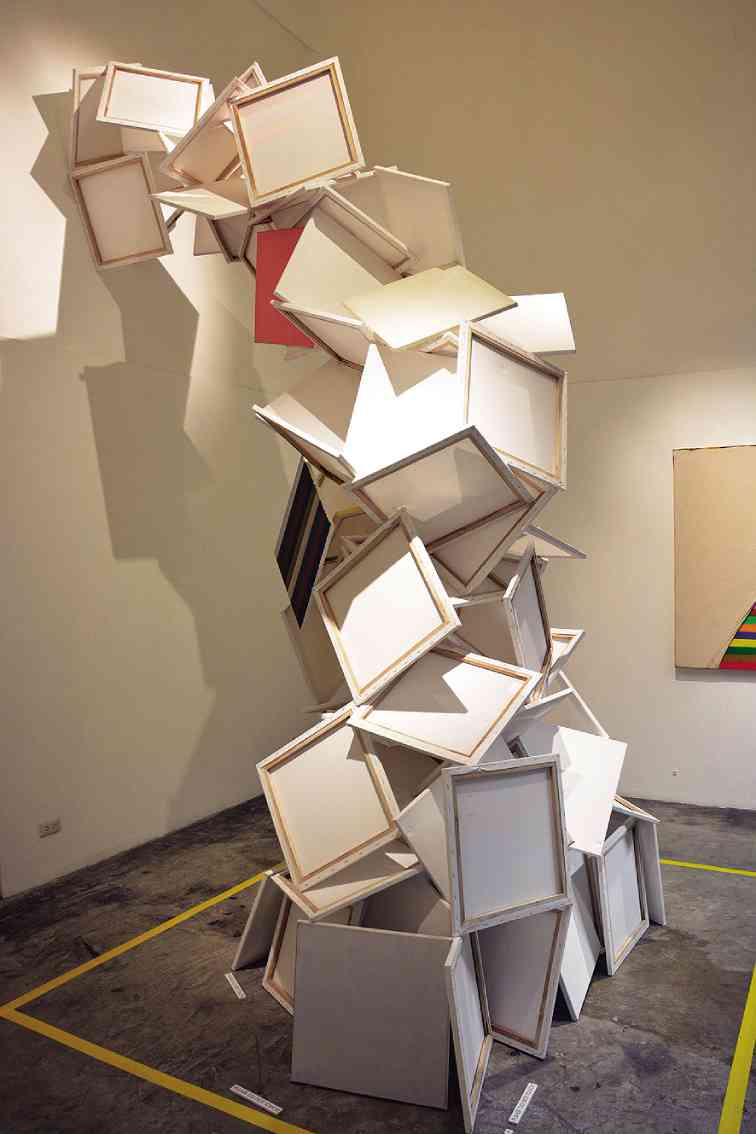 He would tear, pierce, cut and almost destroy his paintings not out of rage or protest, but because, he thinks art is all in the mind.

He is simply probing things, and in the course of his artistic queries and explorations, he comes up with a collection of works that delve into the myths and notions that influence and shape the perception of art.

Lindslee’s (Lindsley James Lee, b. 1979) latest exhibition, “It’s All in the Mind,” is about art—here symbolized by the painting as object. The show is an experience that virtually disengages the viewer from the usual expectations of what an art exhibition is all about; where normally, carefully constructed art objects are displayed.

The concept behind “It’s All in the Mind” is a product of two significant experiences in the life of the artist: his 2001 visit to one of the world’s art capitals, New York City, that greatly impressed him and opened his mind to endless artistic possibilities; and the shock of 2009’s Tropical Storm “Ondoy” that submerged in mud his favorite personal works he had been collecting the past three years.

The destruction of his treasured paintings prompted a series of questions that finally led to the idea that painting is an object and not necessarily art, and that art lies beyond all ordinary notions assigned to it.

Thus began a series of  multi-layered processes that developed from the creation of paintings to their destruction and their final assemblage.

The artist would paint his usual abstract works and then destroy them either by slicing, cutting or tearing, or changing their form by rolling up the canvas, inverting it, dissecting it to reveal the wooden frames, or piling up multiple canvases—all in an attempt to probe the question “What if I destroy, tear, roll or reverse the painting?  Is this still art?”

One such work is “Stuck in Reverse,” an inverted canvas revealing its frame and mounted on a fancy molding that alludes to artworks that are essentially empty and soulless but still regarded by some as art simply because they are  framed.

“High with Art,”   made up of multiple canvases that rise   from floor to ceiling, is a literal interpretation of how art can bring about a sense of elation.

The idea of perception plays a large role in this collection, such as the work  “Ignorant Critic 2013,” where we find a taxidermied goat attempting to eat the realistic painting of a field of grass. The work that editorializes how paintings are interpreted is reminiscent of Robert Rauschenberg’s 1955-59 mixed-media work  “Monogram,” which utilized a taxidermied goat.

Also present in the show is a stuffed turkey that perches on a rolled-up painting on canvas.

The show exhibits Lindslee’s artistic development, as a continuing process that reads like the history of art—from his early realist works as a student at the University of Sto. Tomas College of Fine Arts and Design, to figurative abstractions  that led to nonfigurative paintings which later developed into mixed-media, and now to the more sublime installation works that delve into the Conceptual.

“It’s All in the Mind” reveals the artist’s multilayered creative process that also exhibits his interdisciplinary abilities in the fields of Realism, Abstraction and the Conceptual.

We are also made aware that sometimes artists need to be jolted from their comfort zones to propel their creative pursuits toward unchartered territories that will allow them to artistically develop.

The sudden attack of “Ondoy” and the artist’s cultural break that shook his sensibilities have dramatically shifted his art away from the meditative aspects of abstraction into the more daring and risky esoteric realm of Conceptual Art.