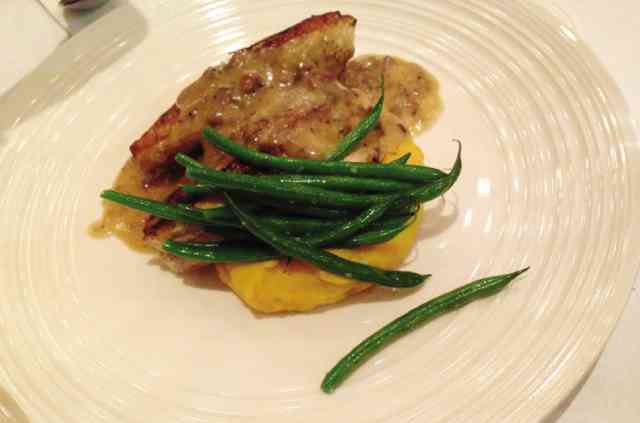 Satisfying experience in a gastropub

There are some days when it just all goes terribly wrong. Whisking the kid to and from school, picking up a cake for a birthday, and going to the doctor seem like chores that should be manageable in an average afternoon; but if you throw in number coding, traffic and delayed texts, then it becomes as complicated and exhausting as attempting to ferry a fox, a goose, a pig, a baby and a sack of corn across a river with a boat that has sprung a leak.

It was thus that I found myself sitting glumly on the steps of St. Luke’s Global, with all my metaphorical animals drowned and at the bottom of the river, waiting for my wife to pick me up (I had taken a taxi there). I noted that we were just across The Hungry Hound, which had just opened and which we had made a mental note to try. The day seemed to have no other way to go but up, so we decided to have dinner there.

The restaurant is at Globe Tower, the construction of which I’m certain I have contributed a fairly substantial amount to in the form of my roaming bill last year. Or rather, as they (The Hungry Hound, not Globe) describe themselves, not so much a restaurant as a gastropub connected to a bar. I used to dislike the term gastropub because it sounded pretentious, like a pub that had put on airs, but I eventually came to understand it as the British equivalent of a bistro, something a little more than a corner pub with its puddles of puke and pee and a darts game in the corner, and a poncy starched-linen restaurant. They just don’t want to call it a bistro because they’re like that, the way they call French cuffs “double cuffs” because of sheer obstinacy.

We desperately need restaurants of this level of formality, or informality; with good, simple food to match. The most fun eating I’ve done in France has been in bistros, especially those outside of Paris. I wish I could say the same of gastropubs in London, but the best eating there is really at ethnic watering-holes. The only good thing about gastropubs was that sometimes we could bring our dog, which, despite its name, you can’t do at The Hungry Hound.

The place has so much going for it that they would have to try very hard to mess it up. It’s wonderfully located, just opposite the hospital, so that right after your physical you can cross to the drugstore, load up on cholesterol maintenance meds, and dive straight into the steaks.

The interiors are acoustically fairly inert, despite the high ceiling, and is just the right mix of majestic and cozy. And Erwan Heussaff being in charge of the bar area next door brings a sprinkle of glamour and good-looking people into the mix.

The food is mainly by Rob Pengson, who is a friend and someone I’ve worked with. That disclaimer in place, may I add that I have enough respect for my friends to give them the courtesy of being honest—I can then report that, well, the food is already excellent despite the rushed opening. There is a paleo lilt to some of the dishes on the menu, such as the roast chicken I had but this shouldn’t worry anyone unduly: it isn’t diet food and it definitely doesn’t taste like caveman food.

Rob was wringing his hands and looking uncharacteristically flustered, muttering under his breath about the oven not being right, the sous-vide being on the blink. The menu is indeed truncated, and on the truncated menu there were a few items not available, which were pointed out to us before we ordered.

But what did arrive was very good indeed, which brings me back to a conversation I had with another food writer that Rob’s food is better when he limits his use of the “molecular” toys: the technological innovations that for a while divided the food world  into modernists and classicists.

The latest menu I had at The Goose Station, Rob’s other restaurant, was much more organic, more natural and spontaneous, than the earlier incarnations, and at The Hungry Hound, whether due to self-imposed limitations (the steaks will always be grilled the traditional way, even when the sous-vide is at maximum capacity) or things not yet being quite bolted down in the kitchen, the food is straightforward and unassumingly well-executed.

I’ve seen shiny kitchens, with millions of pesos invested in the latest equipment, that manage to make horribly, horribly mediocre food. Conversely, I’ve seen good teams set to work in adverse conditions yet make the most of it.

I can’t wait to see what this kitchen and team will turn out when all engines are in full capacity.

I would advise, though, that unless you’re the sort of person who must go to a restaurant immediately when it opens, for the bragging rights, you must let about a week or two pass before descending on the restaurant in great droves: there will be more to choose from and the annoying Instagrammers will have dissipated.