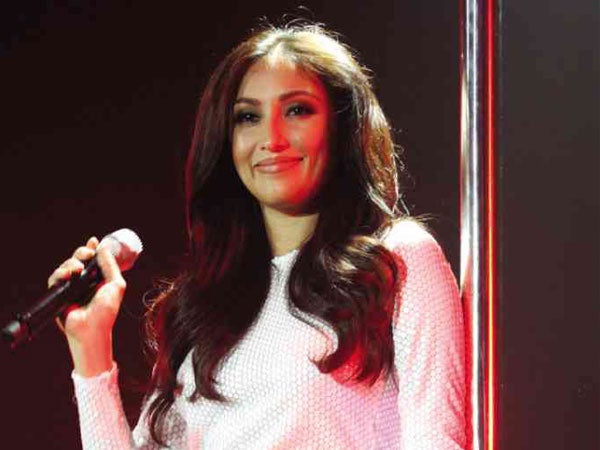 Solenn: Don’t call me ‘It’ Girl

When the velvet curtains parted and the seductive strains of a song popularized by French singer Patricia Kaas filled the room, it was the chanteuse Solenn Heussaff—not her actress or fashion model persona—that appeared on the dais. She was in a slinky silver dress, leaning against the stripper pole at the center, her dark, long tresses a sexy tumble on her slender shoulders.

Heussaff is a singer with an album to her name, and another about to hit record stores. That ability in her impressive list of talents is what the French-Filipino chose to highlight that evening, as Bench welcomed her into its fold as the newest Bench Body siren.

She cooed the lyrics of “Mon mec a moi” (“This Guy of Mine”) in her father’s Gallic tongue to a roomful of media, the Bench family, and guests who included her parents.

For the event, the Bench Tower’s Playground was transformed into an intimate cabaret-saloon. The song choice was meaningful for Heussaff and Bench: It was the  song she sang when she first met Bench founder Ben Chan years ago.

Chan recalled it was on Georgina Wilson’s birthday when he first heard Heussaff sing. He was hosting the birthday dinner in his home. Wilson, a Bench endorser, is a close friend of Heussaff, who, at the time, was still just modeling.

“We were impressed,” said Chan, who avidly took photos of his new talent. “But we couldn’t sign her up because she was still under contract with another brand. We waited for another

six months, when her contract was up.”

Heussaff herself giggled in recollection of that fateful night. “A close friend was also their (Chan’s) neighbor. Nahihiya ako because I didn’t know them at all. Then there was a band and I joined in the singing. It would turn out they’re really nice people, and they’ve been very kind to me.”

(Her Bench coming-out party was dubbed “La Nuit de Solenn,” or “Solenn’s Night.” She sang two other songs from her new album after a costume change. She slipped into a black Bench Body bra and a beaded sheer black skirt.)

She has no qualms about baring skin—“as long as it’s artsy and well done,” she clarified.

“I don’t think I’m going to do beyond what I did for Esquire, though. Otherwise, they will all just be the same,” referring to the magazine cover where she posed au naturel.

The young woman is so comfortable in her skin that she didn’t mind being Sultry Solenn in front of Mom and Dad.

“They’re very supportive, I know,” she said. “It was actually my mom who used to push me to sing for people, but the more she’d make me, the more I wouldn’t do it.”

Heussaff believes the Bench Body brand is a good fit for her. “I dress super casual on the outside, but I like to wear nice things underneath. I want to feel sexy for myself, even when nobody can see it.”

Heussaff has good genes to thank for her pretty face and svelte frame. But maintaining a figure that would sell underwear and be worth baring for billboards takes work. She does yoga every other day, and biometrics exercises. She also runs.

She watches what she eats—only grilled stuff, no fried foods, and only fruits for snacks. She also juice-cleanses every three months.

“I used to be able to eat anything,” she said. “Now that I’m 28 mas mahirap na. When I cheat, I like crispy pata, lechon, laing, pancit. Sometimes I’ll have a big breakfast of croissant and scrambled eggs.”

Her efforts at eating healthy have given rise to a new business venture. Next month, Heussaff and her friends will open a bakery-brunch café-bar at Rockwell in Makati City called Hatch 22, which will specialize in healthy meal alternatives.

“If people want to know about my diet, they can come and eat in the restaurant. My brother Erwan,” the foodie-blogger and boyfriend of Anne Curtis, “came up with the menu,” Heussaff said. “He’s the one who really advocates healthy eating.”

This multi-hyphenate also hopes to fulfill another dream: to collaborate with Bench in a clothing or underwear collection. Heussaff studied fashion in France, and was a budding designer

before the lure of show biz beckoned.

Call her actress, model, singer, host and even fashion designer, but don”t make the mistake of calling her “It Girl.”

“I hate it!” she said, you could almost feel her cringe. “I don’t know what it means! Maybe because my friends are…” Then she quickly added, “Anyway, I’ll take whatever comes my way.”

Well, perhaps next time, it will be “Solenn: Bench model-slash-designer.”