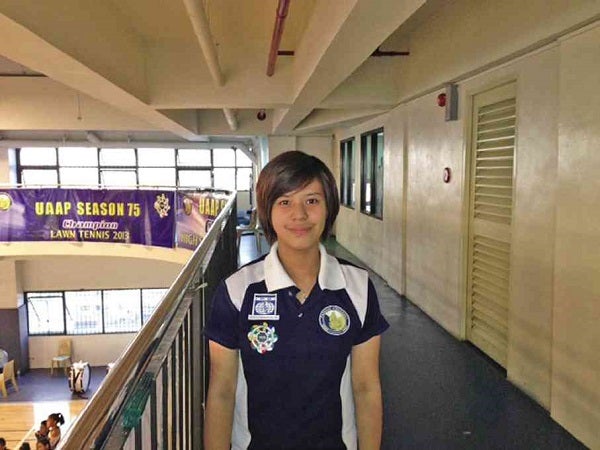 A woman in a man’s (chess) world

At first glance, one would think that a petite and demure first year college student like Jean Karen Enriquez would not be capable of standing up to a man. Yet this is what this 16-year-old lady has been doing all along—on the chess board, that is.

“The first time I saw her play chess and beat every guy in the AAP, I knew right then and there that I had to have her on my team,” says National University (NU) chess coach Jose “Jojo” Aquino Jr. “She is a strong tactical player and tries to win every game by attacking early. As a woman chess player, her style of play is simply commendable.”

Back then, Karen was still playing for the high school team of Adamson University, a perennial rival of NU in the UAAP chess wars. Her impressive style of play—which Jojo says can easily beat any FIDE (Fédération Internationale des Échecs)-rated male chess player today—did not go unnoticed.

As soon as Karen finished high school, various college coaches started offering her a slot in their respective chess teams. Aside from NU, other schools like the University of the Philippines and Adamson, her high school alma mater, tried to recruit her. She had a hard time deciding because her parents had wanted her to take up dentistry in another school.

But coach Jojo and her love for the game prevailed. “I chose NU because I wanted to continue playing chess. I want to become a strong chess player like Jerad Docena. I’m sure, with coach Jojo’s training, I’d still be able to learn more,” beams Karen.  Jerad is one the most famous young Filipino grandmasters today.

Together with male members of the NU varsity chess team—Ryan Magtapuc, Vince Medina, John Rey Batucan and Antonio Almidal—Karen trains under coach Jojo at the NU chess room every Monday, Wednesday and Friday. They meet up at 3 p.m.—covering a lot of topics, from improving her chess-playing skills  to becoming more patient and focused during games.

“She’s already got the talent,” says Jojo. “My job is to ensure that she keeps playing and develop more confidence without being too overconfident during actual games. That way, she’d be able to fulfill her dream of becoming a highly rated chess player, or even become our very first woman grandmaster.”

Karen reveals that playing chess was not really her first sport. She had been playing basketball with her friends, but they’d often tease her playing style to the point of bullying her, so she stopped.

At the same time, she got intrigued when she saw one of her male cousins wearing a chess varsity uniform. She somehow envied him since he didn’t have to attend school regularly, yet he still manages to get good grades.

Karen started hanging out at the Marikina Chess Club in Calumpang to learn about the sport. Then barely 10 years old, no one taught her to play chess—she simply watched and learned. That same year, when the Rotary Club of Marikina organized a chess tournament, she joined as “saling-pusa” but surprisingly won first place.

She soon developed an affinity for chess, even playing at Luneta on a wager, mostly with male players. She also kept on joining tournaments in and out of school, soundly beating a number of her mostly male counterparts one after the other.

The rest is history. In 2011, she joined the annual Shell National Youth Active Chess Championship and emerged as grand champion in the girls junior division. This year, she won the third leg of the Shell chess tournament in Batangas with an impressive record of nine straight wins with not a single loss. Such a feat is considered unprecedented for a woman chess player, especially since this is the first time that male and female players competed against each other in a grueling round-robin tournament.

Jackie Ampil, social investment manager of Pilipinas Shell, believes that this year’s chess tournament is not just meant to help the youth develop positive values and keep away from vices. “It is also a testament to a slowly emerging trend that girls, too, can achieve what their male counterparts could do if they put their hearts and minds into what they have set out to do,” says Jackie. “I’m proud of what Karen has achieved thus far and I hope that she’d continue to perform well during the grand finals in September.”

The Shell National Youth Active Chess Championship is a legacy program of Pilipinas Shell that has been running for the past 21 years. “Aside from our focus on environmental management and protection, developing new energy sources, promoting road safety and awareness among others, our nationwide chess program is one of our innovative methods in developing the potentials of Filipino youths to become productive individuals while helping the country move towards progress,” adds Jackie.

Karen, for her part, is likewise optimistic of her chances this year. She feels confident enough that she now has what it takes to win. But more than winning the title, Karen says that she’ll feel a lot better if she could beat more male chess players in the process. “It would give me a greater sense of pride,” she says.

And why not? In a sport dominated by males, a young lady named Karen is now inching her way to the top.