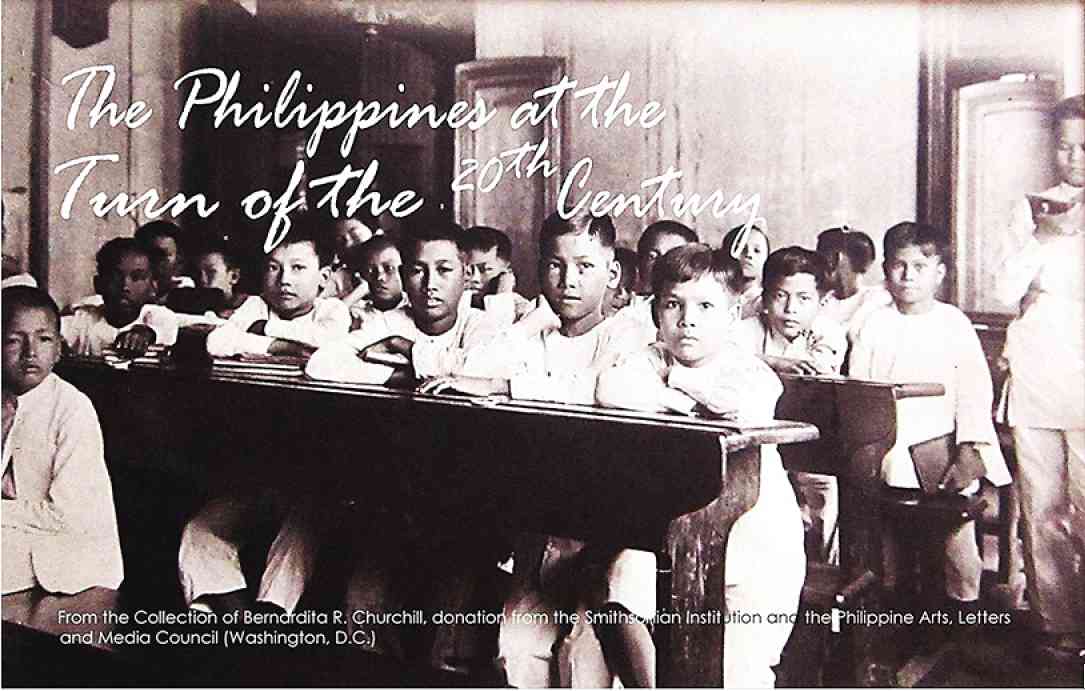 A schoolroom of Filipino boys

An exhibit of vintage photographs on the Philippines at the turn of the 20th century is on view at the National Commission for Culture and the Arts (NCCA) Gallery in Intramuros, Manila, until Aug. 30.

Some 40 photographs constitute a documentary of sorts of the history of the Philippines and Filipinos from the Philippine Revolution against Spain and the Philippine-American War (from 1896) through the first decade of the 20th century with the rise of “modern” Manila.

The exhibit is a project of the Manila Studies Association (MSA) with the NCCA, and in commemoration of the sesquicentennial of the birth of Andres Bonifacio and the celebration of History Month in August. On Sept. 16, it will open at St. Scholastica’s College, Manila.

The photographs are from the collection of historian Bernardita Reyes Churchill, president of the MSA and of the Philippine National Historical Society.

These came from two collections in the United States. Half of the photographs are from the Anthropological Archives of the National Museum of Natural History of the Smithsonian Institution in Washington, DC, and were exhibited in May-June 1987 at the Dillon Ripley Center, Smithsonian Institution, during the National Asian Pacific Heritage Month. After the exhibit, the photographs were sent to the collector so they could be available for exhibit in the Philippines.

The other half of the exhibit consists of photographs from an album donated to the Washington-based Philippine Arts, Letters and Media Council (Palm) by the family of Capt. James Monroe Liddell, a veteran of the Spanish-American War in the Philippines (1898), through Jeane Olson and family, with the express wish that the photographs be made available also for educational purposes through exhibits in the Philippines.

Liddell, from Carrollton, Mississippi, came to the Philippines with the American forces in 1898 at the time of the Spanish-American War.

The album has 82 photographs documenting important historical events and scenes of Philippine life toward the end of the Spanish colonial period and the beginning of the American regime from 1898. Each photograph was meticulously labeled by Liddell, with some of the captions reflecting his impressions of Philippine events and of the people they recorded.

Liddell remained in the Philippines after his military service and served as a judge in a municipal court in Manila. He engaged in the timber business in Mindoro, where he had a homestead planted to coconuts. He also operated a Chevrolet car agency in Manila. He died of cholera in 1915.

His son Frank was interned at the University of Santo Tomas during the Japanese Occupation of the Philippines (1941-1945). Frank Liddell survived the internment “only because of Filipino friends who surreptitiously passed food to me through the fence surrounding the prison…at considerable risk to their own lives,” in his own narration to a family member.

Palm is an organization of Filipinos, Filipino-Americans and friends who have a special interest in Philippine history and culture, especially art and literature.

Originally called the Philippine Reading Association, Palm was organized at the Philippine Embassy Library in Washington in June 1987, with the encouragement and inspiration of Bienvenido Santos, noted Filipino novelist and poet. Among Palm’s founding members was the late artist Pacita Abad, noted for her trapunto paintings.