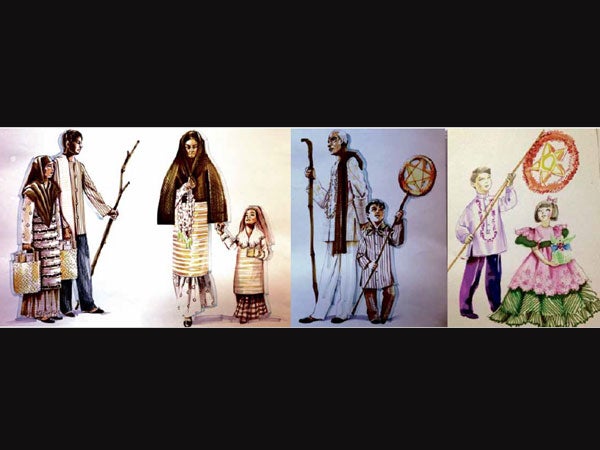 THESE four Damian Domingo-inspired designs by Barge Ramos, as illustrated by colleague Danilo Franco, became the basis in 2009 for life-size dioramas dressed in authentic Filipiniana costumesmade mostly of indigenous fabrics that were to become part of the Vatican’s annual Christmas display, depicting how a featured country celebrated Christmas through the eyes of the family. But before Ramos could beginworking on his set pieces, the ambassador had already contacted aDavao-based artist to do the job.

If you take it from fashion designer and leading illustrator Danilo Franco, anyone can draw. If there’s one form of expression that can be learned, it’s drawing.

The results may not be as beautiful and polished as the twin series of Filipino-theme Christmas images Franco and fellow designer Barge Ramos collaborated on in 2009, but the ability to draw is innate in every person.

Otherwise, Franco, who, for more than 30 years now, has been the go-to illustrator of not a few designers and women’s fashion magazines, wouldn’t be wasting his time teaching illustration subjects to Fashion Design students at the School of Fashion and the Arts (SoFA) in Makati.

Franco became known for a specialization that wasn’t highlighted in the fashion industry—fashion illustration.

Yet it was in fashion illustration that Franco has built his following, even among his contemporaries and other fashion designers. They give him recognition in this area that’s taken for granted.

And it is also this expertise that this veteran designer-illustrator now chooses to share with the next generation.

Apart from basic and advanced illustration, he also teaches fashion subjects at SoFA.

Years ago he conducted short illustration workshops at the Philippine Women’s University.

Apart from illustrating the designs of colleagues such as Ramos and Ben Farrales, Franco used to “re-illustrate” drawings submitted by various designers to such magazines as Woman Today and the defunct Manila Women’s Wear.

Based on their feedback, Franco’s colleagues seemed happy with the results. Not a few were genuinely appreciative, he says. Some of these designers, who are now based abroad, get in

touch with him now and then to thank him.

It wasn’t that their drawings weren’t good, says the master illustrator. He cites Gaupo, for instance, as one such designer who really knows how to draw. The magazines just wanted “uniformity” of sketches featured on their pages.

“Throughout my years of teaching, I have proven that drawing can be taught in 99 percent of the cases,” says the Fine Arts graduate from the University of Santo Tomas.

As early as his student days, Franco worked as layout artist in the Philippine Daily Express. He later applied as in-house illustrator for Farrales.

The early stint introduced him to the world of fashion. Before long, he was showing his own collections with other contemporaries such as Ramos, Danny dela Cuesta and Chito Vijandre.

“The talent for drawing is innate,” says Franco. “You only have to revisit it. Remember, all of us started drawing when we were kids. And we all produced honest, graphic drawings because we didn’t have inhibitions. The details themselves oftentimes became symbols.”

If one is diligent enough, the long hours he or she puts into honing the skill could produce beautiful illustrations.

“In every design process, there are steps or procedures. Even in drawing, there are formulas,” he says. 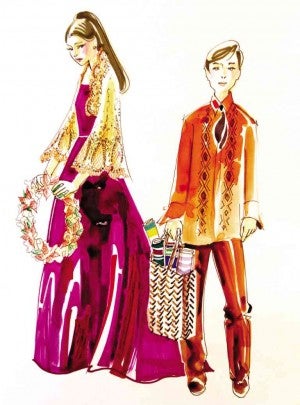 As designer himself, Franco knows the importance of good illustration. It’s a tool, he says, that designers need to communicate their ideas to clients, and in the case of hired talents, owners and investors.

“And even if you don’t end up as a designer, knowing how to illustrate would serve you well as  merchandiser or stylist,” he says. “Again, it’s a skill you would need  to convince and influence other people.”

Of course, it’s pretty common in fashion to come across clothes that look better as drawings on paper. That’s why he always tells his students to strike a balance between “illustration and the technical side of it.”

Computer-savvy designers could always resort to clip art and CAD (computer-aided designs) in lieu of illustrations, but the results, as one of Franco’s students confesses, are far from “soft.”

“The results, she says, lack soul,” says Franco. “That’s why despite being proficient in computers, she still enrolled in my class.”

In 2009, Ramos asked Franco to illustrate his ideas that Ramos hoped to turn into a series of life-size dioramas, complete with costumes, for the Vatican’s annual outdoor Christmas display.

Since he had ready access to abaca, cotton and piña fibers, Ramos, through the Fiber Industry Development Authority (Fida), was poised to produce Filipiniana costumes, including native props such as a woven bayong laden with exquisite handwoven local fabrics, to be worn by mannequins.

He even made a deal with a local company doing Christmas belen for export to do the body molds. The outdoor dioramas would have been the first of their kind from the Philippines, to be put up in the Vatican, seen by people from all over the world.

“Every year, one country is chosen by the Vatican to create its own life-size dioramas that show its culture, and how its people pay homage to the Holy Family,” says Ramos.

Apart from Fida, Ramos was coordinating with the then Philippine ambassador to the Vatican and the Center for International Trade Exposition and Missions (Citem).

Initially, Ramos heeded the wishes of then Philippine ambassador to Italy to produce more colorful and “prosperous” images of the Filipino family. It was a total departure from the popular image of a struggling OFW.

“So, I designed four dioramas based on this peg,” says Ramos. “I asked Danny (Franco) to illustrate the designs.”

But even before Ramos could present them, the ambassador to the Vatican nixed the initial idea in favor of lowlier, peasant-inspired images of the Filipino family. The two ambassadors obviously had different visions of how to project the country to the world.

“I had to design a more subdued collection of images also dressed in Filipiniana, and inspired this time by Damian Domingo’s muted paintings. Again, I asked Danny to illustrate them 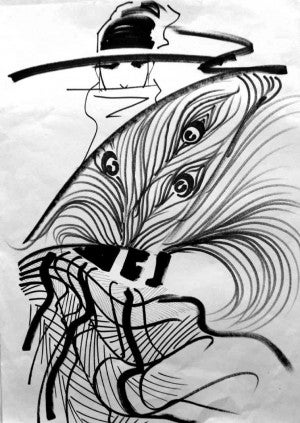 for me,” says Ramos.

But the ideas didn’t go beyond paper. As Ramos was about to submit the second set of images to our ambassador to the Vatican, he learned that the ambassador had already tapped an artist from Davao to design and do the series of installations.

It wasn’t meant to happen, says Ramos. But through the years, he has always been happy with the way Franco and Loretto Popioco, another designer-illustrator, have been reinterpreting his ideas.

“Danny definitely has a distinctive touch,” he says. “His illustrations give life to a designer’s ideas.”