The return of *NSYNC, Ben Affleck as Batman, Miley at the VMAs, and a book you need to read now | Inquirer Lifestyle ❮ ❯ 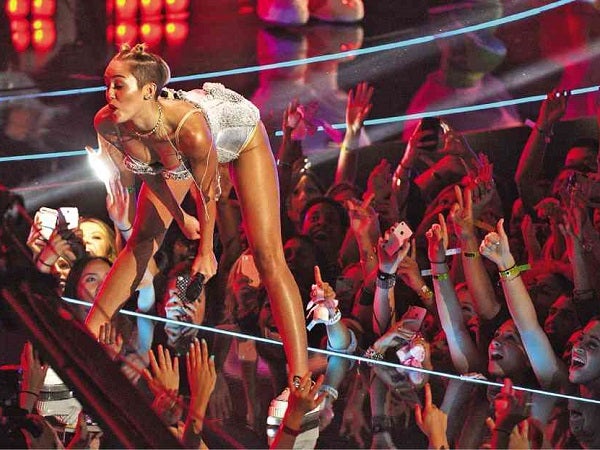 TWERKING IT Miley Cyrus at the VMAs

The return of *NSYNC, Ben Affleck as Batman, Miley at the VMAs, and a book you need to read now

WE REALLY shouldn’t have been surprised. With the successful comebacks of NKOTB, Backstreet Boys and the reappearance of 98 Degrees, why shouldn’t we expect Justin Timberlake and company to hit the stage once again?

Their VMA performance may have lasted only over a minute, but we have a feeling we’ll be seeing more of Joey Fatone soon. The clue? The band signed up on Twitter. (Their first tweet? “Mic check, mic check one… two… is this thing on?!”) You don’t do that for just one awards show performance.

When news spread that Ben Affleck would be replacing Christian Bale as Batman, there was anger among the superhero’s fans, who complained about how Ben might ruin the movie franchise. We would have been among them, except that “Argo” has really softened us up.

And remember, when it was first announced that Heath Ledger would play Joker, people the world over reacted in the same way, too. But he ended up giving us an unforgettable Joker.

We say give Ben a chance. After all, he does have the right jaw for the role. And if the movie franchise survived Katie Holmes, we’re sure it can withstand this new Batman.

Miley at the VMAs

Miley, Miley, Miley. What was that all about? We’re no stranger to coming-of-age performances, as well as to shocking VMA numbers (remember the Britney and Madonna lip lock?), but yours was barely a performance.

It was like watching a toddler high on sugar stomping around the living room and shaking her diapered butt just to get attention.

Miley, dear Miley, give twerking a rest, put your tongue back in your mouth, put some clothes on and sing, really sing, the way we know you can. You have good pipes, you don’t need the crazy furry stripper routine.

And poor Robin Thicke, the collateral damage in this stuffed bear-infested insanity. We like your song, dude, we really do, but now all we can see are your striped pants and Miley rubbing her butt against your crotch. And, like your mother said, we can’t make the image go away. (P.S. That “Miley twerks on famous paintings” meme is actually pretty funny.)

In related news, “twerk” has made it to the Oxford Dictionaries along with “selfie,” “cake pops,” “emoji,” “geek chic,” “unlike” and “srsly.”

The official definition of twerk: “Dance to popular music in a sexually provocative manner involving thrusting hip movements and a low, squatting stance.”

Beauty queen of the week

“Ooh, a funny beauty contest Q&A! We love those!” we thought when we first saw the video on Huffington Post. Then we clicked play. “Uh-oh, she’s Pinay?”

Yes, Joanlia Lising, who was competing in the 2013 Miss Philippines USA, has become a viral hit because of her answer to the question, “Among the five senses, what do you prefer to have if you could have only one and why?”

Joanlia said, “If I have to pick out of five senses, I’ll pick seeing because seeing is the best sense that we can ever see because seeing is believing and believing into what you see is perfect. Out of all the senses, uh, seeing would really be wonderful because… thank you, that will be all.” And then we all cringed.

We are still in the middle of reading it, but we just have to tell you: Buy this book, now. Warning: You might want to cancel your plans for the day because you wouldn’t be able to put it down.

“Night Film,” the second novel of the “Special Topics in Calamity Physics” author Marisha Pessl, is a suspenseful mystery thriller.

Marisha takes you on a journey with investigative journalist Scott McGrath as he looks into the death of 24-year-old Ashley Cordova and tries to uncover the truth about her father, the elusive and reclusive cult horror film director Stanislas Cordova.

The book comes packed with multimedia content—from notes, interview transcripts and newspaper clippings, to creepy pictures and web pages from the deepest recesses of the Internet. And if that’s not enough, get the app.

You can find content online, too, including found footage and mysterious Cordova sightings.

You will get creeped out, guaranteed.

While we found the details of her surrender questionable (no handcuffs, really?), we’re glad Janet Lim-Napoles is now in police custody. But this is only the beginning.

Now we want the whole truth—who were involved in the pork barrel scam? Who else has been stealing our money? How are they going to pay?

Like every other angry taxpaying citizen, we have our eyes on the proceedings. Don’t mess this up, Philippine government, your bosses are watching.